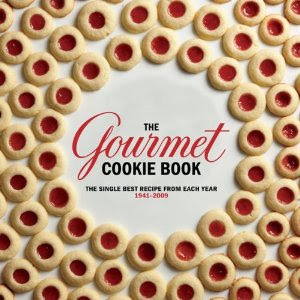 I think if I had my way, this cookbook would be called the Gourmet Retro Cookie Book instead of just the Gourmet Cookie Book: The Single Best Recipe from Each Year, 1941-2009". I loved the idea of having one representative recipe from each year for almost seventy years, and it was really interesting to see words change (cooky used to be the preferred spelling, crazy!), recipe layout change, and how technology has made some recipes that used to be complicated so simple.

The recipes are printed as they were printed in Gourmet Magazine through the years, but each one has editorial notes. I found these to be very helpful, often including information on using appliances that didn't exist when the recipe was published to make it easier, as well as hints as to what a step should look like, a shortcut, a substitution, or freezing/bulk suggestions. I definitely followed some of the editorial suggestions in both recipes I made, and they added a lot of clarity to the process.

The pictures in the book are interesting too - everything is an aerial shot, very simple, but it is always nice when a cookbook has a photo for each recipe, and this one does. The first recipe I made from the Gourmet Cookie Book, was the very first recipe, Cajun Macaroons, from 1941. I'm still not quite sure what makes them "Cajun," exactly, but they appealed to me because I had egg whites in the fridge and almond paste in the pantry, and beyond that they only required three more ingredients.

These cookies were fantastic. They look a little bland, but they have so much flavor, and an interesting texture with a crunchy outside and chewy centers. Super easy in my food processor, and I'd make these again in a heartbeat. The other recipe I made was from the 1990s, Mocha Cookies. According to the Gourmet Cookie Book, the 90s were the chocolate decade. These are shamelessly rich and super addictive, and I will make these again for sure. My only complaint is that the recipe makes it sound like you should mix them as little as possible (I always assume that with the "fold" word instead of "mix") but I had a few that didn't taste sweet at all because the unsweetened chocolate was the prominent ingredient. So when I make these again, which is going to happen for sure, I'll just mix it all a little better.

I wondered if buying this cookbook was redundant, because so many recipes from Gourmet magazine are traditionally available on Epicurious.com. But from what I can tell, the recipes on that website don't go back this far, and I couldn't find either there. This is a great retrospective cookie recipe collection that I think is a great addition to any kitchen. And honestly, who doesn't feel a little nostalgic about the demise of Gourmet Magazine? Retro... nostalgia... it suits baked goods somehow, especially during the holidays.

And just for full disclosure, I did get access to this title through NetGalley, so thanks to them for letting me take a look!
at 4:58 PM

Jenny-
I just realized you are from Greenville--my family roots!!! Oh how I would love to have a Henry's Smokehouse Hog off Wade Hampton or watch the falls of the Reedy River. Glad to see you are a fellow Gourmet lover--I miss that magazine dearly.

I've lived in Greenville 4.5 years and I really love this area! Although it is far too cold right now. It is a great place to be from. :)

I received this cookbook for Christmas -- haven't baked anything yet, but I really appreciate the nice review of the items you baked! Happy Baking, Jenny!