Don't adjust your set. They really are that color. Ack! Well, let me explain....

I was preparing cupcakes for my annual student workers meeting, and I had been foiled on every count for the non-chocolate cupcake. The store was completely OUT of pumpkin, both Thursday and today. Apparently this is not because people are getting excited about making fall desserts once we're past Labor Day, no. Some guy regularly comes in and buys all the cans to feed his dogs. *shakes fist* I really wanted to make pumpkin cupcakes with maple cream cheese frosting, but didn't want to go to Wal-Mart.

Another favorite is red velvet, of course, particularly here in the south. I had a bunch of food coloring on hand, everything but red. I decided that blue velvet would be cool (and possibly more appealing than neon green, which I also seem to have in abundance). Blue velvet! Like blue suede! Or like the horse story! I squirted an entire tube in, and ended up with more of a teal. 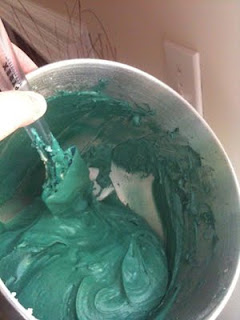 Well, teal isn't all bad.  They were for my music library student workers, and the two official decor colors for the music building are purple and teal.  I could say I did it on purpose!  Sure, let's go with that. It tasted okay, not too chemically (a clear sign I did NOT use enough dye, ha), and I decided to just go ahead and see what happened when I baked them.

As you can see above, that teal turned into a deep forest green with a few blue undertones.  I guess I can blame the butter, or the buttermilk.  That is not teal.  That is definitely not blue!  It is more of a.... okay, it is green.  And everyone knows you should not make food green that didn't start out that way.  It makes people think of mold and decay.  I could have started over, but as usual I had left my baking project until the last minute, and it was too late to turn back.

I thought about making some kind of atrocious icing color, maybe make use of those neon food colorings for once, but decided to just let the cream cheese icing be, and sprinkled a few candy pearls on top.

By the way, I used the red velvet cupcake recipe I found on the Brown Eyed Baker blog, which she in turn found in the Hummingbird Bakery Cookbook

, and was very happy with the texture.