I initially started out with the grand idea (not necessarily a new idea) to have 12 Days of Hot Chocolate in December. That turned out to be a crazy amount of sweetness so we went for every other day instead. Sometimes I post pictures to post with books I'm reading, so many of these are not solo hot chocolate pictures.

You can see the other recipes I was considering over on Pinterest, as well as some of the hot chocolate additions that are fun like Polar Bear marshmallows and frozen whipped cream shapes. One hot chocolate I really meant to make but never got around to is gingerbread hot chocolate, but once Christmas is over it just does not feel like gingerbread season anymore (says the baker who posted a gingerbread scone recipe in January.) 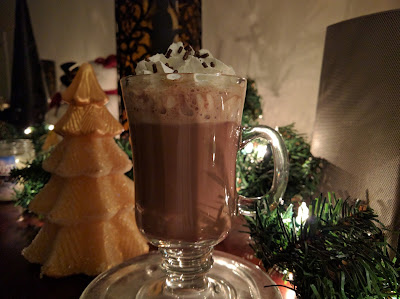 Considering my cold weather island obsession, it is not surprising that I would start with a self-declared recipe for Icelandic hot chocolate. The blogger had been to Iceland and discovered that they added a little bit of salt, and the recipe I'll link to is her interpretation of what she consumed gallons of while in that country. For our tastes, I added quite a bit more sugar and chocolate, so what is pictured (with chocolate sprinkles) is not exactly the recipe. It was our first night of hot chocolate, and we were hoping for richness.
Recipe: Icelandic Hot Chocolate 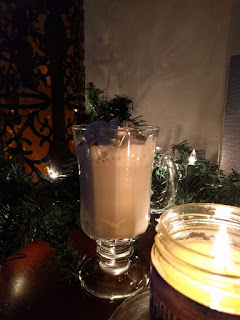 This was hands-down our favorite hot chocolate. It was a surprising lead for multiple reasons - neither my husband nor I are big fans of white chocolate, and the green cardamom held potential to taste more like chai. Instead, this was sweet but not too sweet, fresh because of the orange, nuanced with the cardamom, and I ended up sad I only made a half batch, just enough to taste.

The recipe comes from a chart I randomly found in Pinterest that doesn't seem to link anywhere externally, although surely it originates from somewhere. I will copy the ingredients here so you can try it. Most of these hot chocolates, I just whisk together over medium-low heat until they are steamy but not boiling.

The recipe actually instructs you to put the chocolate in a bowl, heat the other ingredients and strain into the hot chocolate, stirring until it is melted and smooth. 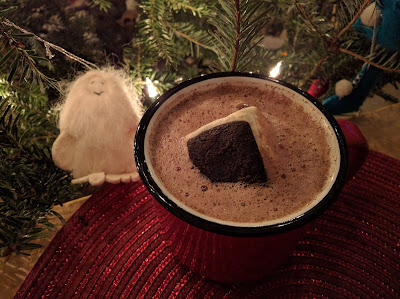 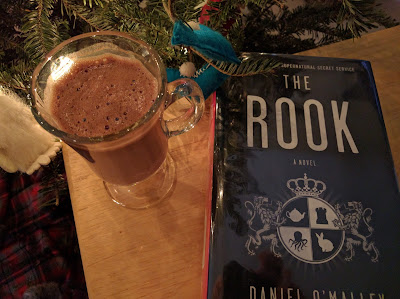 I was reading a book set in London, and had been intrigued by this recipe, so I made this during one of the days I had off by myself. It seemed possibly too strange to be good, but I really liked it. If you don't know, a London Fog is an Earl Grey tea latte, often with vanilla flavoring too for some sweetness. I go through phases where I make tea lattes for myself, probably starting soon!  This was the richest of the recipes I made. First you steep earl grey in a mixture of milk and cream; I used my own Reading Envy tea blend because it has earl grey but also some black tea. Then you mix in some bittersweet chocolate. There is maple syrup in there too, although I didn't make the maple whipped cream that goes on top in the recipe. This is a great one for a blustery day or night and I will likely make it again.
Recipe: London Fog Hot Chocolate
at 12:00 AM