A few years ago, I had just started learning how to bake in a lower-carb, lower-sugar fashion. I made a carrot cake from The Joy of Gluten-Free, Sugar-Free Baking that looked beautiful but neither of us could eat. The reason? There are copious amounts of artificial sweetener in both the cake and icing, and while these don't seem to bother most people, neither of us could force it down. I still have the book on my shelves and after a few years of experimenting with this kind of baking, I thought I could try it again, making a few substitutions, like using coconut sugar instead of Splenda, etc. 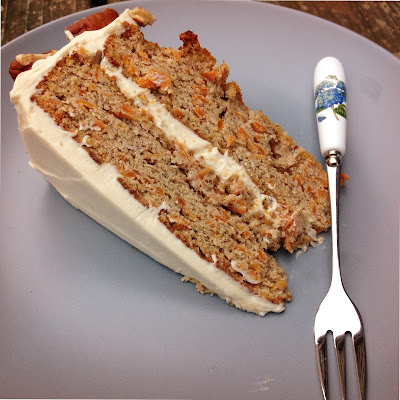 Verdict? Sigh, well, still not great. It LOOKS good. But the taste was still not there. I underutilized the coconut sugar so the cake part itself wasn't sweet enough, and I used brown sugar Splenda in the icing, something which works fine in our cinnamon toast but somehow was too obvious here.

I'm posting it anyway. I want people to know how bloggers do more work than you ever see because we make mistakes or ideas don't work the way we expect. This is one where I'm still not at the place I want to be with this one. I'll include the original recipe below from Peter Reinhardt and Denene Wallace, and mark the changes I made. The texture of the cake itself is fine, not too moist, not too dry, cakelike enough for those of us used to sugar-free baking. It's the taste that just isn't there. And it might be that carrots aren't a great idea for low-sugar baking to start with, as they are pretty high in sugar!

Preheat the oven to 325 F. Line the bottom of two 8-inch round cake pans with parchment paper, then mist the inside walls of the pans along with the parchment with spray oil.

In a medium bowl, combine the coconut flour, pecan flour, shredded coconut, Splenda, baking powder, salt, and cinnamon and whisk until well mixed. In a large bowl, whisk the egg whites, milk, butter, vanilla, and liquid stevia together until thoroughly blended. Stir in the carrots. Add the flour mixture and stir with a large spoon for 1-2 minutes to make a thick, sticky batter. If the batter is too thick to pour, add a little more milk.

Pour the batter into the prepared pans. Use a spatula to evenly spread the batter, or jiggle the pan to evenly distribute the batter in the pan. Bake for 35 minutes, then switch racks and bake for about 30 more minutes, until the cakes are lightly golden and springy when pressed in the center and a toothpick inserted into the middle of each cake comes out clean. Let the cakes cool in the pans for at least 20 minutes.

Meanwhile, make the frosting. In a bowl of an electric mixture or a large bowl, combine all the frosting ingredients and mix with the paddle attachment on medium speed or stir vigorously with a large spoon until thoroughly blended. If using an electric mixer, switch to the whisk attachment and mix at medium-high speed for about 3 minutes, until the mixture is fluffy and very creamy; if mixing by hand switch to a sturdy whisk and beat vigorously.

As the cakes cool, they should shrink from the pan walls; if not, run an icing spatula or a thin knife around the edges. Invert the cakes onto two plates. They can be eaten as they are or be frosted, either singly or as a new two-layer cake. For a two-layer cake, spread some frosting over the top of the lower layer, spreading it to an even thickness of about 1/4 inch. Position the second layer on top and then spread the remaining frosting over the entire cake. Sprinkle the pecans, coconut, or both over the top and/or side of the cake if you like. Keep refrigerated.