One of the recipes I wanted to make for Christmas was postponed to New Years Eve, because we had way too many sweet things already! I based this recipe on "Brownies My Way" in The Artful Baker by Cenk Sönmezsoy. He has several brownie recipes in the cookbook, and "Brownies My Way" were slightly less sweet and also included pistachios. I adapted it slightly for my ingredients on hand, and adding peppermint elements. Please see his cookbook for all his brownie variations! 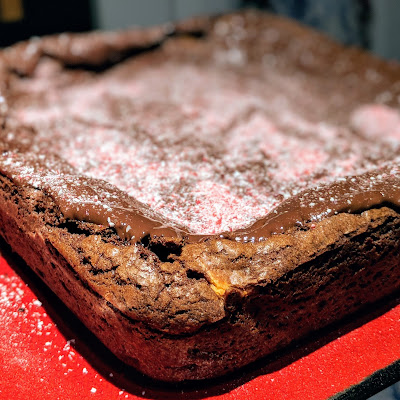 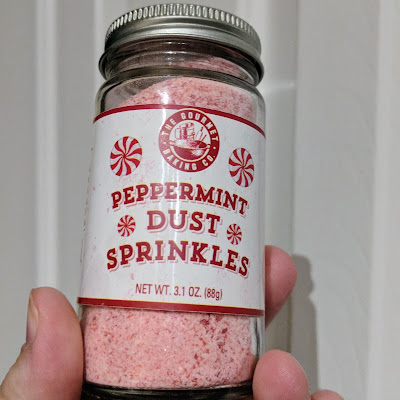 Preheat oven to 350 F and prepare an 8 or 9" square pan with buttered parchment paper.

In a pan set over barely simmering water, melt the butter and chocolate until smooth. Allow to cool completely. Mix in peppermint extract, if using.

In a mixer with a wire whisk attachment, beat the eggs and sugar at medium-high speed until sugar has dissolved, mixture is light in color and slightly thickened, 4-5 minutes. Scrape in chocolate-butter mixture and mix at medium speed until incorporated, about 30 seconds.

Stir together the flour, cocoa powder, and salt. Add to mixer at low speed and only mix until barely incorporated. Remove from mixer and stir in peppermint chunks.

Spread into pan, and bake 25 minutes or until toothpick comes out with gooey (but not liquid) crumbs. Allow to cool.

Melt chocolate (I just used the microwave) until smooth. Cool slightly, then spread over cooled brownies. Top with desired topping. Chill at least one hour before serving (after this initial chill the brownies may remove at room temperature.) 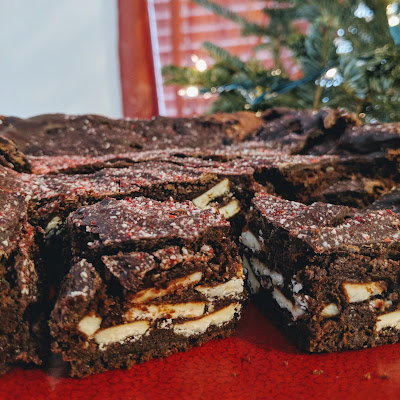 Verdict: These were delicious. To go over the top we had brownies with Jeni's dark chocolate peppermint ice cream, at around 11:30 pm, so definitely the last dessert of the year!
at 3:04 PM