One of the big reading challenges to hit social media in 2018 is #theunreadshelfchallenge2018, where a bunch of bookish people are trying to read books on their shelves. This ranges from reader to reader, from exclusively only reading books they already own to trying to read more of them. For me, it manifested in attempting to go for 50/50 (which would be an increase of over 20%). I'm also working on a cookbook project where I spend each week with a different cookbook already in my collection. At the bottom of this post, I'll post the cookbook and reflect on the experience of cooking from it this week. 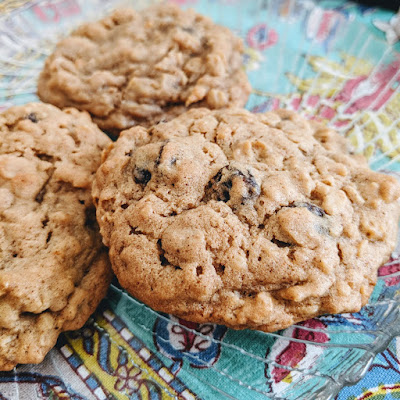 Cream butter and sugar until light and fluffy. Gradually add sugar. Add eggs, vanilla, and water, and beat until smooth.

Sift dry ingredients together. Add to the butter mixture and mix well. Fold in oats and raisins.

Drop by spoonfuls onto a greased cookie sheet, leaving enough space for the cookies to spread. Bake 8-10 minutes, until golden. 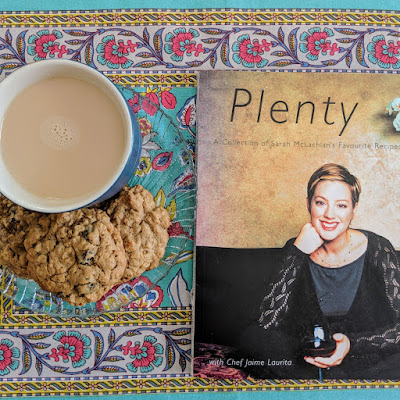 This recipe comes from Plenty: A Collection of Sarah McLachlan's Favorite Recipes, published in 1999, right after the high point of Lilith Fair and her very busy touring life. And actually it isn't her favorite recipes as much as it is the recipes chosen by her personal/tour chef. I had marked more recipes than I ended up making from this cookbook, because although the cookies were decent, the savory recipes I made were badly in need of updating into the 21st century. The cookbook apparently came out before they had even heard of olive oil! I made the curried orange lentil salad recipe exactly as described and it was awful; the lentils were overcooked and the raw onion was too strong (I already added half of what it said) and the water never fully drained so it was pretty liquid. On a day my husband and I were home due to snow cancellations, I sauteed some leftover kale and heated the lentils up, trying to salvage it as a soup. It was okay but too vinegary for a soup. AFter that two day fiasco I crossed off the vegetable curry from the recipes to try. It was going to be a lot more work and I wasn't convinced it would be worth it. I did make the creamy mushroom-sherry soup but hardly used the recipe as written. I replaced vegetable oil with olive. I used half the fat and half the flour called for. I used a variety of mushrooms and red wine instead of sherry, shallots instead of onion. It was delicious but I feel like I deserve the credit for that one. I made the chai recipe as described and it was weak. They didn't even have me roast the spices!

So this cookbook is probably one I can let go from my collection. But it had lingered on my shelves for over a decade before this past week.

I'm still a huge fan of Sarah McLachlan though, and this cookbook is a reference to her song Plenty, which is on my favorite Sarah album - Fumbling Towards Ecstasy, from 1993 (! whaaat, 1993? I'm old.)