Growing up in the northwest, we would have "a barbecue" and that might mean a picnic or gathering or potluck, whether it included meat or fire or not. Here where I live in the south, we would never use the word barbecue that way, and barbecue is serious business. In my state of South Carolina alone, there are four different bbq regions (with different sauces) and even a BBQ Trail Map. One of my coworkers has been trained as an official bbq judge. Only in the last few years have I even eaten meat, so I'm still learning about the difference in meat styles. But up to that point (and part of me may still believe this now) I thought that bbq was like Thanksgiving - it's important that the meat centerpiece is good but that people are more interested in the sides. 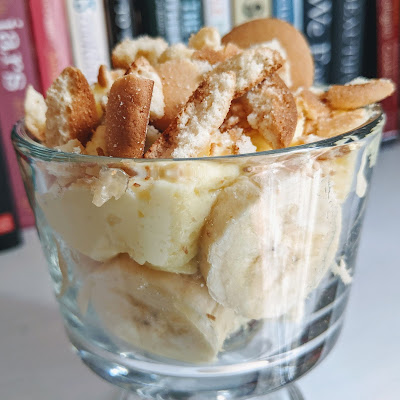 One side you see everywhere in the south is banana pudding, from seafood shacks to the finest dining establishments downtown (ten years ago I made Soby's White Chocolate Banana Cream Pie for friends visiting from Oregon, and I think that was intended as an elevated banana pudding.) But just like macaroni and cheese, a side-dish I also made from this same cookbook, you never eat the same pudding twice. Everyone has their own take, their own technique. This recipe has you assemble the pudding and bananas and cookies at the last minute, where many southerners would have had you put the pudding and cookies together overnight so everything is soft. Maybe we all find our own way.

In a medium bowl, whisk the egg yolks with the cornstarch, sugar, and salt. In a medium saucepan over medium heat, gradually bring the milk to a boil. Gradually whisk the milk into the egg yolk mixture until smooth. Transfer the pudding mixture (back) to the saucepan. Cook over moderate heat, whisking, until the pudding is thick, about 3 minutes. Scrape the pudding into a bowl and whisk in the cold butter and vanilla. Cover with plastic wrap and refrigerate until chilled, at least 4 hours, or overnight.

When you are ready to serve the pudding: spoon the pudding into 6 bowls. Garnish with the thinly sliced bananas and sprinkle all over with the crushed Nilla wafers. Serve cold, right away.

Note: You can serve the cookies without crushing them - just allow 3 per bowl. You can also add a couple tbsp of banana or almond liqueur (or a combination of both) into the pudding mixture right after you transfer it to the saucepan.

*Notes from JennyBakes - I substitute banana liqueur for the vanilla because I've always thought it was strange that the only banana in banana pudding is the bananas! I wouldn't cut the bananas until right before serving, OR put them in a dish and smother with the pudding to chill, and top with the Nilla wafers so they get a little soft... this seems more standard for southern pudding. This recipes leaves the Nilla wafers pretty crunchy. 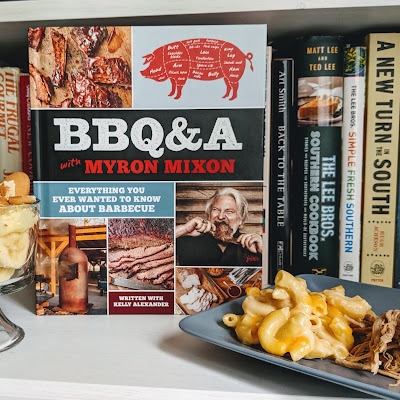 BBQ&A with Myron Mixon came out May 7, 2019, from ABRAMS Books, and has a lot of practical how-to information, diagrams too, that should be an asset to anyone wanting to up their barbecue game.

This post is sponsored by ABRAMS Books, as part of the ABRAMS Dinner Party.
at 12:00 AM