For several years now, I have been on the hunt for ramps.  Foodies and bloggers would rave about them and I would hear how they sold out from the farmer's market by the time I arrived, or they'd be available at my local market for such a short time that I'd either miss it or the selection remaining would be too wilted for any good.

THIS YEAR I KNEW I WOULD FIND THEM.

And I did!  A local market that I seem to spend a lot of time at lately, the Swamp Rabbit Cafe & Grocery, posted a picture of ramps right around closing last Saturday, so you'd better believe I was at their front door at 9 AM on Sunday!  Nobody else was pounding down the door to get to the ramps, but better safe than sorry.  I picked up three bunches to experiment with - two to make ramp gnudi and one to use with eggs. 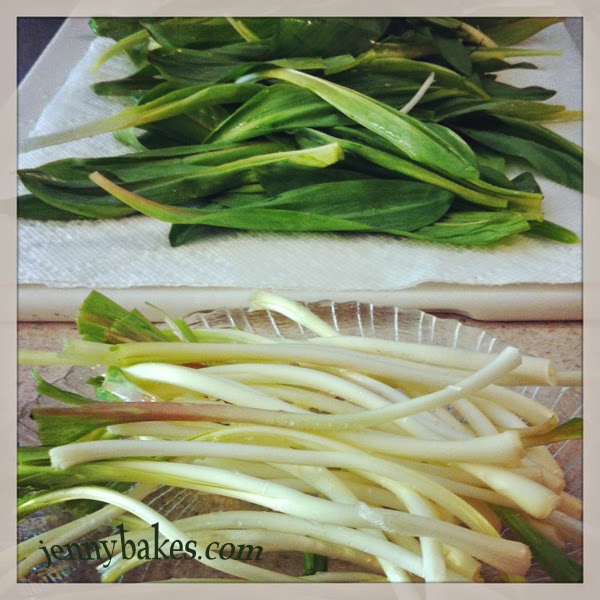 What are ramps?  Ramps are a variety of an onionlike vegetable that grows in the wild.  This requires it to be foraged and resold for them to end up in my hands.  You can eat the leaves, the stems, and the bulbs, but the picture you are seeing above is after extreme cleaning.  The bunches I picked up were caked in mud and the bulbs were covered with a protective skin.

I had been coveting the Ramp n' Ricotta Gnudi I had seen at the Hungry Tigress blog, so that is the first place I turned when the ramps were burning a hole in my ... fridge.  She instructs you to add the greens to the gnudi mixture, but cooked first.  I have a feeling her homemade ricotta had less moisture than what I bought (although I did strain mine), because to get mine to stay together in the boiling water, I had to add parmesan cheese and a bit more flour (I was trying to keep them as low-carb as possible.) 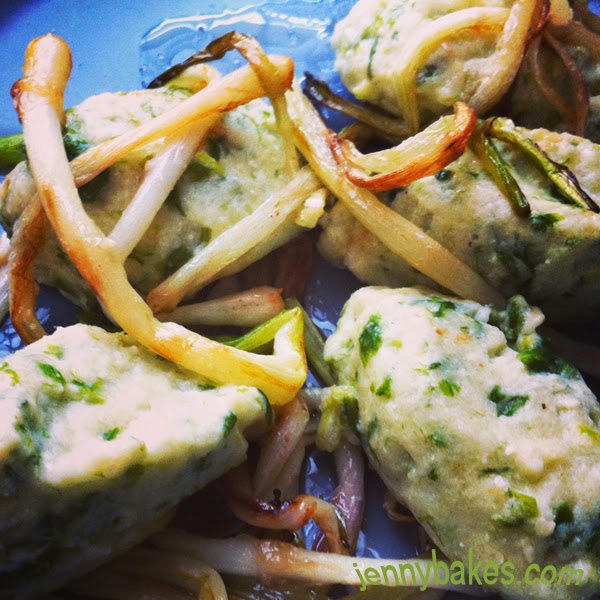 The recipe instructs you to save the stems and bulbs for another purpose, but I couldn't fathom not making this dish as rampy as possible.  So I sauteed them in some olive oil, and served the ramp n' ricotta gnudi with the ramp stems/bulbs, also drizzled with local truffle olive oil.  The flavors of spring!

It tasted pretty good, but I have a weird texture issue with anything dumpling like.  I probably wouldn't make them again but my husband liked them!  Still, I'm just happy to finally get a chance to experiment with ramps!
at 4:00 AM