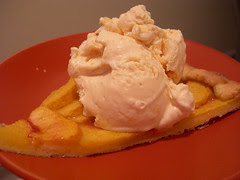 Honey Peach Tart with Fresh Peach Ice Cream
Originally uploaded by watchjennybake.
To anyone looking here for the Daring Bakers challenge, I skipped this month! But I had a sack (known as bag in these parts) of fresh local peaches that I needed to do something with. I decided I had to make fresh peach ice cream, and made a lovely rustic honey peach tart to serve underneath.

Ha, I say that like the ice cream was the main attraction. Actually, the peaches are. It is always a challenge to find recipes that utilize fresh fruit without masking its freshness and flavor completely. The nice thing about the tart is that the crust is rolled thin and only is folded up around the edge, allowing the peaches to be the focus of the flavor. Since they are in one layer, they don't need to be mixed with much, and are in fact layered on top of a sprinkling of flour and sugar and drizzled with honey. The recipe is here but the baking time is 10 minutes too long, so really keep an eye on your crust.

The peach ice cream recipe comes again from The Perfect Scoop, and was interesting because it contained sour cream. The flavor was superb and a great show case for these South Carolina peaches.

For a closing word on South Carolina peaches, I turn to Stephen Colbert. 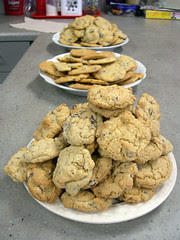 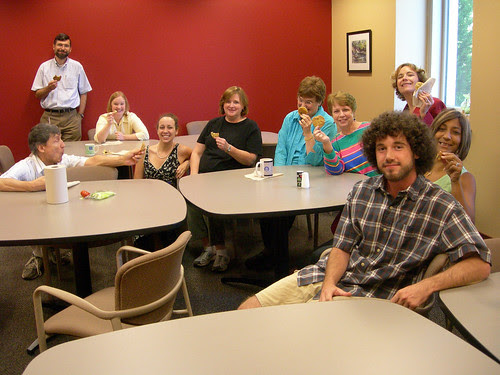 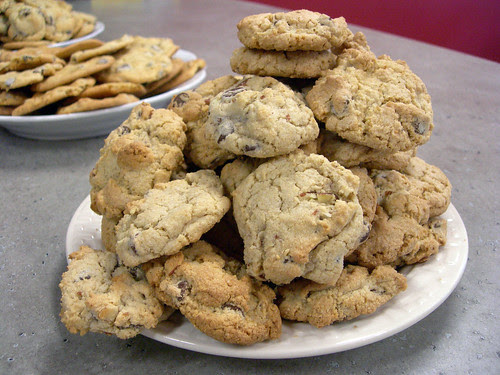 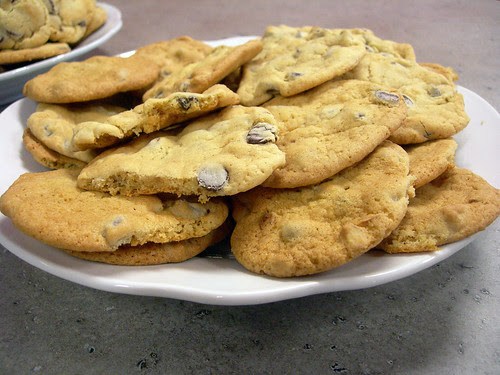 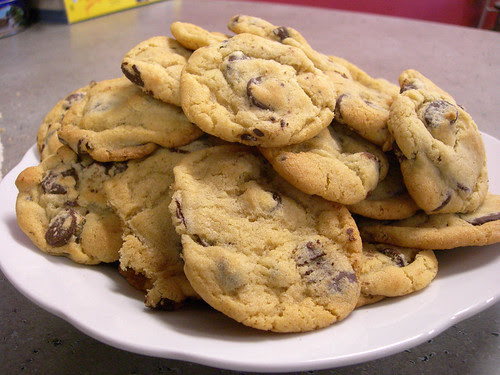 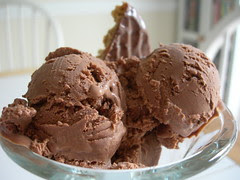 Chocolate Hob Nob Icecream
Originally uploaded by watchjennybake.
I'm not sure if ice cream belongs in a baking blog, but since I got a beautiful ice cream maker for my birthday, I thought I would share about the experience.

With baking, I have made certain things long enough where I really have bake by "feel" in addition to following a recipe. I know the texture things should be before I move on to the next step. My goal by the end of the summer is to develop the same skill with ice cream. Believe me when I tell you it has not happened yet.

The first day that I made ice cream, I had selected pear-caramel ice cream from The Perfect Scoop. I had well-chilled the bowl, and had all the ingredients. Unfortunately, the pears had not ripened. I combed through the book, and didn't have everything for chocolate or coffee, but kept seeing this recipe for basil ice cream!

I happened to have a counter full of basil I had trimmed from my huge plant, needing a destination. Despite the fact that everyone at my house that day seemed to think basil ice cream was a strange idea, I plowed full speed ahead and made it anyway. My new fridge is a Samsung with a quick-chill drawer in it, so after cooling the mixture in an ice bath, I stuck it in that drawer to get chilly quickly. It seemed to work; by the time I poured the mixture into the frozen ice cream maker bin, the mixture had started to thicken. 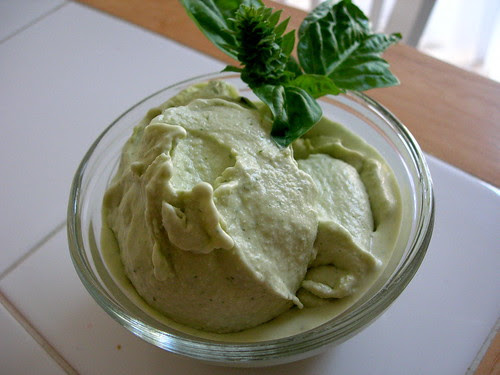 The end result was a lovely, smooth ice cream the texture of soft-serve, although it melted very quickly. I could have put it in the freezer and waited to serve it until it had hardened, but the process is a long one, and we were all ready. Basil ice cream is incredibly summery - not too sweet, very fresh, and if you can manage not to think of pesto cream sauce while you are eating it, it is pretty incredible. I would not hesitate to make it again!

After one success, I thought it would be easy to make something else. When the pears finally ripened, i started off to make pear-caramel ice cream. I'm not sure why, if the recipe just didn't have the same binding agents (no egg yolks in that one) or if I was just simply impatient with the mixture, but after 30 minutes churning around in the machine it never set up at all. If I had been less frustrated, I could have dumped the mixture back into the fridge overnight, but it went down the garbage disposal.

Chocolate ice cream was to be my next feat. However I did not just want plain chocolate ice cream, and I knew I could supposedly add ingredients the last 5 minutes of churning. For some reason, making chocolate Hob Nobs ice cream entered my head and just would not leave. When I realized our friend Brian, who recently moved to London, had a birthday coming up, I decided to make Chocolate Hob Nobs ice cream in his honor. 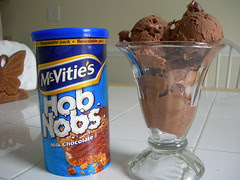 Hob Nobs were one of the things I lived on when I was traveling in the UK, because they are these amazing oaty nobbly cookies with chocolate coating that come in a can, and are easy to stick in a backpack. I came across them at Whole Foods Market and snagged the last two cans!

The first time I tried it, the mixture smelled amazing but didn't set up. I knew I had merely been impatient, because the mixture was thick and coated the spoon just like it was supposed to. I re-chilled it and tried again, and this time it churned up beautifully. I added smashed up Hob Nobs to the churning mixture the last five minutes. We ate a bit of it right out of the ice cream maker, but froze the rest to give it more of a normal ice cream look, which is what you see here. (Happy birthday, Brian!)

Two successful tries down, many more to go. I am also desperate to find a frozen custard recipe, since we miss Ritter's in Indiana. What is your favorite type of ice cream?

ETA: If you are a LiveJournal user, you can now subscribe to this blog using their syndicated feed. 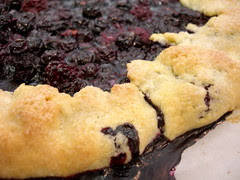 I'm actually not sure there is anything light about this recipe. The crust has a stick and a half of butter, and the berries are mixed with regular sugar.... But who cares, really, it was incredibly tasty.

The cornmeal in the crust was a nice textural addition. I think if I made this again I might make individual tarts, since the large one almost didn't fit on a sheet pan and leaked all over my brand new oven. 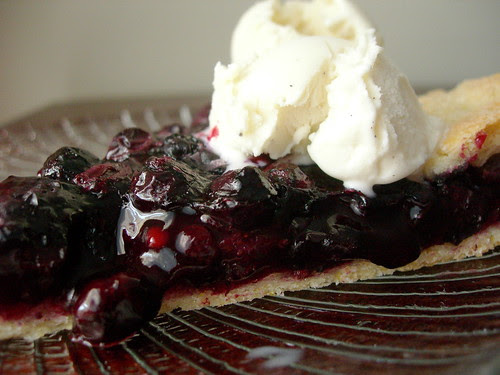 3. Unwrap and place dough on a sheet of parchment paper. Roll dough into a 15-inch circle. Place dough and parchment on a baking sheet.

4. To prepare filling, combine berries and next 3 ingredients (through juice) in a medium bowl; toss gently to coat. Arrange berry mixture in center of dough, leaving a 2-inch border. Fold edges of dough toward center, pressing gently to seal (dough will only partially cover berry mixture).

5. Combine fat-free milk and egg white in a small bowl, stirring well with a whisk. Brush dough with milk mixture; sprinkle turbinado sugar evenly over dough. Bake at 350° for 1 hour or until pastry is golden brown. Let stand 30 minutes; cut into wedges.
Yield