It has been a while since I have made a baked good in conjunction with my Around the World reading challenge.  The past few weeks, I have been reading books set in China.  My original idea was to read Wild Swans, but then Mo Yan won the Nobel Prize for Literature.  I read his novel Big Breasts and Wide Hips (linking to my review), which had a lot of food mentioned, but more often the food of severe poverty, where the peasants were eating anything they could find.

One of the plants growing in the wild where the Shangguan family is trying to live is the scallion:


"Mother took the cloth covering off of her basket, and Zaohua handed her a peeled scallion, which she broke in half and stuffed into a flatcake."

Flatcakes are mentioned throughout the book, and reminded me of a recipe I had set aside for China back in 2011 when I was still researching potential recipes for the challenge.  The recipe for Scallion Pancake, or Cong You Bing, comes from The Best International Recipe Cookbook, put out by Cook's Illustrated.

It makes sense that the families in Big Breasts and Wide Hips would eat something like these flatcakes, because according to food writer Fuschia Dunlop, people in the north are often referred to as "wheat-eaters."  The other book I read for China was Shark's Fin and Sichuan Pepper: A Sweet-Sour Memoir of Eating in China. While she did include some recipes, there weren't any without meat that I could try, and most of the ingredients wouldn't be nearly the same as they would be in China anyway.  But this book made me hungry and I had to stop and make cong you bing just to make it through. 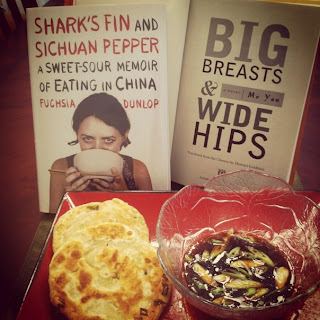 My cong you bing are not as thin as what I see elsewhere on the internet.  The process is a quick bread of flour, salt, and water that is kneaded and allowed to rest.  I actually think that since I made half the recipe and could fit it in my palm, I may have overkneaded the dough.  After resting, balls of dough are rolled out (I used my hands again), sprinkled with sesame oil, scallions, and I added sesame seeds; coiled into a ball-shape, and rolled out again.

These flat pancakey breads are then pan-fried and served with a scallion dipping sauce.  In both books, any time flatbreads were discussed, they were always wrapped around meat of various kinds, despite where Fuschia would travel in China. The breads might change, but it was pretty prevalent.

They were pretty tasty, probably best in the course of a larger meal.  I'd recommend both books, although book are pretty dense and will require some time from you as a reader.

This recipe is another Pinterest find, just from searching "paleo" I found a bunch of people to follow. This recipe was posted on the Balanced Bites blog, and comes from Practical Paleo.

It is posted with a few variations - coconut flour is optional, and so is the sweet element of maple syrup or a sugar substitute.  I left both out, after a few negative experiences with coconut flour.  It has so much fiber and density that you have to use it so sparingly, and I wanted to see if I even needed it at all.  It turns out - no!

This may be my favorite lower sugar breakfast recipe yet.  The pumpkin flavor is very noticeable (after all, there aren't very many other ingredients), and the spices are lovely.  You could serve it with sugar free syrup like we did, fresh fruit and whipped cream, or if you are really more of a paleo person who consumes maple syrup, I would RUN, not walk, to the store to pick up some maple syrup to make this maple cream.

You could also make a latte version, as Maya originally did, but we don't have an espresso machine at home.  Even "just" in coffee, this is a delicious drink for fall!  It is currently fueling my NaNoWriMo writing sprees, where I am almost to 7,500 words on day three.  Phew.
at 10:01 PM No comments:

I should have posted these yesterday - Happy Halloween belated, everyone!

This recipe for Candy Corn Kaleidoscope Cookies comes from CakeSpy, who modified it from an original Betty Crocker recipe.  Betty Crocker!  I didn't change a thing.  Something about this recipe, maybe the lack of egg or the use of powdered sugar, makes the vanilla flavor really stand out.

I had no Halloween costume, but I did paint my nails to look like candy corn.  So festive!
at 9:27 PM No comments: