Cranberry Harvest Cake (or what do I do with the rest of these fresh cranberries?)

This is a take on the Almost Famous Cranberry Cake from Sarah Copeland at Edible Living. It comes from her cookbook, Every Day is Saturday, which I enjoyed cooking from earlier this year. But it's more in service of a dilemma I face every year - over purchasing fresh cranberries and needing recipes that will use them up. I know one can freeze fresh cranberries, but this is usually a better idea if one plans ahead and does so immediately after purchasing, and not as good of an idea once they've lingered in the fridge for two weeks, waiting for Thanksgiving inspiration and getting a little wrinkled. I like this cake plain, a little more cakelike than a quick bread, but close enough to just be a loaf slice.* If you want a glaze, please see Sarah's recipe. 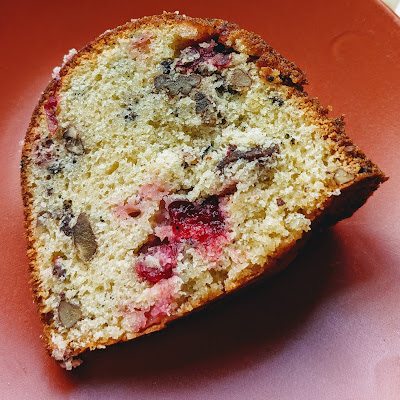 TO MAKE THE CAKE:
Preheat the oven to 350°F (180°C). Position a rack in the lower middle. Butter and flour a 10-inch, 12-cup (25-cm, 2.9-L) nonstick Bundt pan.
Beat together the butter, granulated sugar, and zest in a large bowl with an electric mixer on medium-high speed until light and fluffy, about 2 minutes. Add the eggs one at a time, beating after each until uniform. Scrape down the bottom and sides of the bowl, add the vanilla, and stir to combine.
In a separate bowl, stir together the flours, baking soda, salt, and cinnamon. Add to the butter mixture in thirds, alternating with the juices and half-and-half, and beat on low to combine, scraping the bowl after each addition. Stir in the cranberries.
Pour the batter into the prepared pan (it will come to the top of the Bundt pan) and bake on a baking sheet until a wooden skewer inserted into the center comes out with a tiny crumb, 1 hour to 1 hour 10 minutes. Transfer to a wire rack to cool for 20 minutes. Remove from the pan, and let cool completely on the rack.
*Notes from JennyBakes:
I combined the juices and half-and-half but this does curdle the dairy, don't worry about it.
I added cinnamon but you could use any combo of favored fall spices. I almost added some chopped crystallized ginger but forgot, whoops.
I looked around and added other extras from the pantry to add more texture - pecans and cocoa nibs added toasty and crunchy and a hint of chocolate to the cake.
I found the cake to be an improved texture the day after baking. This would probably be even more helped by a glaze but I can't be bothered.
Mine is pretty dark because I baked it in an ancient bundt cake pan I bought at a garage sale in Indiana for 50 cents 15 years ago, and I always forget to bake it at a lower temperature and super flour the pan, so half the top of my cake also remained in the pan. I have such a nostalgia attachment for that pan though.
at 12:00 AM No comments:

This recipe comes from Tasty Pride, edited by Jesse Szewczyk. This particular recipe comes from the founders of Coolhaus (and partners in real life), Natasha Case and Freya Estreller. I used Raaka Maple Dark for the chocolate component, and made a half recipe, and cooked it in a ceramic baking dish instead of a skillet; otherwise I followed the recipe, haha. I would say a slightly sweeter chocolate than my 75% dark would be slightly better. This is the best tasting cookie I think I've made and you will want several friends for this one, since it must be consumed right away. 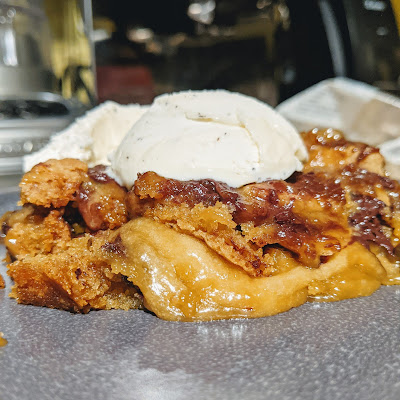 Crêpes with Roasted Bananas and Barbados Cream from Ottolenghi Flavor

This recipe was one of the options for the pancake party and recipe challenge today from Ottolenghi Flavor for the Rainy Day Bites Cookbook Club in Instagram (and the reason I'm sometimes posting on Sundays instead of Mondays.) The savory option was a pancake with two ingredients hard to find in these remote shopping times - asparagus (out of season) and gochujang (not at my regular grocery stores) so I went with the sweet version. I was pleased to find it wasn't overly sweet, actually. The cream itself is not sweetened, but the bananas are, and the combination of all the ingredients is a very balanced and delicious bite. I should have known, considering the source. 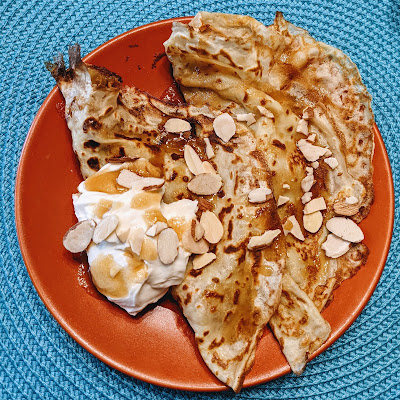 I hadn't heard of Barbados cream, but it is a mixture of mascarpone and yogurt, tangy and smooth. I didn't exactly follow the recipe for the bananas and cut a few too many corners so they weren't as carmelized as those shown in the cookbook photo, but they were fine. Next time I'd probably just carmelize them on the top of the stove. I didn't have rum so I used amaretto with the brown sugar, tasty of course. This is more of a dessert crepe but I ate it for lunch one day when I had time to make all the parts. They come together quickly. I think the best order of things is to preheat the oven, mix up the crepes, prep the bananas and get them in the oven, mix up the cream, and then you're about ready to start cooking the crepes after the wait time. I think I'd prefer the brown sugar drizzle blended with the cream so I didn't have to try as hard for a sweet bite, but I can see why it's designed that way. 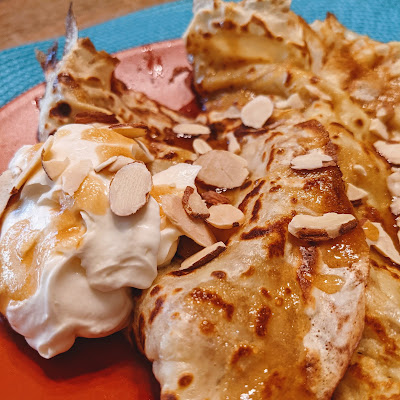 Like pancakes? I seem to make them from around the world! Check out the Khobz Al-jbab from the Arabian peninsula,  Finnish pannukakku, Icelandic pönnukökur, Papua New Guinean banana pancakes,  kauk moto from Myanmar, the Danish ebleskiver, the Hungarian palacsintas, the Kaiserschmarrn or "Emperor's Mess" from Austria, the Swedish pancakes from Alaska, and what we call the German oven apple pancake. I also made ratio pancakes from Michael Ruhlman's book, which we can call American. I've made several more American pancakes, like the recipe from Rosa Parks held by the National Archives, another variation on lemon ricotta pancakes. Pancakes can also be savory, like scallion pancakes from China (also called cong you bing.)
at 3:05 PM No comments:

We had purchased some lower-sugar dark chocolate from Raaka, and ended up on their mailing list. They send delicious sounding recipes, and this one caught my eye. Luckily I caught that they forgot to include the amount of almond flour in the recipe, so I have added it below. There is no almond flour in the pumpkin component, and it will look rather liquidy in texture before baking, but it all works out well. 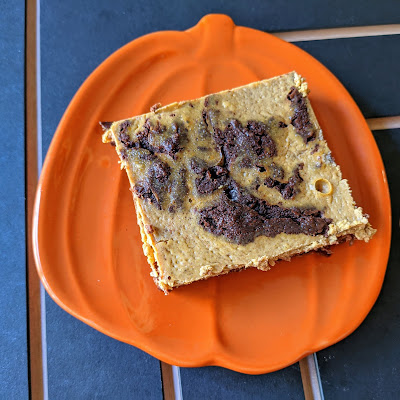 I found the end result before chilling to look rather greasy, but the chilling step really solves everything overall. I'm not convinced the recipe really needs 8 oz fat (especially the butter, which I replaced for the coconut oil) but haven't tested it to know for sure otherwise. 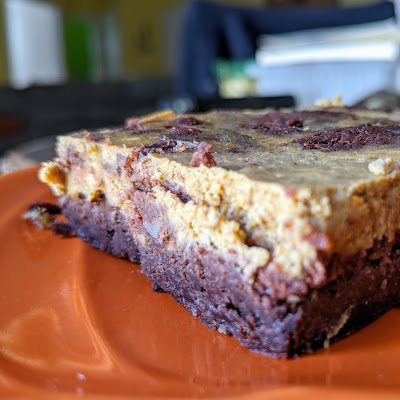 Steps:
1. Preheat the oven to 325 Fahrenheit and line a rectangular baking pan of any size with parchment paper. We recommend a 9x13” baking pan, but sizes close to that will do.

2. For the cheesecake layer: combine all the ingredients in a medium bowl. Mix with a whisk until smooth, or use a mixer if you have one.

3. For the chocolate batter layer: melt the chocolate and the coconut oil slowly in a heatproof bowl. Be careful to not overheat it. Stir and repeat until melted and fully combined. Add the coconut sugar and mix it well, then add the eggs. Whisk until combined. Once you've mixed those well, add the dry ingredients: almond flour, salt, and cocoa powder. Fold them into the chocolate using a rubber spatula.

4. Spread ¾ of the batter on the bottom of the prepared pan.

5. Spread all of the pumpkin cheesecake batter on top of the chocolate batter. Make sure the layers are even.

8. Once the brownies are baked, cool the pan at room temperature for 30 minutes. Then cover the pan with cling film and place in the refrigerator for at least 6 hours.

9. After 6 hours, these are ready to cut and serve! These will keep in the refrigerator for 7-10 days. Enjoy!

I used random dark chocolate I needed to use up, including the Raaka Maple Dark Baking Chocolate, which I'm enjoying for baking quite a bit. The discs are very thin, meaning they melt very quickly. I also had a bar of 85% dark that was too dark for our tastes to just eat.

I used butter in place of coconut and it worked out once chilled.

I didn't do swirls very well but it still tastes good in the end!

The buckwheat flour I bought last year around this time (to make double chocolate orange buckwheat cookies, yum!) is a little past due but I am stubborn and don't want to throw it out. So I went looking for buckwheat recipes. I know, Mom, this is ironic, because I was the kid who hated buckwheat pancake day. Well if you like those, these waffles are even better. I guess I grew up. I have a pumpkin buckwheat pancake recipe to try soon, or a traditional swedish buckwheat chocolate cake. We'll see. 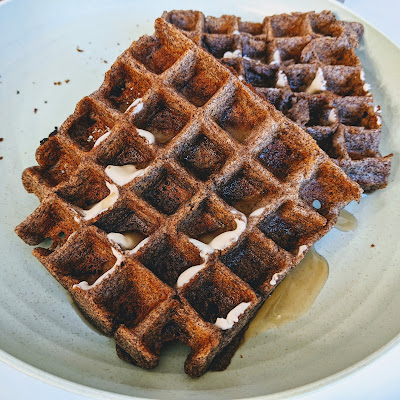