Zatar and Poppy striped Lavash Crackers
Originally uploaded by watchjennybake.
I was pleased when I saw that this month's Daring Bakers challenge was something savory, and even more pleased when it was vegan! The idea was to make the lavash cracker recipe from The Bread Baker's Apprentice and make any vegan and gluten free dip to go with it. It was optional to make the crackers themselves gluten free, but since I had bread flour in my freezer needing to be used, I went with regular for that. Thanks to Natalie of Gluten A Go Go and Shel of Musings From The Fishbowl for picking a great challenge. (You can view the recipe at Shel's blog, or pick up a copy of this cookbook for yourself. I know it is on my wishlist!

But back to the crackers. The posting date for this coincided with a international dinner night with friends, the theme of which was food from Saharan Africa. So I adapted the lavash and the dips that went with it to go along with this theme. I made the recipe for the first time last weekend, and didn't cut the crackers before baking. This meant breaking it into shards after it had cooled, and this worked okay, but I think they looked better the second time I made them, and precut them into squares or strips. The kneading also went better the second time, because I felt a specific moment when suddenly the dough felt like it was perfect, right around 8 minutes.

You can see poppy seeds, kosher salt, and a greenish spice on the crackers in various combinations. The green herb blend is za'atar, which is a mixture of thyme, sumac, sesame seeds, and salt. With its Arabic origins, I thought it was probably something that people in northern Africa would be familiar with, so it went along with my theme.

Ever since visiting my friend Abbey in Chapel Hill, NC, and seeing her amazing cupboards of gastronomic wonder, I have been wanting to try to make something with pomegranate molasses. Last weekend when I sat down and went through my stack of magazines, I found a recipe for muhammara in the July/August issue of Vegetarian Times. It called for pomegranate syrup, but I pretended it said molasses and substituted accordingly.
Muhammara is a dip made from roasted red peppers, olive oil, sauteed garlic, and toasted walnuts. It was tasty but I think next time I would use less of the pomegranate molasses and a little more garlic.

The other dip I made was Foul Mudammes, or Egyptian Fava Bean Dip. The hardest part about it, actually, was tracking down fava beans in town to make the second batch. I'm pretty sure Pita House is the only place selling them in a can, and I can always use an excuse to have to go there. From what I've read, fava beans and a bread similar to lavash is a traditional Egyptian breakfast. If this is true, I will be relocating to Egypt and continuing to blog from there. It was delicious and a perfect balance of spices and tomato and beans. I think it will become a staple in our house, pureed and lumpy.

This is the first time in a Daring Bakers challenge that I have felt that the recipe chosen would be something I would make repeatedly. I hope we see more savory challenges!!

Since I'm a music librarian in my day job, I thought I would say that today I listened to Cheb Mami - Meli Meli as I baked the crackers, and as I blogged them. Too bad I didn't have any Umm Kulthum!

Lingonberry Oatmeal Bars
Originally uploaded by watchjennybake.
I have wanted to have a home with a pantry in it for a long time, because I wanted to be like those tv cooks who walk the camera to their pantry and have all these magical ingredients inside from their travels and shopping trips. Since we bought our house, I have intentionally snagged uncommon food different places we go, and let it sit until I hit inspiration.

A weekend trip to IKEA in Atlanta a few weeks ago meant that I brought home a jar of lingonberry preserves. Yesterday morning I woke up feeling productive, and one of the things I did was to sit down and finally go through a stack of magazines that I never seem to have time for. The picnic section of July/August 2008 Vegetarian Times had this recipe for Raspberry Oatmeal Bars that included the instruction to "Feel free to try this recipe with different jams," and my brain started going through what was in my pantry. I knew I had English ginger preserves, but wasn't sure they would come through the heaviness of the bar cookie. I thought I still had something left over from one of the NC farms we visited over the summer, but then I remembered the lingonberry. Now, I had no idea what lingonberries actually tasted like, but I suspected they were slightly tart, and I love cranberries with oatmeal, and decided to give it a go.

It turns out that lingonberry preserves brought a lot of depth to this recipe. The slight tartness let the sweetness of the cookie have a flavor to play off of, and the way the berries still slightly explode in your mouth made for a fun eating experience.

In fact, worried that I was boring people with my pictures just of food, here I am taking a bite of one. They certainly didn't last long in my house.

Directions:
1. Preheat oven to 350°F. Coat 9-inch-square baking dish with cooking spray.
2. Sift together flour, cinnamon, baking soda, and salt in large bowl.
3. Cream sugar and butter until light and fluffy. Beat in egg and vanilla and almond extracts until smooth. Add flour mixture to butter mixture; mix until combined. Stir in 13/4 cups oats. Spread 2/3 of batter on bottom of prepared baking dish. Spread raspberry jam over the batter with back of spoon.
4. Add remaining 1/4 cup oats to remaining batter. Crumble over top of raspberry jam. Bake 30 minutes, or until golden. Cool, then cut into bars.

*And of course, substitute any jam or preserves here! I used less than a cup.

Cookies for Cookie Break
Originally uploaded by watchjennybake.
I will admit to plying my students with goodies, especially on days like today when I needed them to come in for a meeting on a weekend. I made two kinds of cookies for today - Fiesta del Sol Cookies and Kitchen Sink Cookies. Kitchen Sink Cookies are just what they sound like - today they had chocolate chips, butterscotch chips, oats, and coconut, but they could have had nuts, dried fruit, cereal, anything needing used up.

The second cookie is more of a unique flavor combination - cornmeal, lemon, and cinnamon - with the look and feel of a snickerdoodle. The cornmeal makes it a little crunchier. I love this cookie. I found it a few years back in the Enduring Harvests cookbook, which I highly recommend if you are looking for native americanish dishes or some new flavor combinations.

Cream together sugar and butter, then beat in the egg and vanilla. Mix in remaining ingredients. Blend together well. Cover and chill 2-3 hours or until firm.

Preheat oven to 350 F. Shape cookie dough into small balls, about 1/2" in diameter, and roll in the cinnamon-lemon sugar.

Jenny's notes: I might recommend doubling this recipe, but because each cookie is pretty small, it makes more than you might think. Any time a recipe includes zest of a citrus, I like to mix it with the sugar in the recipe before creaming it with the butter. I think it makes the cookie more fragrant.

I have great student workers! Happy 2008! 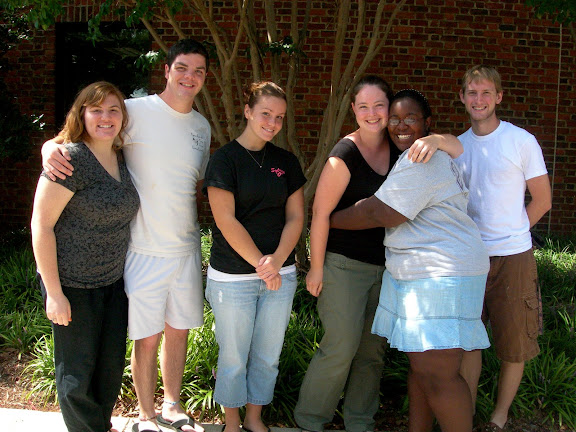