I thought I was done with this cookbook (Season by Nik Sharma) but every time I see someone in the Rainy Day Bites Cookbook Club (in Instagram) try another recipe from it, I am drawn back in to the other recipes I've marked. I baked the sweet potatoes for this before realizing I didn't have coconut milk, so this recipe was made over the period of a week. See beneath the recipe for a link to the cookbook as well as how I simplified the recipe process.

This is a take on a traditional Goan custard, but I found it to be more firm than I was expecting. To me the firmness was an asset. It makes it easier to cut, serve, store, and more. The flavor is divine. If any people actually gather for Thanksgiving, I volunteer to bring this! It's the flavors of a sweet potato dessert but easier than pie, and I think I like it better than pie texture. It could be dressed up with whipped cream and nuts or something but I don't think it needs it. 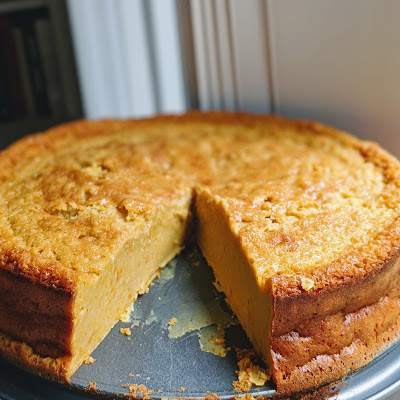 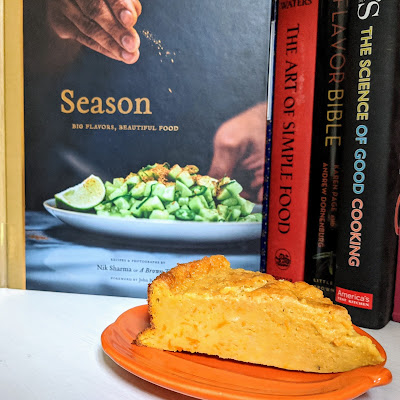 (recipe is from Season by Nik Sharma but I'm taking this from the New York Times, which you should visit for more contextual info and a picture of a greater smooth texture than I achieved)

I have no idea why the directions don't use a springform pan - half the steps described are unnecessary if you just use a springform pan. I guess there's a little bit of a ledge that forms on the bottom outside, but it's so much simpler! That's the only change I made. (This is also true about his chai masala apple cake which I made the day I'm writing this post - made the same change for that one, and it didn't sag on the edge at all.
I used brown sugar, just light, because that's what I have. I did some looking for jaggery and decided I didn't need to buy it when it wasn't required.
The recipe says to just use a whisk but my sweet potato was still pretty chunky and didn't completely incorporate, which you can really see in the second picture. This had little effect on end result or flavor but the full blend of the cookbook picture and the NYT photo does look slightly more impressive. Next time I'd either run the mixture through the food processor (not the blender or mixer as I don't think it would be wise to introduce more air into it necessarily) or better puree the sweet potato. I bet if you take it directly from the oven and it hadn't been in the fridge a few days, this may not be a problem.
THIS IS SO GOOD; MAKE IT TODAY.
at 12:00 AM 1 comment: 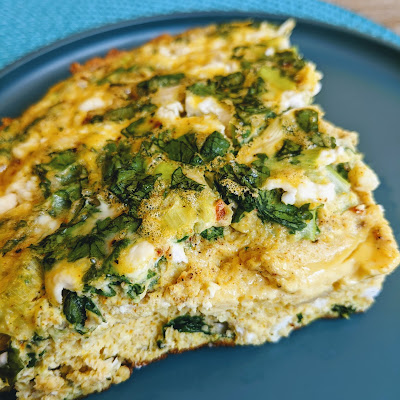 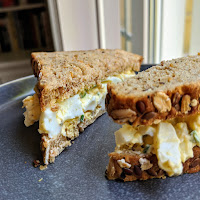 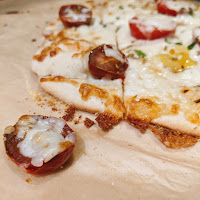 I invited myself along to the Rainy Day Bites Cookbook Club in Instagram and the August cookbook is Season by Nik Sharma. The recipes are Indian with some traditional elements and some spins on traditional recipes. The default is always from scratch and as fresh as possible, from roasting and grinding your own spices to making your own naan. That's what I did for this recipe, a week late or so, but I finally did it! I'll include the naan recipe but not the full pizza recipe; please see the cookbook for that! 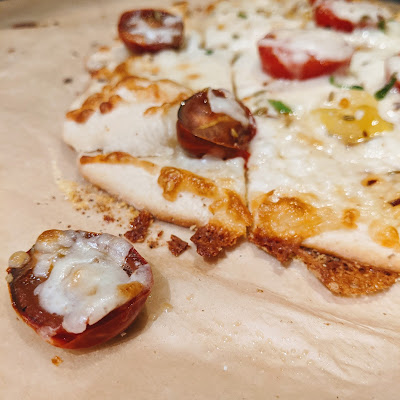 I never feel quite comfortable with pizza. My stove isn't gas, I don't have a pizza stone, and I can't get quite to the crispness I would like. However I thought the end result was tasty flavor-wise. I ended up just making the two pizzas from the dough rather than making half into garlic naan, which was my original inclination.

Naan
(from Season, with far more directions and narrative and photos)

Using a fork, whisk the milk, egg, yogurt, butter, and salt in a small bowl. Sprinkle with the yeast and let it sit for 5 minutes. The mixture should be bubbly on the surface.

Put the flour in a large bowl or mound on a clean work surface and make a well in the center. Pour the yeast mixture into the middle of the well.* Using clean hands or a large wooden spoon, gradually mix the flour from the inside wall of the well into the liquid to form a sticky dough. Knead well for 4-5 minutes.

Fold the dough by grabbing it from the underside and stretching it and folding it back over itself. Rotate a quarter of a turn and repeat three or four times. Brush a large bowl with a little oil and put the dough in the bowl. Cover with plastic wrap and allow to rise in a dark, warm place until doubled in size, about 4 hours.

Divide the dough into four equal parts and shape into balls. On a clean, lightly floured work surface, use a rolling pin to roll out the balls of dough, one at a time, into circles about 1/8 in (4 mm) thick and about 6 in (15 cm) in diameter.

To cook the naan, heat a large skillet with a lid over medium-high heat. Slap a circle of dough into the hot skillet and cover the pan to trap the steam. Cook for 3-4 minutes, flip the dough, and turn the ehat to low. Cook, covered, until the naan blisters, with a few big bubbles, 1 to 2 minutes. Remove from the pan and wrap in a clean kitchen towel. Repeat with the remaining three circles of dough.

*If you are an amateur bread or pasta maker, this well concept might not be as easy as it sounds. I had a break in my wall and ended up with less of the flour and less of the yeast mixture than I started with. What a mess! I wish I'd used a bowl.

I'm always on the hunt for the best blueberry muffin recipe that fits with the way we eat. I found one on King Arthur Flour that only used coconut flour, which was great because for a few weeks there I couldn't buy all-purpose flour or almond flour.

Thank goodness for companies like King Arthur Flour and Bob's Red Mill who make all these great alternative flours and then provide recipes as well. Coconut flour is really tricky and has to be handled differently. These were rather moist, but I may have been exuberant with my blueberry measuring. I usually have the opposite problem with coconut flour as it absorbs a considerable amount of liquid. I'd like to try this same base recipe again with chocolate chips or nuts. 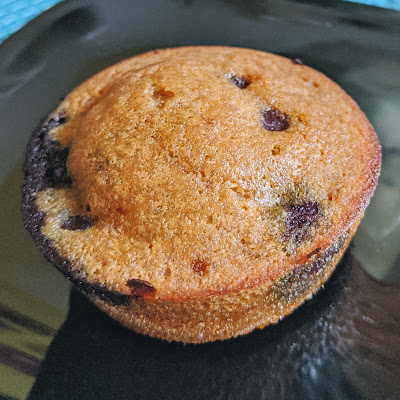 Directions:
*I did not use any almond extract, and subbed coconut sugar for the honey (and still they were very moist.) 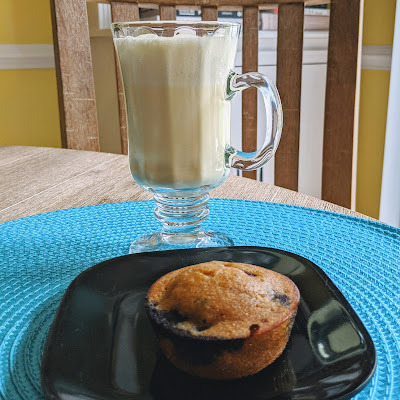 The day I made these, it was an impulse Second Breakfast kind of bake. I had been looking through a cookbook I had for review called Good Drinks: Alcohol-Free Recipes for When You're Not Drinking for Whatever Reason by Julia Bainbridge. It comes out from Ten Speed Press on October 6, 2020. This adult version (but not too adult, as there is no alcohol, obviously) of an Orange Julius was easy and delicious - I actually left out the simple syrup so it just contained the sweetness of the orange juice and that was good enough!
at 12:00 AM No comments:

I found this recipe when I went looking for blueberry recipes, and I was so intrigued by the technique in Ashley's Blueberry and Goat Cheese Hand Pies that I could not let it go, and made a version of them not long after. I didn't have any goat cheese on hand so went more in the direction of cooking down the blueberries a bit and adding cinnamon and coconut sugar.  But these really do crisp up and this technique would work well for all sorts of fillings. They are definitely best the day they are made. I've made little pie pasties before with pie crust and this technique is completely different from that. It might be helpful to watch her video with the peach version to see how she does it. It really does work. 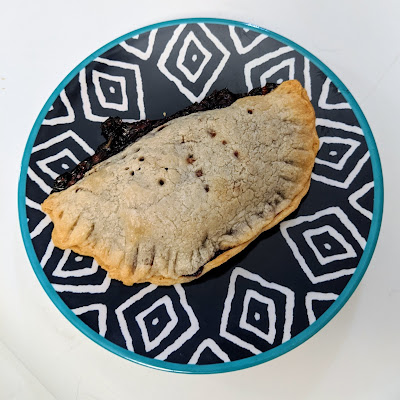