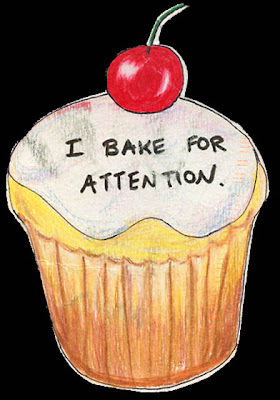 I read Post Secret every Sunday, and while I did not submit this postcard, it made me smile.

For a long time I have had my baking blog posts update automatically to my Facebook page, but because of the way Facebook often doesn't work, sometimes my wall would get inundated with posts all at once. And since I don't post much to my wall it would look like all I did was bake and read!

My solution was to create a separate Facebook page for JennyBakes. If you're more likely to check Facebook before your blog reader, feel free to add me there!
at 12:31 PM No comments:

Banoffee Parfait
Originally uploaded by watchjennybake.
After making alfajores this past week, I had some unfilled cookies and some dulce de leche left over. I knew this was exactly what I needed for banoffee pie, so I whipped up some cream and sliced some bananas and layered them with the two leftover ingredients.

To be honest, it was way too sweet for me, but the first bite was delicious.
at 8:56 PM No comments:

With some of the cookies, I tried jam in the middle. If anyone has a magic formula for sandwich cookies, I'd love to hear it. When they are this substantial they are impossible to eat without everything oozing everywhere!
at 11:42 PM 5 comments:

Racines Cake
Originally uploaded by watchjennybake.
When we were in Black Mountain, NC, last weekend, we stopped in at Chocolate Gems, a local artisan shop with high quality chocolates. They use mostly Belgian chocolate but had a few truffles and a few other items from Black Mountain Chocolate, where a man does hand-crafted chocolate, single-origin. So at the shop they had some cocoa nibs for sale in little bags, and I remembered a recipe I had seen in Ready for Dessert by David Lebovitz.

I made the cake, which while it has quite a backstory, is really just your typical flourless chocolate cake, and topped it with the cocoa nibs as urged in the recipe.

I'm not sure what to think. I found the cocoa nibs a little.... strange. Maybe they were not finely chopped enough. But it was a little like munching on cake topped with chocolate flavored tree bark. Nothing like on the movie Chocolat where Vianne gives a woman cocoa nibs to improve her marriage and it sounds so delicious and romantic (but now I think owwww).

Still, it is more interesting to make a cake with a story. Between David Lebovitz's story of finding the recipe on the mens' restroom wall at a Parisian restaurant, and my story of using local artisan chocolate, maybe you'll want to try it too. The recipe is actually freely available on Lebovitz's blog, although his cookbook is getting a lot of hype, so you might as well pick it up. I still haven't had a perfect culinary experience from it, but I shall keep trying.
at 10:15 PM 2 comments:

Thai Iced Tea Cookies
Originally uploaded by watchjennybake.
I love Thai iced tea. Well, I love iced coffee from that region more, but the iced tea with its orangey color has a special spot in my heart. Sometimes we buy the Tessa Thai Tea powder, which I can't find anywhere online to link to. It could be that David Rio, the tea company that used to make it, isn't doing so anymore. That would be a shame, it was an easy guilty pleasure.

On the side of the box was a recipe for Thai Tea Cookies. I couldn't get it out of my head so I whipped up a quick batch yesterday. They are chewy and sugary but full of flavor, and my student workers devoured them. If you don't like coconut, you won't like these. And vice versa. :)

My simplified instructions:
Cream butter with sugar and tea powder. Beat in egg. Lightly mix in dry ingredients and stir in coconut. Chill dough for 30 minutes. Bake at 300 F for 10-12 minutes (I baked mine for 14). Let cool for 5 minutes before removing from cookie sheet.
at 9:27 PM 5 comments: