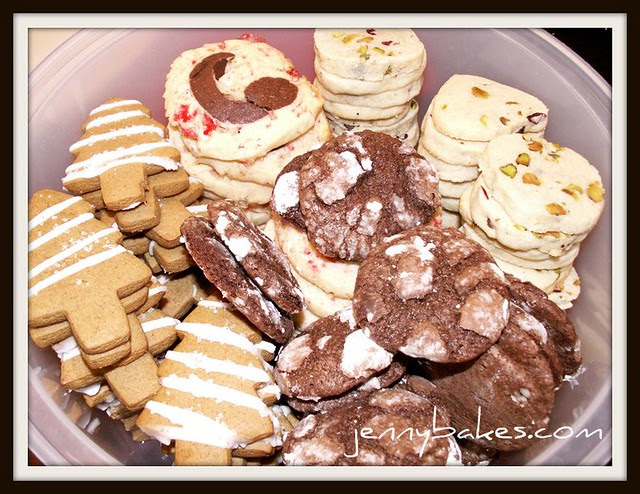 It turns out that I got so excited about my gingerbread trees with lemon icing, I forgot to talk about the other cookies I made for the holidays!

I made a new kind of swirl cookie, trying to top last year's orange-nutella pinwheels. I instead made Alton Brown's Chocolate Peppermint Swirl Cookies, but they weren't quite as good. The peppermint candies get too hot in the cookie and the carmelized sugar can overbake the cookie itself.

The chocolate crinkle cookies, or what my family always called "wagon wheel cookies," is just a recipe I make every year.  I absolutely can't celebrate December without them.

The best cookie, pictured up in the right corner, almost bland looking, may have been the best one!  Since it is a tweak on a Martha Stewart recipe, I'm including it here for your baking pleasure.

Whisk together flour, baking powder, and salt in a large bowl. Beat butter and granulated sugar with a mixer on medium-high speed until pale and fluffy. Beat in egg and vanilla. Reduce speed to low. Add flour mixture, and beat until combined. Stir in pistachios and cranberries.  Divide dough in half.  Form each half into a log, either a round or triangular shape.  Chill several hours.  Slice dough crosswise slightly thicker than 1/8 inch. Reshape if needed. Bake at 350 degrees on parchment-lined baking sheets until firm, 12 to 14 minutes.  DO NOT OVERBAKE!  The color will not change drastically when they are done.

Okay, wait, come back.  Just for a bit.  Let's talk about what I did accomplish, what I've learned, and what tasty treats I've unleashed onto the world in 2011.  (That's more like it!)

Favorites of 2011
I went with a top 5.  I couldn't exclude any of these recipes, all of which were made for the first time in 2011.  These are JennyBakes approved, five-star, guaranteed recipes.  Each numbered item links directly to the recipe, so click away!

1. Gramercy Tavern's Gingerbread
I realize I just posted about this, but it was seriously good.  This is why holiday baking posts are so difficult; I find something we love that I have to make again, and I run out of space to make new desserts.  Add this one to the repeat pile!

2. Pumpkin Cinnamon Roll Pancakes
These were amazing and quite a visual treat, but the real reason they were on this list is that I started hearing about them at work.  One student said a professor talked about them in class, and another professor came into my office to thank me for the recipe.  (Hi friends!)  You know pancakes are good when they get brought up in music theory class!

3. Pistachio Cranberry Icebox Cookies
Ha!  When I first started this blog post, I realized I never ever blogged these, which explains why you see an early 12/31 post for Christmas cookies.  This was another recipe that I heard about for days after I brought them to work.  There were theories that I used fancy butter (nope, I always buy the cheap generic stuff!), and when I shared the recipe I got weird reactions like "I'll never be able to make them like you."  People.  Don't be afraid of baking.  They are just sugar cookies with stuff in them.

4. Red Wine Chocolate Cake
The second recipe in my top five from the Smitten Kitchen blog (seriously excited to own her cookbook when it comes out!), and another cake with rave reviews.  In fact, this might be my personal favorite of the list.  I loved the way the red wine elevated the chocolate, and the texture of this cake was also fantastic.

5. Rosemary Shortbread
I first tasted this at a work function (we have a lot of people who love to cook!), and I hearby apologize to shortbread for thinking I didn't like it.  This recipe proves me wrong.  I can still taste it ....

Oh how I've learned!
I may not have learned about fondant like I'd planned, but I did get a chance to meet a local chocolate maker and play with his chocolate in recipes.  That was a highlight of the year!  I also did a lot more alternative baking - vegan, gluten-free, and trying to make things set up with agar-agar.  I hope I can keep challenging myself to be more adept at those kinds of recipes, since there seem to be an increasing number of people who identify with those dietary choices. 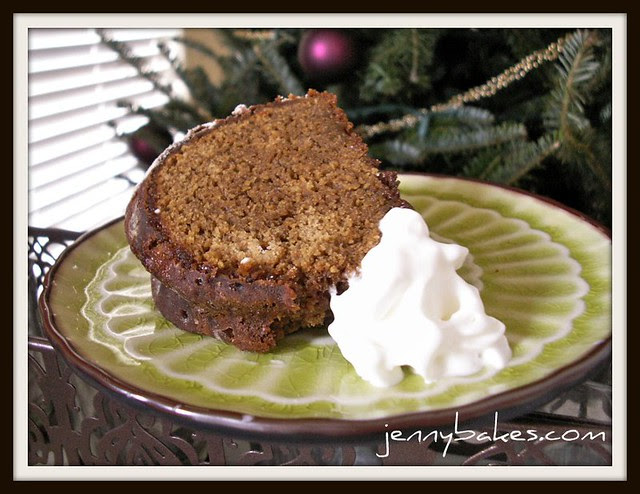 Half of the recipes I mark to make later are from Smitten Kitchen, but I can't help it, that blog is amazing!

You can find the recipe to Gramercy Tavern's Gingerbread on the Smitten Kitchen blog, but I have a few things to say about it. 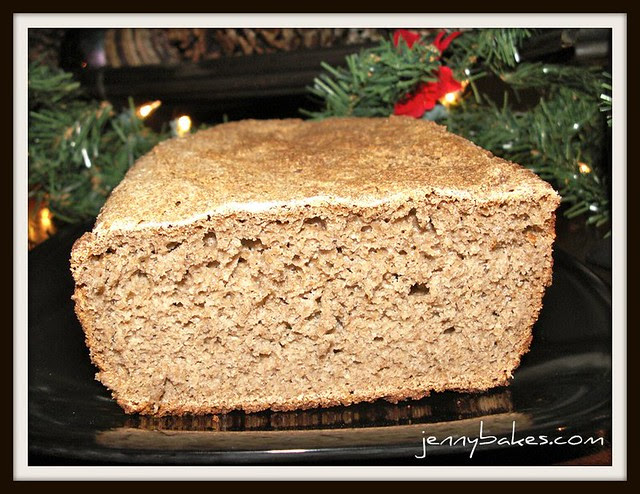 Our Daring Bakers Host for December 2011 was Jessica of My Recipe Project and she showed us how fun it is to create Sour Dough bread in our own kitchens! She provided us with Sour Dough recipes from Bread Matters by Andrew Whitley as well as delicious recipes to use our Sour Dough bread in from Tonia George’s Things on Toast and Canteen’s Great British Food!

This was my first foray into sourdough bread making, and unlike most Daring Bakers months, I knew I could not procrastinate and make something the last day.  I actually began the starter, affectionately named Gertie, on the 16th or so.  I could post a picture of her here, but she is very sensitive to how she looks.  Just picture a gloppy, bubbly, tan mass, and there you go.  (Sorry, Gertie).  If I had been a better sourdough starter mother, I would have remembered to feed her after I baked her first loaf, but I failed.  It is just as well; this bread wasn't my favorite ever, but it is more of a taste thing.  I'm pretty sure the result is what I was looking for.  You can find the recipe on Jessica's blog, where there are also recipes for country wheat sourdough, and an interesting looking gluten-free variety with brown rice flour.

The second part of the challenge was to make something to put on a toast version of our bread.  With the cold weather and lots of time spent indoors during the holidays, Nathaniel and I had been craving Welsh Rarebit anyway, so even though I didn't challenge myself on that part, it was still delicious!  The dark, smoky, murky flavors of the Welsh Rarebit, created by the Worcestershire and ale, is a perfect pairing with a sourdough like this. 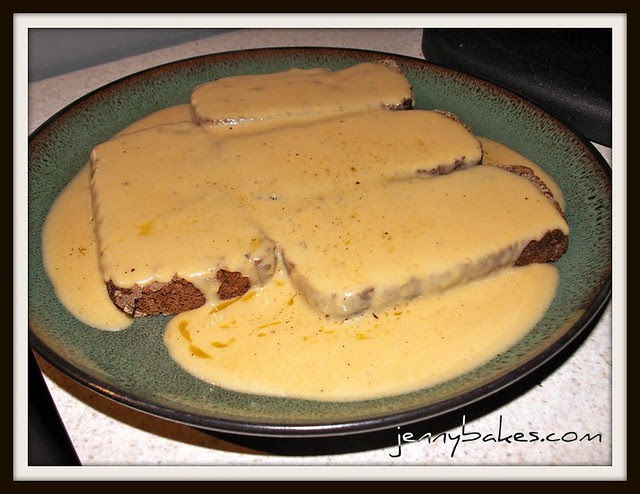 I use Alton Brown's recipe, kind of. I was horrified at the idea of using cream instead of milk, when almost every recipe you'll find uses milk. There is already so much fat with the cheese and butter, that I just couldn't do it. With the milk, this recipe is quite rich, so I just can't imagine it any richer.  He also only called for 4 slices of toast, but this easily smothered 8 thick slices of the rye sourdough.

Directions:
In a medium saucepan over low heat, melt the butter and whisk in the flour. Cook, whisking constantly for 2 to 3 minutes, being careful not to brown the flour. Whisk in mustard, Worcestershire sauce, salt, and pepper until smooth. Add beer and whisk to combine. Pour in milk and whisk until well combined and smooth. Gradually add cheese, stirring constantly, until cheese melts and sauce is smooth; this will take 4 to 5 minutes. Add hot sauce. Pour over toast and serve immediately.

Whatever holiday you celebrate, or if you simply enjoy your time with family, I hope you have a wonderful time!  Best wishes for 2012....
at 8:00 AM No comments: 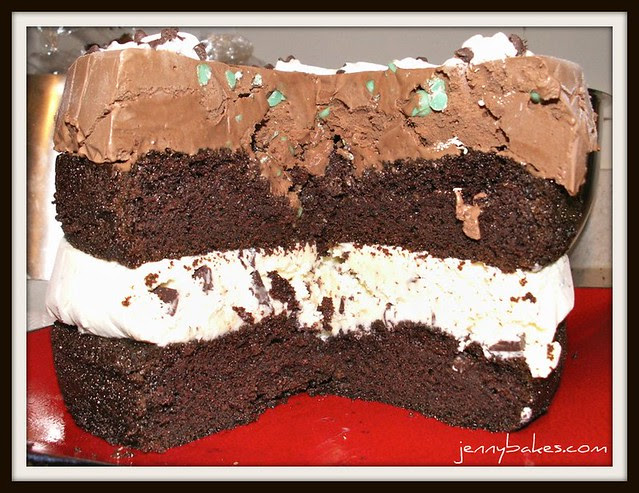 Every Christmas Eve, we celebrate a birthday. Not Jesus! Nathaniel! His old standard used to be the mint chocolate chip roulade cake from Baskin Robbins, but as there aren't any left around these parts, and he is married to someone who likes to bake, I have done some experimenting the last few years.

This year he asked if I could also make the ice cream part. Usually I wimp out and buy good ice cream from the store - Ben & Jerry's, Haagen Daaz, whatever I know is good. After all, I've not had the best luck in ice cream making. Too icey, too eggy, too solid, not enough flavor, and so on. I was thinking back to the one time I was happy with what I made - the hazelnut gelato from the Ciao Bella book. I decided to make two kinds of gelato, and stack this cake high. One is the typical mint chocolate chip, and one is the reverse of that.

I started with the plain base and the chocolate base in the Ciao Bella book. After they had chilled, I stirred in 1 tbsp creme de menthe and 1/2 tsp peppermint extract into each (this sounds like a lot, and was a lot more than the recipe called for, but honestly I wouldn't have wanted any less!). When the ice cream maker started sounding like it was working hard, I dumped in whichever bits I was adding (chopped semisweet chocolate or mint chips). Then I put the mixtures into the same cake pans I'd baked the cakes in, to make it easy to put together.

This was delicious! It looks a bit unfinished, because I didn't ice it at all, but taste-wise it didn't need it. I used the Black Magic Cake recipe I found randomly online, and it was great. 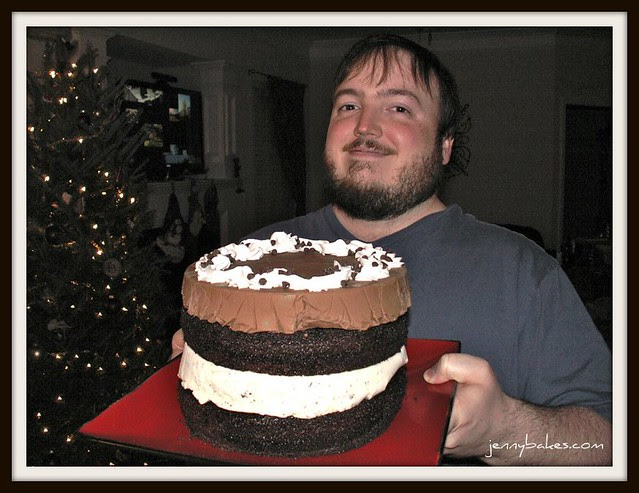 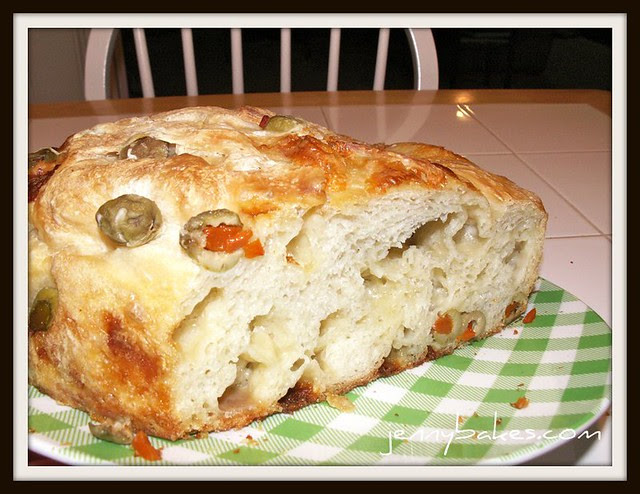 I have tried making no-knead bread before, but was unhappy with the overly crusty nature of it. I've taken to watching Martha Bakes, despite the feeling that she could have been more original with her name. I mean, come on Martha. JennyBakes? Barbara Bakes? We've all been around, baking, longer than you. But anyway.

She had a bread episode where she made this marvelous looking green olive and gruyere no-knead bread, elegantly referred to on her website as "Olive and Cheese Loaf." It is DELICIOUS. A little salty. If I make this again I might rinse the olives more. It worked great, although I baked it in a springform, lacking a dutch oven pan I could put in the oven. Why can't it just go in a bread pan? I'm not sure....
at 8:51 PM 1 comment: 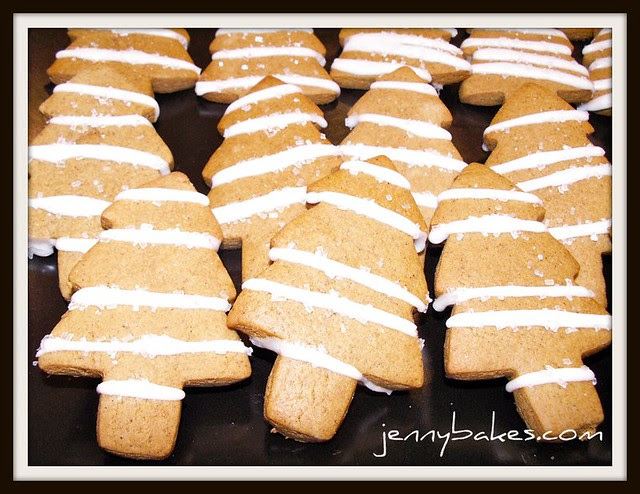 If you've never had gingerbread and lemon together, you are missing out.  I love fresh gingerbread with lemon curd, and I wanted to try the combination in a cookie for the holidays.  I had seen a gingerbread tree cookie recipe on Martha Stewart's website, where she had these elegant lines of lemon icing with the clear sanding sugar, so I copied the idea!

I used Bakerella's gingerbread cookie recipe, because I originally planned to make the cute snowman heads.  I deemed them too time-intensive, this time around.  (They are SO CUTE though, please click on snowman heads to check them out!).

Since Martha gave me the idea, I used her lemon icing recipe.  These were a big hit! Definitely the best cookie recipe of the 2011 season.
at 10:46 PM No comments: 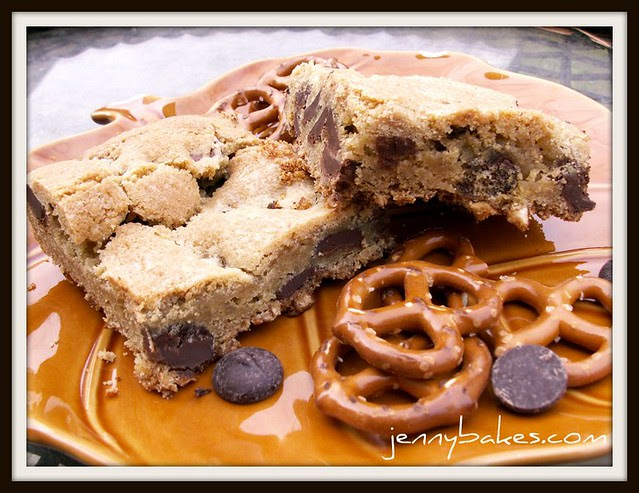 I blame the internet, again, for forcing me to make cookies when we already had Thanksgiving dessert laying around. And just like half the time, it was the couple at Two Peas and Their Pod who were to blame! Check out the recipe for Chocolate Chip Cookie Bars with a Salty Pretzel Crust that they posted over on TastyKitchen.com. They are salty, sweet, and chocolatey - a perfect treat.
at 10:40 PM No comments: