It's Girl Scout Cookie time! This year the Girl Scouts are offering a gluten-free cookie for the first time, but at least my local scouts ran out of boxes. They still haven't really attempted a low-carb cookie, and might never. Never fear, there are recipes out there to try for people not consuming grain or sugar. I used a recipe from "All Day I Dream About Food" and adapted it slightly. You can see her original version here. My most significant change is not using a sugar substitute, but a lower-GI sugar. This is because of the tastes in my household! 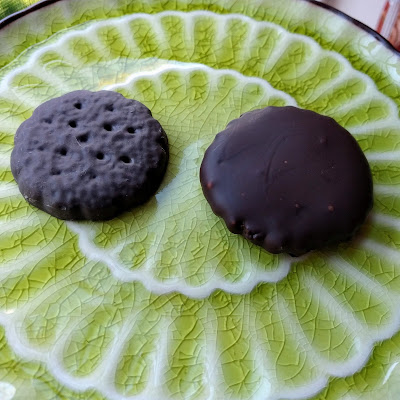 Did I still buy a box of thin mints? Well yes. That is what you see on the left. My cookie is on the right. Pretty close! Without commercial chocolate drenching equipment it's not easy to get the glaze as thin as they get it, but who ever asked for less chocolate? 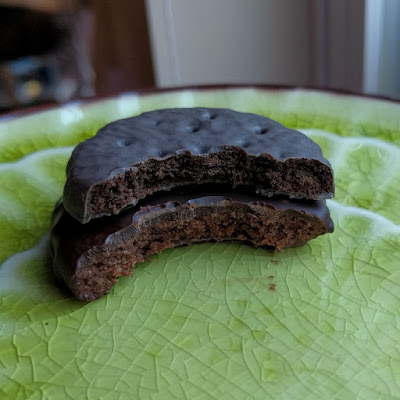 Here the two cookies are again, my version is on the bottom. You can see the almond flour makes a slightly larger grain, plus I did not bake these until crisp. There is less of a snap when you bite into it, but the chocolate still helps with that. Texture wise, I actually prefer my cookie!

When I made these I actually made a half batch, because this makes a lot! Especially when you consider that you are going to have to dip each one in chocolate, 40 is a lot of cookies. The full recipe is displayed below.

Thin Mint Cookies
(adapted from All Day I Dream About Food)

* As this recipe is, these are not at all a sweet cookie. I had missed that the original recipe had both powdered and liquid stevia. So there is room here for up to double this amount of coconut sugar.
** I know this does not seem like a lot but peppermint extract is very powerful in small doses and you do not want more than this. It will start to taste like medicine.
at 12:00 AM No comments:

Because I worked the Sunday shift last weekend, I stayed home on Tuesday, February 14, aka Valentines Day! I made myself a very Valentines-themed breakfast, one I wish I'd shared prior to the day since now it seems the wrong season. But I liked the (regular carby) scones so much that I made a low-sugar version this weekend. I thought I'd share both recipes.

The original breakfast, alongside Adagio's Ripe for Romance tea, which I actually bought last year (not a paid advertisement.) 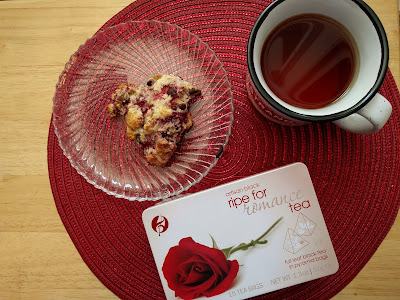 I had leftover regular-sized semi-sweet chocolate chips so that's what I used in place of the chocolate from this original recipe. I also made a half-batch, which worked out pretty well although of course the moisture from the raspberries can be problematic. Perhaps make that amount a bit more scant, or use dried berries. 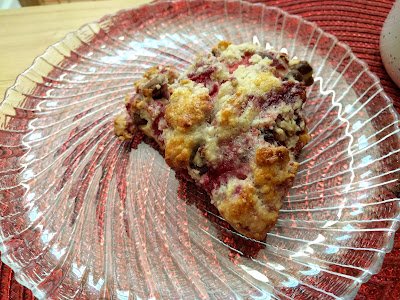 Directions
Preheat oven to 425 degrees and line a baking sheet with parchment or a silicone baking mat.
In a large bowl, whisk together the flour, baking powder, and sugar. Add the chopped cold butter and rub with your fingers into the flour until the bits of butter are roughly the size of peas. Stir in the chocolate chips/chunks.

Separate the egg; reserve the white for later use (you’ll use it to brush on the tops of the scones before baking.) In a separate bowl or liquid measuring cup, whisk together the cream, egg yolk, and vanilla extract.

Add the chopped frozen raspberries to the flour mixture. Pour in the cream, and using light, quick strokes, stir with a fork until just moistened (there may still be some flour on the bottom of the bowl.) Use your hands to gather the dough into a ball and knead it lightly a few times, just to gather it together. Don’t worry if there’s still a little flour remaining on the bottom of the bowl.

Turn the dough out onto a lightly floured work surface and divide into two balls. Gently flatten each ball into a 1-inch high disk, and cut each disk into 6 wedges (for 12 scones total.) Place on baking sheet and brush the tops with the reserved egg white; sprinkle with sugar.

Bake for about 12-15 minutes or until the tops are golden brown and scones are cooked through. 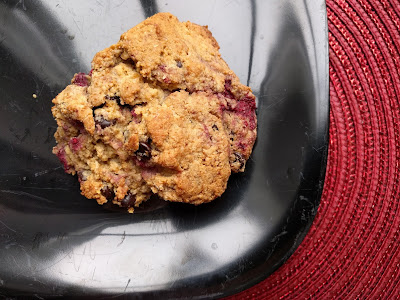 The lower-sugar gluten-free version is just a take one of my original low-sugar berry scone recipes from October 2015,  except I've started adding 1/2 cup tapioca flour (for a more tender texture). I used 1 cup frozen raspberries and added 1/2 cup mini stevia-sweetened chocolate chips. Those suckers are $8 a bag but if you only use 1/2 cup at most at a time, they can last a bit longer.
at 12:00 AM No comments:

A week ago, a co-worker emailed me with the subject line "government cookies." Apparently someone from GODORT went through and made a list of all the recipes they could find in the documents stored in the National Archives, and named their research guide, "Government Cookies." Many of them are historical, or serve a purpose like feeding 500 army men a peanut butter cookie for dessert. On the "molasses, honey, and other sweets" tab, I found the recipe for Joe Froggers, and I had all the ingredients. I didn't have plans for baked goods for Valentines Day, so the heart-shaped Joe Frogger was born!

The recipe links to the town of Marblehead, Massachusetts, which is the home of the Joe Frogger recipe. The Smithsonian dove deeper into the background of the cookie and posted it on their blog.

The rest of this information comes from the posted recipe, and I'm reposting it since most of the time USA government documents are considered in the public domain.

A Joe Frogger is a ginger cookie that dates back to Colonial times. Joe Froggers have been cherished by generations of residents of Marblehead, Massachusetts. The cookies were originally baked by a man known as Old Black Joe Brown and an Aunt Crese, who maintained a tavern on Gingerbread Hill. Because the cookies would keep for long periods of time, fishermen would take barrels of Joe Froggers along with them on their journeys. 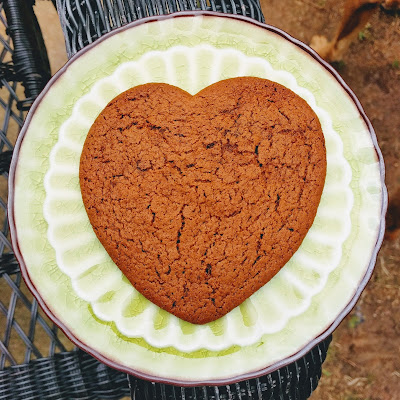 Mix flour, salt, ginger, baking soda, cloves, nutmeg and allspice in a medium bowl. In a large bowl, beat together the molasses, shortening and brown sugar. Combine the hot water and rum.

Add the dry ingredients and the water/rum mixture alternately to the sugar/molasses mixture. (If the dough is dry, add a tablespoon or two of water.) Roll out the dough between two sheets of waxed paper until ¼ inch thick. Refrigerate at least two hours.

Preheat oven to 375 degrees F. Grease two baking sheets. Cut the dough into 3-inch cookies with a cookie cutter. (The original Joe Froggers were much larger. For the traditional size, use a coffee can.) Place on greased cookie sheets and bake for 10 – 12 minutes. (Longer for the traditional size.)

The cookies are baked when they are dark around the edges and firm in the centers. Set the cookie sheets on a rack to cool for five minutes. Remove to a rack to cool completely

A friend posted this recipe to Facebook the other day, with a sentiment along the lines of, "when times get hard, we need something sweet!" I have a few novels and memoirs by Palestinian writers that I'm planning to read soon, so the baked good fits in with my reading goals, just the way I like it! 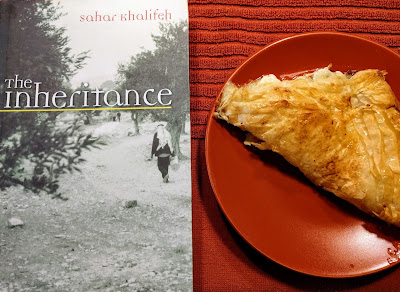 I will link to the recipe I used, but you have to be a Facebook user to access it. Warbat is like a lot of Middle Eastern desserts, where every person making it seems to use a slightly different recipe and method. Some have a milk custard inside, some have pistachios and some don't, some fold the phyllo up like spanikopita (which would have helped keep the filling out), some (like me!) use orange blossom water instead of rose water, and so on. I watched quite a few videos on YouTube and it looks like most people making warbat are making four small triangles with the filling pointing into the center of a larger square; mine were quite large in comparison, a quarter of a phyllo sheet size.

Warbat also shares a very similar ingredient list to kunefe, a recipe which I've had associated with Turkish cooking lessons but never made any at home. Both recipes use an unsalted soft cheese. I was lucky to find the right kind at the Pita House in town, but you could substitute a unsalted white cheese from Mexico or Italy, or even try ricotta. I highly recommend the orange blossom over rose water, as far as my personal tastes go.

Warbat
(recipe transcribed from POP Palestine Cuisine in Facebook, with some alterations and additions)

Over medium-high heat, stir together sugar and water. Heat until sugar dissolves and mixture is agitated or has started to boil. Add squeeze of lemon juice and orange blossom water, and allow to boil another 5 minutes, until mixture is clear and slightly thickened. Set aside to cool.

Preheat oven to 400 F. Line a pan with parchment paper, but use one with some type of edge in case the cheese squeezes out and the butter smokes on the bottom, which is what happened to me.

Lay one sheet of phyllo on a cutting board and brush with butter. Repeat with four more sheets. Cut into squares, depending on the size of the phyllo you will have 4 or 6. Sprinkle sugar over the cheese and mix. Mound cheese into the center of the square, and fold over, pressing the buttery parts together. Place on pan and brush with butter on the outside.

Bake 40 minutes or until browned. Pour or brush syrup over, and sprinkle with ground pistachios if desired.