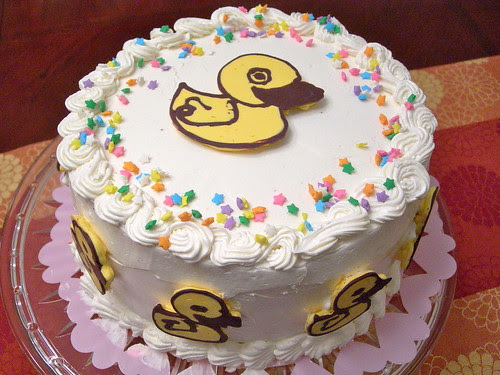 One of my co-workers is having her first child, and I was asked if I could make a cake for the work shower. I had been wanting to play more with the chocolate work that I tried earlier from The Whimsical Bakehouse so I decided to make little ducks and frogs to go with her colors of yellow and green. 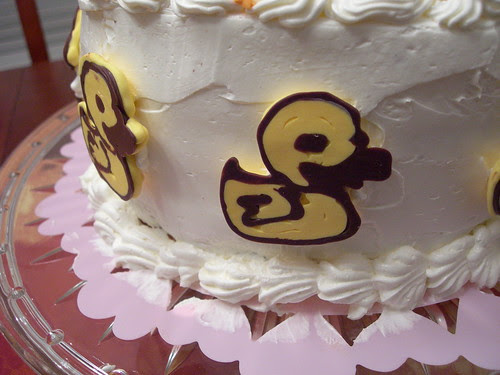 For the cake itself, I went with Dorie Greenspan's Perfect Party Cake, which truly is the perfect party cake. I've never made it exactly as written - there was "Da Lime in Da Coconut" version made for a Daring Bakers challenge, and the Peanut Butter and Jelly version from my birthday last summer. This time around I used the basic cake recipe, but omitted the coconut from the assembly stage, and used lemon curd instead of raspberry jam. So it was definitely lemony but still delicate, and the color accompaniment was nice. Unfortunately it was gobbled up so I don't have any pictures of the inside! 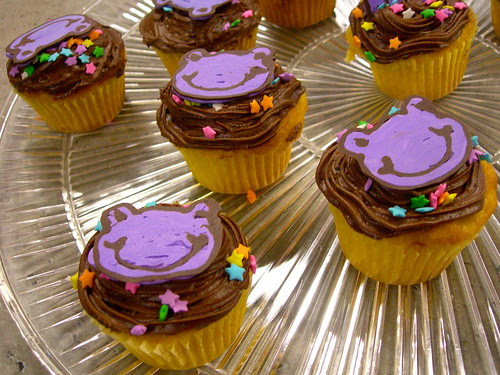 I mentioned I had planned frogs so I could do yellow and green, but I didn't have any chocolate-friendly coloring in green. So I made purple frogs instead. I used my go-to yellow birthday cake recipe for the cupcakes, which I don't think I've ever blogged! I might as well include it here. It uses a cake mix as the base (shh, don't tell) but is so tender and delicious! I think both the cake and frosting come from The Cake Mix Doctor which I used all the time when I worked at a tearoom where we had to come up with new ideas a lot. I don't own a copy myself, but have used this recipe for years! All I have written down is the ingredients, no instructions, but just use the usual cake instructions (350 F, the usual range for cupcakes vs. layers, and mix everything together for frosting.... haha, amazing what those of us who bake all the time take for granted!). 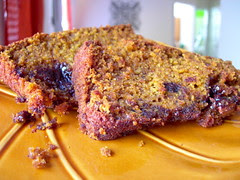 Pumpkin Nutella Bread
Originally uploaded by watchjennybake.
We keep getting hints of fall and I had bookmarked this recipe from Two Peas and Their Pod to make once I had Nutella and pumpkin in my pantry at the same time. I couldn't get the recipe out of my head, so that didn't take long.

It tasted really good, but all my Nutella clumped at the bottom when cooking. I did make it all in one loaf unlike their mini loaves, and that might have provided more stability for the chocolate!
at 12:40 PM 1 comment: 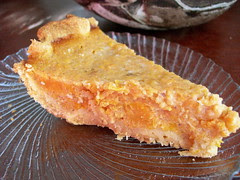 Sweet Potato Pie
Originally uploaded by watchjennybake.
This may seem a bit out of season, but I used rosemary from my garden, so that ties it into summer.

The recipe is from Southern Living. The crust is all-butter, requiring some extra chilling steps, but has a nice crunch to it with the cornmeal inside.

This wasn't really my thing. I probably wouldn't make it again, but at least I can say I have made this southern staple at least once!
at 7:48 PM No comments: 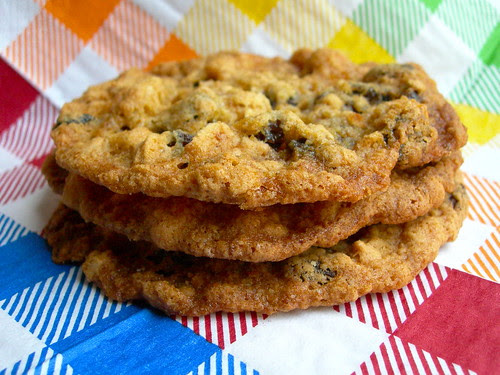 A while back, we had eBook Boot Camp in the library, and I needed an appropriate snack. What do you have for boot camp other than G.O.R.P. (Good Old Raisins and Peanuts)?

Exactly. So I made these cookies. Because of the high amounts of sugar, these are crunchy, not chewy the way I prefer. That didn't stop other people from eating them!

Cream together sugars, margarine, and butter. Add eggs and mix well. Add vanilla. Gradually mix in dry ingredients. Stir in peanuts and raisins by hand. Drop by spoonfuls on a parchment-paper lined cookie sheet, and bake for 12-14 minutes at 350.
at 12:05 PM 2 comments: