I ended up with an abundance of peaches, so I knew I had to try making another regional dish that looked like cobbler to me - peach pudding! Specifically - "Tennessee Peach Pudding," a recipe I got from Teresa at "Can't Stay Out of the Kitchen," although she also adapted it from several other sources. If you need step-by-step photo instructions, definitely visit her blog. 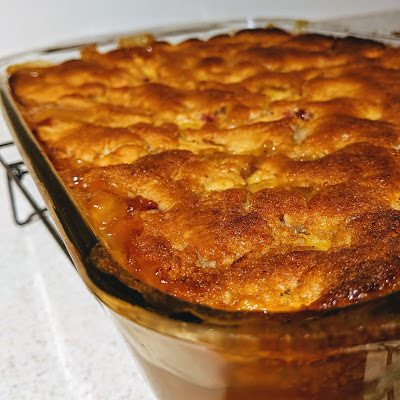 In the end it comes out like a peach cobbler with a thick crust and a sauce built in. I would pay attention to her pan size direction - I used a 9x13 and ended up with charred sugar on the bottom of my oven. But this was more substantial than several of the crisp and cobbler recipes I've made, so I think it's worth slightly downsizing to make it another time. (I also feel I slightly overbaked as my edges are pretty dark!) 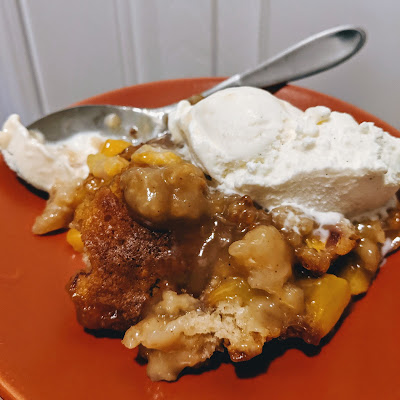 Here in the South, we mean a lot of things when we say the word "cobbler." Here in the Upstate of South Carolina, "cobbler" often means a batter where you pour a thin, almost pancake or cake batter in the bottom of the pan, toss the fruit (mixed with spices and sugar) on top, and the batter bakes up around the fruit. I think the French call that clafouti! But where I grew up in the Pacific Northwest, "cobbler" always meant Bisquick topping, aka biscuit topping, with the fruit and spices mixed in and layered first. 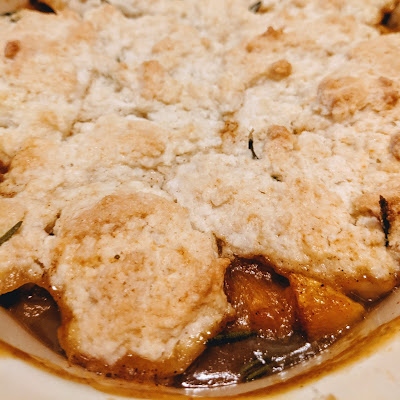 It all started with a smoothie I had at the Swamp Rabbit Cafe - I'm a sucker for drinks with savory elements so when they started advertising the peach rosemary smoothie I had to try it. It was great, the rosemary didn't overpower the peach, but it just tasted like the fresh ingredients, not a lot of extra sugar or syrupy sweetness. After just a few sips, I knew I had to recreate the flavor in a cobbler. At that point we had just hit peach season, which is always cling first, and freestone soon after. I poked around for recipes and decided to adapt one from Sally's Baking Addiction. I liked that her biscuit batter was homemade and included buttermilk, as I had some in the fridge I needed to use up. I also liked that her biscuit batter was not actually full biscuits, which would dwarf the peaches after baking, but just enough to give a clear sense of biscuitness. I cut the recipe in half and baked it in an oval dish but could have used a 9" square pan. I will include the recipe below as I made it, but if you want the full-size recipe, please go visit Sally. She also has recommendations for storage, etc. 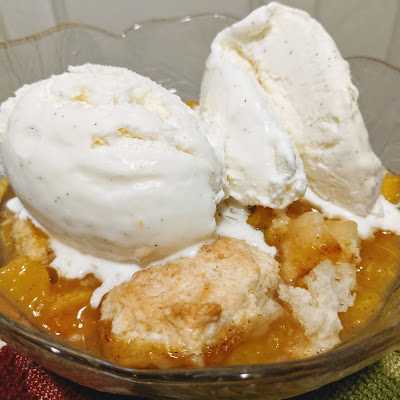 It's almost the end of blueberry season where I live, so I wanted to squeeze this recipe in despite the fact that I posted about pancakes last week. Sorry. Pancakes are delicious. This recipe comes from The Bacon Bible, from which I formerly made a delicious sweet-savory bread pudding. But this recipe is the only one without any bacon, thrown in because they make it at their restaurant for people who aren't feeling the bacon. But my husband and I have a funny memory about $16 lemon ricotta pancakes so I always feel drawn to recipes for them. 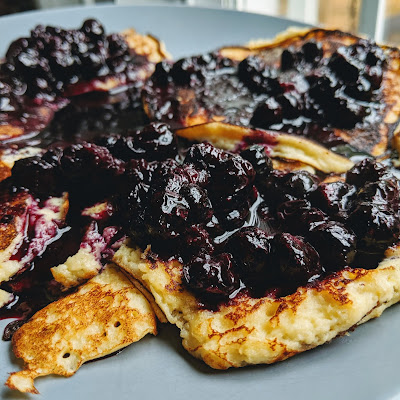 Lemon Ricotta Pancakes with Blueberry Syrup
(from The Bacon Bible)

In a medium saucepan, bring the maple syrup to a boil over high heat. Add the blueberries and cook for 1 minute. Remove from the heat, cover, and let steep while you make the pancakes.*

In a medium bowl, combine the egg yolks, ricotta, butter, and lemon zest and whisk until smooth. In a large bowl, stir together the flour and granulated sugar.

In a separate large bowl, with a clean whisk, whip the egg whites until they hold soft peaks.

Add the egg yolk mixture to the flour mixture and whisk until just combined (do not overmix.) Fold in the egg whites until just incorporated.

Heat a griddle or cast-iron pan over medium heat and brush with butter or spray with nonstick spray. Working in batches, pour the batter onto the griddle by 1/4-cup measures and cook the pancakes for 1-2 minutes on each side, or until they are golden, brushing the griddle with more of hte melted adidtional butter as necessary.

Serve 2-3 pancakes per person, ladled with the blueberry syrup and dusted with confectioners' sugar.

I made a different kind of blueberry syrup since I had blueberries that were close to the brink. I used 2 cups, added a little water and sweetener and lemon zest. I sometimes make a sauce like this for ice cream, where I usually add a cinnamon stick, but I didn't want it to overpower the lemon. I let it boil and simmer away while I made the pancakes.

I was trying to make the recipe lower carb, so went with brown sugar splenda and half almond flour, but really there is so little flour I wish I hadn't bothered. This made them harder to turn, although that's also partly because I'm trying to make pancakes in a skillet pan on the stove and really just need a griddle.


Like pancakes? I seem to make them from around the world! Check out the Finnish pannukakku, Icelandic pönnukökur, Papua New Guinean banana pancakes, the Danish ebleskiver, the Hungarian palacsintas, Austrian kaiserschmarm, the Swedish pancakes from Alaska, and what we call the German oven apple pancake. I also made ratio pancakes from Michael Ruhlman's book, which we can call American, but Rosa Parks might be giving Michael a run for his money with her "featherlite" pancakes.
at 12:00 AM No comments: 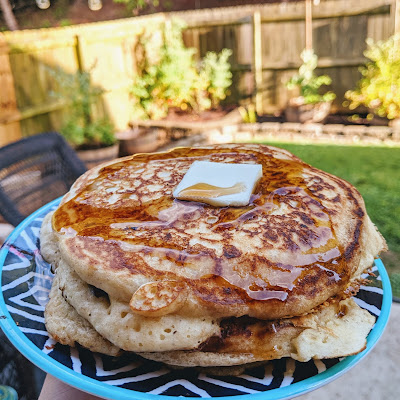 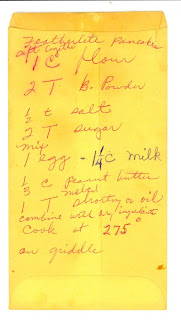 Earlier this year I made a cake from Tessa Huff in her Icing on the Cake cookbook. Loved it! And I found myself making another cake from an earlier cookbook of Tessa's, a recipe that had lingered on my Birthday Cake Pinterest board for a few years, since I love a good London Fog (the drink, but yeah, also the fog in London.) But since my birthday was on a Monday this year, I knew I'd have to make my own cake (most bakeries being closed Sundays and Mondays!) I was very wishwashy about it and had Instagram decide in a poll. This cake beat out the paradise chiffon cake 76% to 24%. The only change I made in the recipe was to use buttermilk instead of cream because I didn't want to go to the store. Scroll past the pictures and recipe to see what I thought! 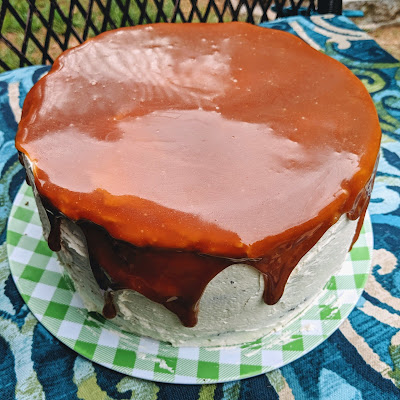 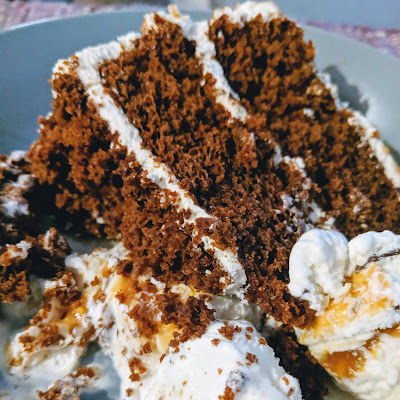 For the Cake:
Prepare the Salted Caramel:
Earl Grey Buttercream:
Assemble the Cake: 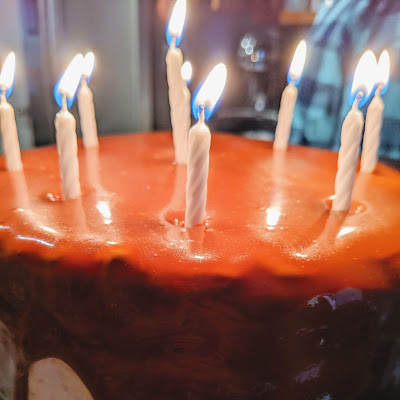 I used Earl Grey Bella Luna Tea from Adagio, and it was very strong and flavorful. I had never steeped tea in butter before, so that was a new experience. I wish I'd let the tea infused butter soften a bit more before making the icing because I ended up with a few chunks (just don't chill it longer than you need to, I'd say.)

I did not like the texture of the cake and I'm willing to assume user error. I substituted the oil type and buttermilk for the cream, and I could tell when dividing the batter that it hadn't really fully combined, so it was uneven. But in the end it was ragged-fluffy instead of moist and dense like I like. And not nearly chocolately enough.

But that didn't really matter in the end because we did not like this cake! I couldn't even finish my one birthday slice and we threw the rest away. I never throw away baking fails unless they are inedible, and I'm sorry to say that this flavor combination just 100% did not work for me. Typically a London Fog drink is a vanilla steamer with an earl grey tea bag steeped in it. I can see the caramel going okay with that, just adding a sweet dessert element. But chocolate is really not a component of that drink and doesn't work here. All three of the strong flavor elements were at huge odds with each other.

I do like the idea of earl grey in a dessert. I know I have another recipe marked to make that is an earl grey tea cake with a rhubarb glaze and I still want to try that one. I also think earl grey would do nicely pre-steeped in the milk/cream for pannacotta, cheesecake, or some other creamy dairy concoction where it could be the primary flavor.

Happy birthday to me!