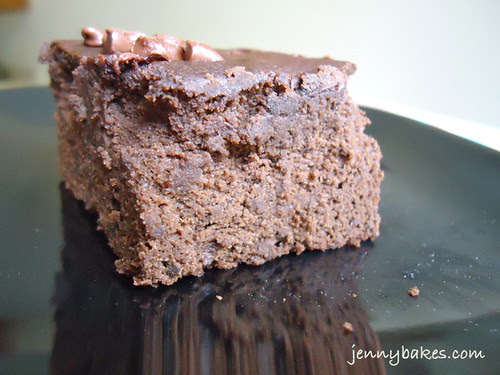 In my many experiments with lower sugar, lower carb baking, I decided to check out a few cookbooks that were recommended in the Living Without Magazine.  I ended up with one I didn't request, 1,000 Gluten-Free Recipes by Carol Fenster.  Heck, 1,000?  I decided to look through it anyway.  As in a previous cookbook I reviewed, anything bread or dessert related goes back to a basic flour replacement recipe that the author has developed, a combination of sorghum flour, rice flour, and cornstarch.  Those ingredients aren't as lower-carb friendly, so I looked carefully through to find a recipe that would base the flour on something else.  I didn't see quite as many along those lines as I was hoping, for instance I don't think there was a single recipe using chickpea flour, but I did come across a few desserts that had other base ingredients.

One recipe that intrigued me was for black bean brownies.  A co-worker recently had me taste cupcakes she made where garbanzo beans were used in place of flour, and this recipe uses a similar strategy.  I decided to make a tweak of the recipe and this is what I'm posting.  There was a lot of sugar in the original recipe, so I've tried compensating for that.  I also left out the xantham gum, because I thought I had some but didn't.  It must have been discarded in the Great Pantry Purge of 2012, when we threw away everything past its date!  If you have xantham gum powder sitting around, adding a teaspoon to the recipe will probably do a bit for the texture.

I also discovered that my beautiful Cuisinart is broken, but I figured out a way to trick it into thinking it is latched.  Sigh.

These brownies are very cakey.  Please try this recipe!  Tweak it and report back!

In a food processor, puree black beans, scraping down sides.  Pulse in brown sugar Splenda and eggs until smooth.  Add remaining ingredients and mix.  Pour into prepared 9" pan.  Bake at 350 for 20-25 minutes, and cool for another 20.

(The original recipe from 1,000 Gluten-Free Recipes had 3/4 cup sugar and 1/4 cup maple syrup.  If you are only looking for vegan gluten-free but don't need lower sugar, I think I'd go back to that original idea.  Brown sugar Splenda seems much better than the white for aftertaste, but you can still taste it.) 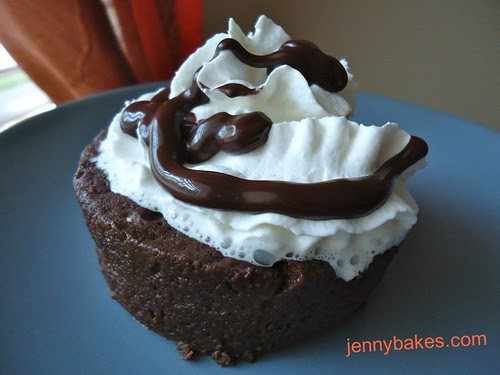 I wish I could shout and say I HAVE FOUND A LOWER CARB CHOCOLATE CAKE AND IT IS DELICIOUS. I'm getting closer, but it isn't there yet.  Honestly this attempt was inspired by another post over at Chocolate Covered Katie, which started as a healthy, vegan microwavable chocolate cake.  I tried using all chickpea flour instead of regular or spelt, and 2 packets of Splenda for the sugar.  Well - 3 tbsp of chickpea flour is not a very dessert-friendly thing.  I did bring home some almond flour tonight, and might try going halvsies of each, to see if that helps.  I also might try another Splenda packet.

Things that are right - the texture.  It is very cakey!  Yay.  Other things that are right - sugar-free whipped cream.  Sugar-free chocolate syrup?  Ech, skip it.  It has a weird lemony taste.  I'm still learning, and I thought I'd just share a recipe in process with you.  I'm not sure I'll ever believe it to be mine, but rather a variation on Katie's.

Home Baked Comfort (Williams-Sonoma): Featuring Mouthwatering Recipes and Tales of the Sweet Life with Favorites from Bakers Across the Country by Kim Laidlaw
My rating: 5 of 5 stars

This is a beautiful book, and a good combination of traditional recipes alongside recipes with twists to them. I loved the bakery and baking blogger features throughout the book, because it connected the recipes to people who bake every day, some of whom were familiar to me.

Because I purchased some local goat cheese at the farmers market, I jumped at the chance to make the Savory Goat Cheese Souffles. 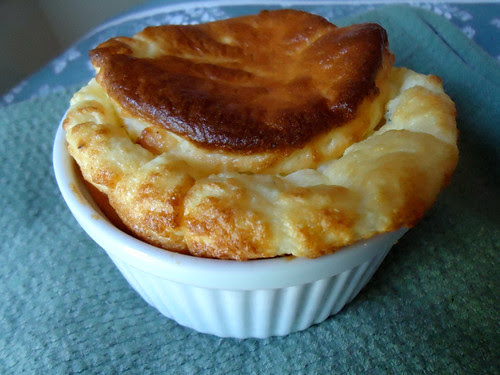 They were delicious, and I apologize that the picture can't be better because I didn't fully grease the ramekin. My tiny error did not negatively impact the taste!

Other recipes I'll try for sure include Pumpkin-Brandy Bread, Hazelnut Streusel Bread, Apricot Pistachio Tart, Dulce de Leche Cake (this is bookmarked for my birthday!!), Brown Butter Pound Cake with Fresh Fig Compote, and the Figgy Cardamom Bread. The pictures and presentation of the recipes make everything look delicious and appealing.
at 10:42 PM No comments:

This is probably a great cookbook for less confident baking vegans, because the recipes are detailed and made from ingredients most people would be able to find in an organic grocery store. I was turned off by the number of recipes that just seemed to sub in vegan ingredients (heavily relying on vegan margarine and vegan cream cheese), without looking more outside the box and using ingredients that stand alone without trying to be something else. The lack of coconut products makes the recipes feel dated, and everything contains refined sugar, which surprised me as many vegans don't believe in using it.

I know this baker won Cupcake Wars on Food Network, but the recipe I tested (Seoul Choco Balls) resulted in dry and crumbly cookies, after I spent $8 on macadamia nuts, phew. I think I'd focus more on the cake and cupcake recipes, since that is more what she is known for. 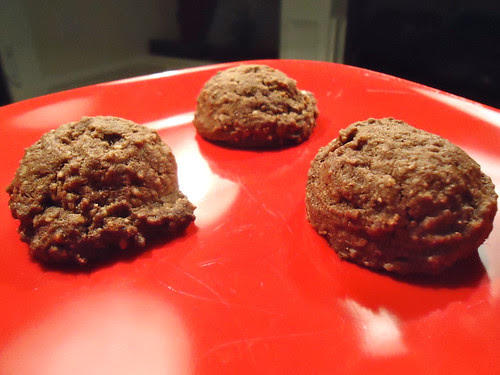