Edd Kimber recently published his first cookbook, One Tin Bakes, not yet available in the USA. He recently posted a picture from one of the recipe sin it - Salted Tahini Chocolate Chip Cookie Bars. If I know anything about recipes, it is that cooks tend to "borrow" from one another, intentionally or not. So I went looking, and found that Julia Moskin had posted Danielle Oron's Salted Tahini Chocolate Chip Cookies in New York Times Cooking about two years ago, which was a very popular recipe. Between cookie form and bar form, I'd be surprised if these two recipes had any differences. I found that David Lebovitz had also played with the NY Times recipe and made a few tweaks to the sugars and chocolate component. I decided to use his recipe for Chocolate Chip Tahini Cookies since it is available on his blog and isn't behind a pay wall. 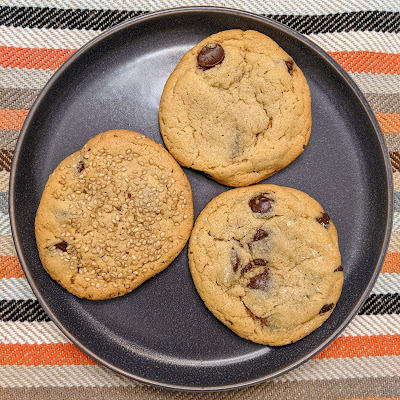 One comment I saw frequently between David and Danielle's recipes was that people liked the dough more than the cookie itself, that the tahini flavor was not as apparent once the cookies were baked, etc. So I did some experimenting when I baked the cookies, like not adding salt to the top, or adding sesame seeds before baking. I found that my favorite of the three was just the plain cookie, no added salt or sesame. But the comments are also right in that the dough is pretty damn spectacular and I went with eating the dough rather than baking the cookies for probably half the batch. I'm not ashamed. I used bittersweet chocolate chips from Ghiradelli because it's what I had; David makes a big thing of using chocolate shards and I have no doubt those would be tasty, just not as easy for me to acquire. 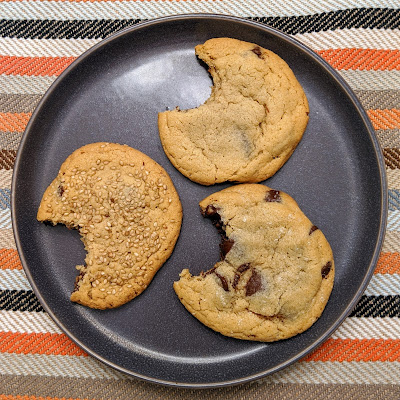 (Salted) Tahini Chocolate Chip Cookies
(as adapted from Danielle Oron by David Lebovitz, please see his recipe for more recipe and ingredient information as well as other tips)

8 tablespoons (115g, 4 ounces) unsalted butter, at room temperature
1/2 cup (120ml) tahini, well stirred
1/2 cup (100g) granulated sugar
1/2 cup (90g) packed light brown sugar
1 large egg, at room temperature
1 large egg yolk
1 teaspoon vanilla extract
1 cup plus 2 tablespoons (150g) flour
3/4 teaspoon baking soda
1 teaspoon kosher or sea salt
2 cups (280g) bittersweet or semisweet chocolate chunks, or chocolate chips
flaky sea salt (optional)
1. In the bowl of a stand mixer, beat the butter, tahini, granulated sugar and brown sugar on medium speed for 2 to 3 minutes, until fluffy. (The dough can also be made in a large mixing bowl, stirred with a spatula.)
2. Stop the mixer and scrape down the sides. Add the egg, the yolk, and vanilla, and continue to mix for another minute, stopping the mixer to scrape down the sides of the bowl during mixing, to make sure the eggs are getting incorporated.
3. In a small bowl, whisk together the flour, baking soda, and kosher or sea salt. With the mixer on low speed, add the dry ingredients until just combined, then add the chocolate chips. Do not overmix. Cover the dough and refrigerate overnight.
4. Preheat the oven to 325ºF (160ºC). Line two baking sheets with parchment paper or silicone baking mats.
5. Form the cookies into rounds using an ice cream scoop, or your hands. For small cookies make each 1 1/2-inch (3,5cm), for larger cookies, make them 2-inches (5cm) round. Place them evenly spaced on the baking sheets, 3-inches (8cm) apart). Bake one sheet at a time, so you can keep an eye on them, in the middle rack of the oven.
6. Bake the cookies, turning the baking sheet in the oven midway during baking, until the cookies are golden brown around the edges but still pale in the center. For small cookies, about 12 minutes, for larger cookies, about 14 to 15 minutes. Remove from the oven, sprinkle cookies with a bit of flaky sea salt, and let the cookies cool on the baking sheet. Bake the remaining cookies the same way.
Storage: These cookies will keep for two or three days at room temperature, but are definitely better the same day they're baked. The unbaked dough can be refrigerated for up to one week, and frozen for up to two months.

We have two blueberry plants in our backyard and they are producing a good number of blueberries (for some reason the birds don't seem interested this year.) I went looking for recipes that use berries and cake across Martha Stewart's Cornmeal-Berry Sheet Cake. I decided that since it's just in a 9x13 pan (not really a sheet pan) I could probably adapt it to be grain-free and slightly lower-sugar. So I did. Follow the links to the original recipe; my recipe is below. I baked this on July 4th but in reality we ate it for breakfast on July 5th. 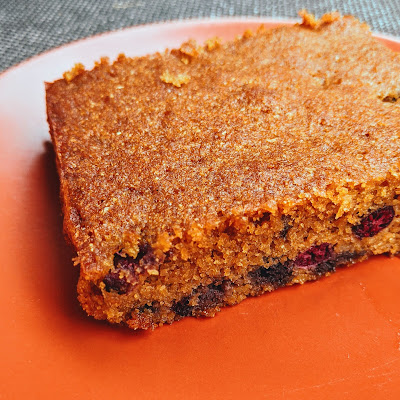 Whisk together flours, cornmeal, baking powder, and salt in a bowl.

Beat butter and sugar on medium-high speed until well combined, about 2 minutes. Add eggs, one at a time, beating well and scraping down sides of bowl as needed. Beat in vanilla. Add flour mixture in 3 batches, alternating with 2 batches of buttermilk and beating until just combined. Spread batter in prepared pan. (If using my adapted version here, batter is rather loose and soft, do not despair!)

Sprinkle berries over top or gently incorporate into batter. Bake until golden brown and a toothpick inserted into center comes out clean, about 1 hour. Let cool completely on a wire rack. Remove cake with parchment and cut into pieces (3 or 4 on short side, then 4 or 6 on long side).
at 12:00 AM No comments:

One of the last places we ate in "normal times" was a local pupuseria - a place that sells pupusas (and more). A pupusa is a corn griddle cake filled with a variety of ingredients. Since COVID-19 shut down the ability to go out to eat, we've been using our local delivery apps to try some of the random local restaurants. My husband loves all Latin American foods and would happily eat inside that cuisine every day, so we've tried everything from Dominican to Colombian to Salvadoran. (I seem to prefer Colombian the most, with the arepas and empandas.) 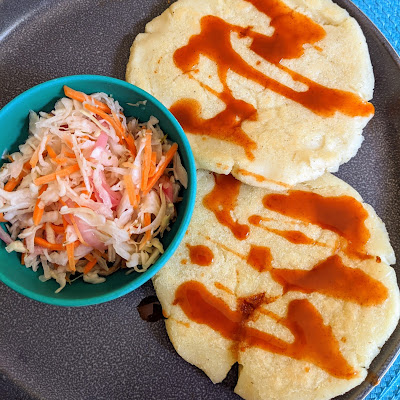 Both El Salvador and Honduras claim the pupusa, which is his absolute favorite, so much so that we declared Sunday to be Pupusa Sunday. Most of the time, we get them from a place that makes Salvadoran and Honduran food. I like the chicharron & frijol, Nathaniel usually gets hongos (mushroom) and espinaca (spinach.) I hate long food blog intros but I promise this is all relevant. Two months ago, I noticed one of my Instagram friends posting food she'd made that was part of the "Rainy Day Bites Cookbook Club." I looked into it and it was started by Deborah Balint. She picks a cookbook each month and specific recipes and posting dates for the dishes. I loved this idea and invited myself along (it seems to work that way anyway) and meant to do the June cookbook but time got away from me. For July, though, I couldn't pass up a chance to make pupusas after everything I've explained previously.

The cookbook for July is We Are La Cocina. La Cocina is an "incubator kitchen" in San Francisco, a nonprofit working to provide commercial kitchen space for women, immigrants, and people of color. The cookbook is beautiful and contains profiles of women who have started business there, found a passion, etc. Most have at least one recipe; several have multiple, and the variety of backgrounds is reflective of that community. This is a cookbook to keep on my shelf for when I'm curious about a specific cuisine (there are a few recipes from the elusive filipino cuisine that I read about but haven't tasted, for instance.)

The pupusa recipe comes from Maria Del Carmen, who owns a business called Estrellita's Snacks.  She walked to California from El Salvador and ended up starting this successful business. I would love to try her pupusas someday, but for now I was happy to try her recipe. There are pictures in the cookbook showing the process but I found even more detailed steps on her Instagram account.

I won't include the recipe here because really, you should buy the cookbook of course, but so much of a pupusa recipe is about feel. I feel I may have not hydrated the corn flour enough, and totally meant to use beans in these but discovered we didn't have any after everything else was already ready. I clearly need to try the recipe again. I did make Maria's recipe for curtido, that's what looks a bit like coleslaw but is more of a quick pickled cabbage with a little bit of a kick from a pepper you can't see. Instead of the traditional (somewhat thin) salsa we always get from the restaurant, we prefer our pupusas with Cholula chipotle hot sauce (not a paid advertisement, we just like it.)

Before I tried the recipe for the first time, I also watched a bunch of YouTube videos since I usually learn a lot from real home cooks. One video is Curly and his Abuelita making pupusas together, another is all in Spanish but uses an unknown (to me) ingredient called loroco (which seems pretty popular on the internet for pupusas) and she makes them very differently from most Salvadorans I've watched, and then one that was really fun where three Salvadoran Moms try each other's pupusas and vote for the best. They have opinions!

If you have heard of the Levain Bakery, you will know of their giant, soft, thick cookies. I came across a recipe claiming to taste just like them and was intrigued - Melissa Stadler at Modern Honey has a made a number of varieties. I was looking for recipes to use up some dried cranberries and walnuts I had sitting around and decided the oatmeal raisin cookies would be the perfect chance. Please visit her site for all the tips and tricks - the method is really quite different from a regular cookie recipe so you will want to make sure you know what's up. I made a half recipe, only five cookies, since I was the only person who would end up eating them. 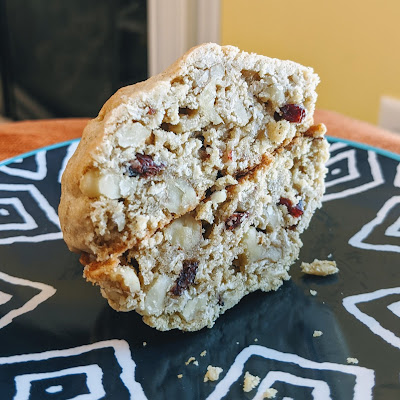 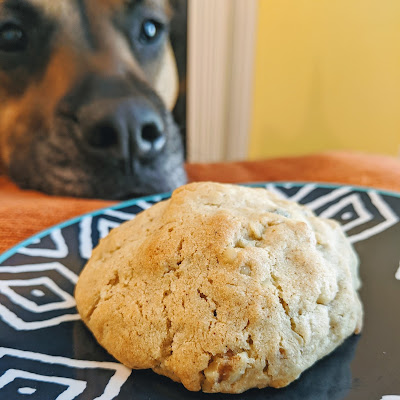 -I just used 1/4 cup more ap flour because I was out of cake flour
-I couldn't find any cornstarch in my cupboard and the Instacart person couldn't find any at the store (eyeroll) so I subbed tapioca flour and this seemed fine
-I doubled the cinnamon, always.
-I used dried cranberries instead
-These instructions seem crazy. 410?! Use cold butter?! Bake only 9-11 minutes? Just follow what she says and go against your instinct of when they are done. It pays off.
at 12:00 AM No comments: