Gingerbread Cake with Date Syrup Sauce from The Flavor Equation

I'm back with another recipe from The Flavor Equation by Nik Sharma, and it was so perfect for the holidays. I just happened to have a giant jar of Iraqi date syrup in my pantry, so I was thrilled to have a use of it in this sauce. I didn't have bourbon so I left it out but will leave it in the directions below (which are from Nik Sharma's website as well as the book, which I recommend.) This was the end of the month challenge for the Rainy Day Bites Cookbook Challenge, an activity that has been such an excellent diversion for this year. 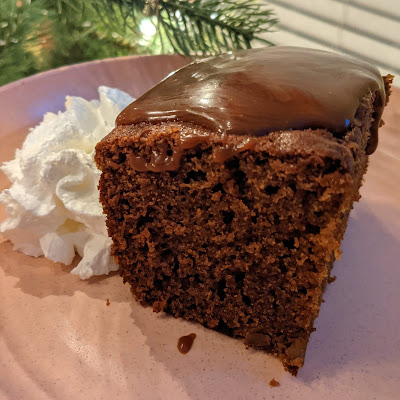 If I made this again I would have baked it 5 minutes less (I was worried about it being done enough and that left it just a little bit dry.) I still think the Smitten Kitchen take on Gramercy Tavern's gingerbread is my favorite, but it is legendarily difficult to get out of the pan - not a problem with this one. This also had some unique techniques involved, and I almost forgot to mix in the hot water at the end.

For the date syrup bourbon sauce:

Melt the butter in a small saucepan over medium heat. Remove from the heat and stir in the ginger, black pepper, cardamom, and lime zest. Let steep for 10 minutes.

Sift the flour, baking soda, and salt through a fine-mesh sieve into a large bowl. Reserve 2 Tbsp of the flour mixture in a small bowl, add the crystallized ginger to it, and toss to coat well.

Preheat the oven to 325°F [163°C]. Place the sugar, honey, and molasses in the bowl of a stand mixer. Scrape out the melted butter from the saucepan with a silicone spatula and add it to the mixer bowl. Using the paddle attachment, mix on medium speed until it turns a toffee-brown color, 4 to 5 minutes. Stop the mixer and scrape the sides of the bowl, add the crème fraîche, and mix on low speed until combined, 1 minute. Stop and scrape down the bowl. Mix in 1 egg at a time on medium speed until combined. Add the sifted dry ingredients and mix on low speed until combined, about 30 seconds. Stop and scrape down the sides of the bowl. On low speed, add the water and mix until combined. Remove the bowl from the mixer and scrape the sides. Fold in the crystallized ginger and transfer the cake batter to the prepared baking pan. Bake until the cake is golden brown on the surface and a skewer inserted in the center comes out clean, 50 to 60 minutes. Remove from the oven and let cool completely in the pan. Run a knife along the edges of the pan to release the cake and transfer to a serving plate.

To prepare the date bourbon sauce, melt the butter in a small saucepan over medium-high heat. Swirl the butter in the saucepan until the milk solids start to turn red. Whisk in the date syrup and bring to a boil. Remove from the heat and whisk in the cream, followed by the bourbon and the salt. Transfer to an airtight jar and refrigerate until ready to use. You can make this sauce 2 days ahead of time.

To serve, cut the cake into slices and serve with sweetened crème fraîche, a little lime zest, and a generous drizzle of the date bourbon sauce.

I used sour cream for the crème fraîche but would have used plain yogurt if I'd had it. I made a half recipe of the sauce, without the bourbon or any replacement for the alcohol, and that was enough for us! I also only had about 2/3 cup molasses so used date syrup for the rest of that as well.

I had leftover butternut squash to use, and ordered myself my own hazelnuts, and had wanted to make this recipe forever. I also had fresh cranberries still leftover in the freezer, so I added them to half the batter, but this greatly increased the baking time due to the amount of moisture! If you make them with the grain-free ingredients, prepare to bake them up to twice as long as the recipe indicates. 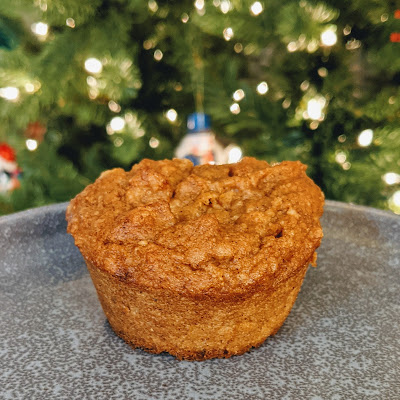 Butternut Squash and Hazelnut Muffins
(based on the recipe at Italian Food Forever, but modified for grain-free ingredients and to make half as many)

I follow a handful of bakers in social media, and last week Louise Miller tweeted about the Los Angeles Times holiday cookie list. I immediately knew which recipe I would be trying, because I'm a sucker for cardamom (so much so that I ended up not even having enough for this recipe, and now I'm out!) and immediately knew I could use my holiday plum butter instead of the prescribed raspberry jam. I buy plum jam and plum butter any time I see it at an import store or international grocery because it's rather hard to find in the United States yet is is a standard holiday flavor in some places in Europe, I imagine because of the Sugar Plum Fairy. 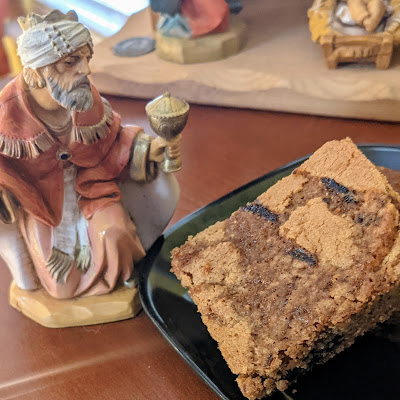 You can substitute any complimentary flavored jam, but the author of the recipe is clear that if it's too thin, the dough will absorb it rather than bake it as a self-contained entity. My plum butter did sink down a bit and not do as much marbling on top, but it tastes delicious. The cardamom adds an element of depth

Fudgy Brownies from A Good Bake

I made the fudgy brownies recipe from A Good Bake by Melissa Weller and Carolynn Carreno. It is always a good idea to see how a baker's brownies are, and these were . I liked the way the recipes are laid out, very clear, and many of the more complex baked goods come with full-color photographs of the major steps. This will be one to add to my collection because next year when I focus my reading on Non-Western Europe, I will have to make khachapuri and babka, at least.

I am putting the recipe in more of a standard format, but the cookbook is laid out in a more precise fashion, with preparation notes, making notes, technical notes, and more. I felt very clear on what would be required. 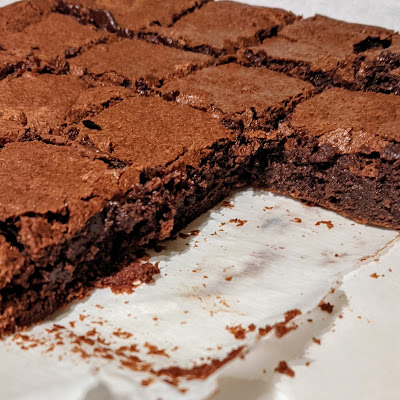 Arrange the oven racks so one is in the center position. Preheat the oven to 400 F.

Spray the bottom and sides of an 8-inch square baking pan with nonstick cooking spray. Cut a piece of parchment paper 8 inches wide and 15 to 16 inches long. Lay the paper in the pan so it travels up and over two of the sides. Spray the paper with cooking spray.

Pour 1-2 inches of water into the bottom of a small saucepan and choose a bowl that fits over the saucepan to make a double boiler. Make sure the water is not touching the bottom of the bowl; if it is, pour some water out. Bring the water to a boil over high heat, then reduce the heat to medium-low to maintain a gentle simmer.

Roughly chop the chocolate. Put the butter and chocolate into the bowl of the double boiler and melt them, using a heat-proof rubber spatula to stir and scrape down the sides of the bowl so the chocolate doesn't burn.

Remove the bowl from the double boiler and wipe the bottom of the bowl so no water drips. Add the sugar and vanilla and whisk them in. Add the eggs one at a time and whisk until the batter is shiny and smooth, 1-2 minutes. Add the salt and flour and stir with a rubber spatula until no flour is visible.

Using a rubber spatula, transfer the batter to the prepared pan. Use the spatula to smooth out the top of the batter.

Place the brownies on the center rack of the oven and bake for 20 minutes, rotating the pan from front to back halfway through the baking. Remove the brownies from the oven and cool on a cooling rack. the tops will appear dry, but the insides will should remain fudgy if you poke the center with a toothpick or cake tester. Holding the sides of the parchment paper, lift the brownies out of the pan and place them on a cutting board. Using a large knife, cut the brownies into 16 equal pieces.

Store the brownies in an airtight container at room temperature for up to 1 week or freeze for up to 3 months.

Here are the recipes I really have my eyes on from A Good Bake: