Not everyone knows that my husband and I are in the process of adopting two boys, which means I am in the process of learning how to cook for kids, which I haven't ever done! I had bought hot dogs when they were first supposed to start visits, but covid got in the way for a few weeks. So then I had these hot dogs I either had to eat or throw away. Luckily I had seen a recipe for corn muffins with hot dog pieces in them, kind of like a quick corn doggish thing. I still don't know if kids like them, but it was a good idea! I'd give credit for this recipe but it's a combo of a few. 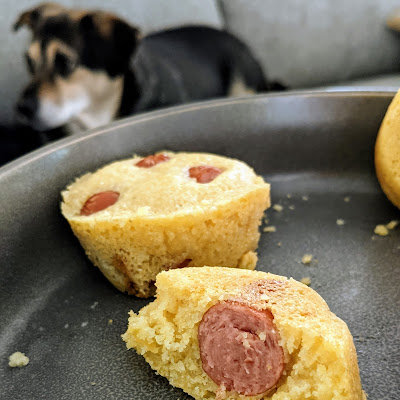 I was first exposed to okonomiyaki through a Latin American restaurant in town, ASADA, which offers "Okonomiyaki À La Latin" on their Saturday brunch menu. In their treatment, this Japanese savory pancake was combined with avocado, chipotle, and meats prepared the Latin American way. It was delicious! When the Rainy Day Bites Cookbook Club had a pancake challenge from East: 120 Vegan and Vegetarian Recipes from Bangalore to Beijing by Meera Sodha, I was drawn in to the Napa Cabbage Okonomiyaki. I do not know how traditional this okonomiyaki is either, does it usually have this kind of cabbage? Is it usually vegetarian? But since I only had the fusion version to compare it to, I will just have to consider it delicious. This was a fast and easy lunch for two. 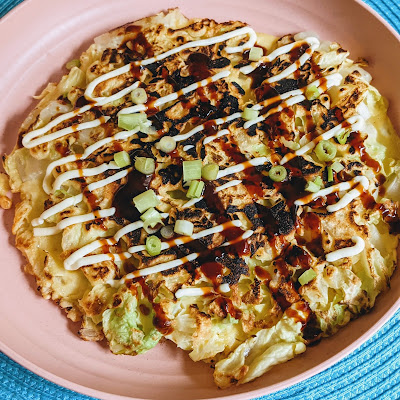 For the okonomiyaki sauce

Whisk the flour, salt, eggs, and 2/3 cup water together with a fork in a mixing bowl until there are no lumps and you have a smooth batter. Add the cabbage and the green onion whites, and mix well to coat all the vegetables. Now make the okonomiyaki sauce: put the ketchup, A1 sauce, and date syrup into a small bowl and mix well.

To cook the okonomiyaki, heat a tablespoon of oil in a small frying pan over a medium-high flame.* Add half the batter to the pan and flatten it with a spoon or spatula to help it into a circular pancake around 1-inch deep. Cook the first side for 3-4 minutes. You should see hte scraps of cabbage and batter at the edges of the pancake starting to brown and crisp. If it is browning too fast, turn down the heat a little. When it's ready, turn the okonomiyaki with a spatula for the other side for a further 3 minutes. Turn out onto a plate and repeat with the second half of the batter.

To serve, crisss-cross the surface of the okonomiyaki with the sauce and some mayonnaise, then liberally top with crispy onions and the reserved green onions.

-I added the water to the ingredient list because I'm bound to forget it if it isn't listed.
-4 cups shredded Napa cabbage is probably not even going to be half of one Napa cabbage. It would be a mistake to use more than what is called for because the batter will never cover it. I also ended up wishing I had sliced it a little thinner closer to the root.
-I had date syrup because of my year of Middle Eastern cooking and baking, but you might not. I think molasses or sorghum or honey or maple would all work but all taste a bit different.
-I thought I had crispy onions when I started making these but discovered I was wrong. I do believe this edition would have elevated mine okonomiyaki!
-I found medium-high to be too hot, but I have an electric stovetop.

-This is going to go on my wishlist! I got it from the library.
-The only recipe I've tried so far is the Vietnamese Coffee Ice Cream, which was great sandwiched between crispy chocolate chip cookies.

Other dishes I want to try include:

Speaking of pancakes (since crepes are part pancake) -

Like pancakes? I seem to make them from around the world! Check out the Khobz Al-jbab from the Arabian peninsula,  Finnish pannukakku, Icelandic pönnukökur, Papua New Guinean banana pancakes,  kauk moto from Myanmar, the Danish ebleskiver, the Hungarian palacsintas, the Kaiserschmarrn or "Emperor's Mess" from Austria, the Swedish pancakes from Alaska, and what we call the German oven apple pancake. Some pancakes seem like they might be from other places, like these Crepes with Roasted Bananas and Barbados Cream. I also made ratio pancakes from Michael Ruhlman's book, which we can call American. I've made several more American pancakes, like the recipe from Rosa Parks held by the National Archives, another variation on lemon ricotta pancakes. Pancakes can also be savory, like scallion pancakes from China (also called cong you bing) or the Onoyomiyaki from Japan.

This is a recipe that started with the Blueberry, pistachio & coconut cake in Simply by Sabrina Ghayour. (This was the January cookbook for the Rainy Day Bites Book Club, but this recipe was an additional one I made on my own.) Honestly, it feels like my recipe now. The USA version of the cookbook clearly made errors in the conversions (1 1/2 cups of butter instead of 1 1/2 sticks? It would be swimming!) and didn't include any salt... all baked goods without salted butter should have a little bit of salt. So this recipe is mine now! (I still wanted to give credit where it is due.) 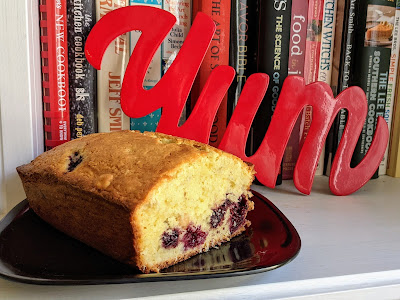 The cake would work with any berry except maybe strawberry, which has too much moisture. The dessicated coconut is not required and you could also substitute with shredded coconut, just know that will up the sweetness factor. You can't see the hazelnuts I threw in here but they did add some crunch. I bet pecans or walnuts would work even better and can imagine a blueberry-walnut or blackberry-pecan version of this cake. You may need to bake it just a little longer than the time given - you want the toothpick to come out clean from the middle. 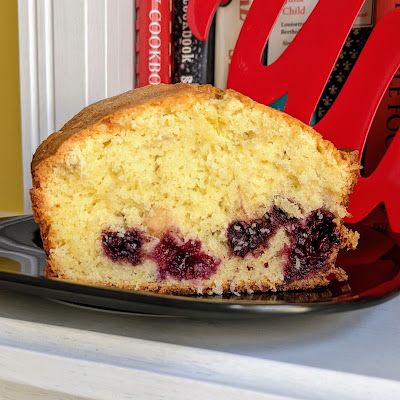 Preheat the oven to 350 F. Line a loaf pan with parchment paper.

Put the eggs, sugar, and vanilla into a large mixing bowl and beat together until well combined. Add the coconut and mix well, then stir in the melted butter until incorporated. Add the flour, baking powder, and milk and mix until smooth. Finally, stir in the hazelnuts and then gently fold in the marionberries.

Pour the batter into the prepared loaf pan and bake for about 1 hour, or until cooked through and a skewer or knife inserted into the center comes out clean. Remove from the oven. Use the parchment to lift cake from pan and let cool. Serve in slices.

The second challenge for January's Rainy Day Bites Cookbook Club was the Goat Cheese, Vegetable, and Za'atar Filo Tart from Simply: Easy Everyday Dishes by Sabrina Ghayour. It called for eggplant and red pepper, but that didn't sound good to me, so I took the general idea and ran with it. For her recipe you should check out her cookbook! I like the changes I made overall, but think I might try replacing the garlic granules with fresh garlic, and I think all of this would be nice sprinkled with aleppo pepper, since I have so much of that from previous recipes. 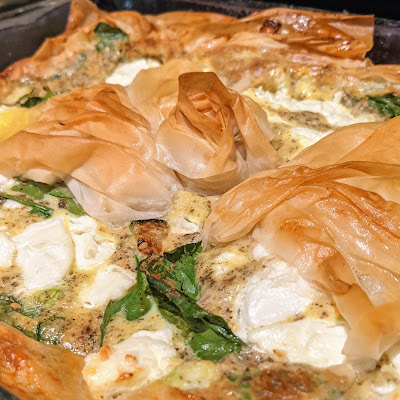 Line a plate with a double layer of paper towels. Place a large saucepan over high heat and pour in enough vegetable oil to coat the bottom of the pot. Add the diced zucchini and cook for 6-8 minutes, stirring occasionally. Remove the zucchini with a slotted spoon. Shake any excess oil off them, then transfer to the lined plate to drain and cool.

Sprinkle the filo base with the zucchini, green onion, and spinach. Beat the remaining 6 eggs and fold in the cream, za'atar, and garlic granules. Season with salt and pepper. Pour the mixture into the filo base, scatter with the goat cheese, and bake for 30 minutes until golden brown.

*It might work best to lightly scrunch the edge, put the rest of the pie together, and then brush the pastry with the egg. I also added scrunched pastry on top of the egg mixture to use up more of the roll of filo, and just dipped it in egg or butter. It's pretty forgiving as long as you work quickly. If you scrunch the sides down too soon the egg mixture might rise above the filo and leave a mess!