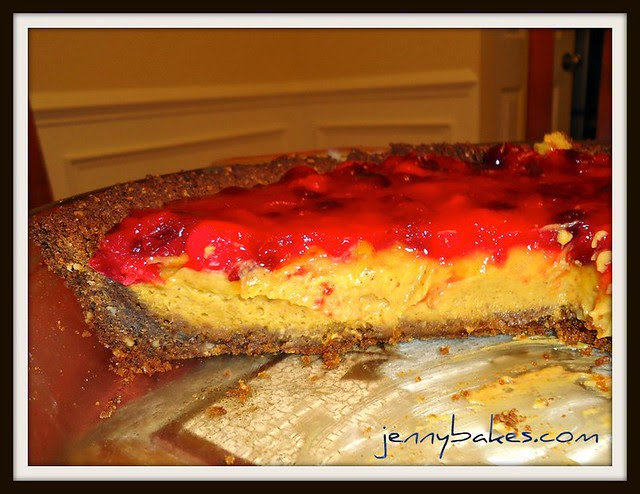 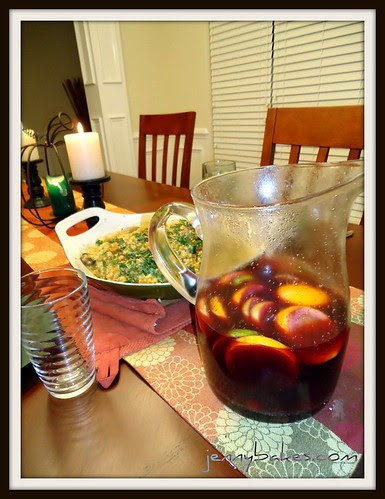 Since we don't eat meat, Thanksgiving is always a fun adventure in cuisine we might not have tried before.  In 2009, we played with Native American ingredients.  2010 saw the first attempts at making tamales and other Mexican treats.  While Spain isn't far from Mexico, I'd been dying to try making paella. Armed with a paella pan actually purchased in Europe that I borrowed from a co-worker, I tackled the following menu:

I had this sangria recipe before, at a friend's house, probably for one of the international dinner nights she hosted.  I remember going there one day after work to drink the leftovers.  This sangria is not kidding around!  Orange juice, lemonade concentrate, brandy, triple sec, sliced lemon, orange, and lime, and maraschino cherries floating around in there.  I made it Wednesday afternoon and let it chill over 24 hours, which is essential for a good sangria.  The wine I used was a pretty full-bodied Bordeaux from Chateau Bel Air.  I know, I should have used Spanish red wine, but I had this on hand and it worked great.

The sangria recipe includes some optional ingredients - sugar, which I added because of all the citrus elements, but I don't really think it needed it.  It also says you can serve it with carbonated water, but I wanted it to drink more like wine and less like fizz.  I think that was a good decision.  I think if I had not cared about making it husband friendly, I might have made it more Thanksgivingesque by pouring cranberries into the glass.  Even if they wouldn't add flavor, they would look pretty!

Then on to the paella.  I had never made paella, largely because I kept reading that it isn't paella without the pan.  I'm lucky to work with a bunch of librarians who are also foodies, so when I sent out an e-mail asking if anyone had a paella pan, I was not disappointed. 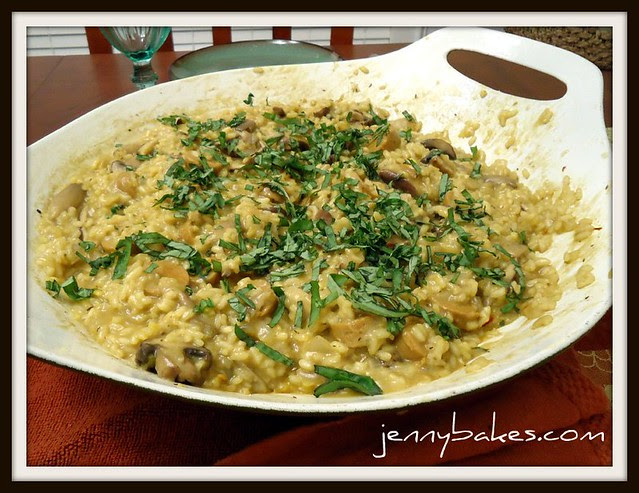 As far as following the recipe goes, the first change I had to make was to find a substitute for chicken stock.  I originally purchased vegetable stock, but ended up using mushroom to really emphasize the flavor of the mushroom.  I do think that is why the saffron color is not as vibrant as it is in many paella pictures I've seen, since mushroom stock is around the color of beef stock, and tends to muddy up the color.  Taste-wise, the decision was a good one.  The recipe also called for ham, which I obviously wasn't going to use.  We had recently tried these field roast frankfurters, a vegan meat substitute, that were reminiscent to me of polish sausage I'd grown up eating.  While it might look like hot dogs in there, which would be unappealing, the flavor was much more complex.  I think having a protein in there really made the dish more of a meal and less of a side.  (After all, traditional paella is usually chock full of seafood and meat).  Since we go vegetarian but not vegan, I was still able to add the butter and manchego at the end.  You can't see them in the dish, but the final creamy and glossy texture is definitely due to those two ingredients, and the cheese adds an incredible flavor dimension. 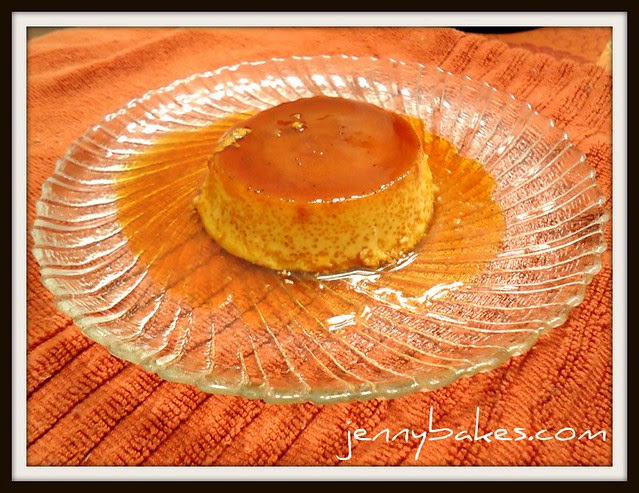 The last recipe for the meal was a pumpkin flan. Is there anything more Spanish for dessert?  I had several different recipes bookmarked, one which called for cream cheese, but then on the 2011 Thanksgiving recipe index put together by the guys over on The Bitten Word, I found a newly published recipe for individual pumpkin flans from Bon Appetit.

The recipe is great, flawless even.  This baker, on the other hand, is incredibly flawed.  I had exactly enough sugar on Wednesday night to make the caramel, so of course I completely destroyed it.  My brave and calming husband Nathaniel went to WalMart on Thanksgiving day to buy more sugar, and I tried it again.  And... again.  I finally figured out that I was being too timid; that the sugar really needed to be cooking on medium-high to get to that amber color without too much crystallization.  Or it could be that as I scrubbed the burnt sugar out of the pan the second time, I gave an edict to the evil kitchen god of caramel, my nemesis.  Whatever, it worked the third time, and the custard mixture was all ready to go in the fridge.

Unfortunately, that isn't the last time I was thwarted.  I was so worried I'd underbake that I overbaked these a tad.  You can see that above in the little dots.  So they ended up tasting a little eggy and not quite as creamy as they should have.  Definitely bake these closer to the 20 minute time than 25, I'd say.  And maybe remove them from the water bath earlier than I did.  Still, you could taste the subtle pumpkin and steeped spices, which paired nicely with the caramelized sugar, a light and not too sweet ending to a Spanish Thanksgiving feast!

I hope everyone had a wonderful Thanksgiving!
at 2:17 PM No comments:

Baking your own pumpkin 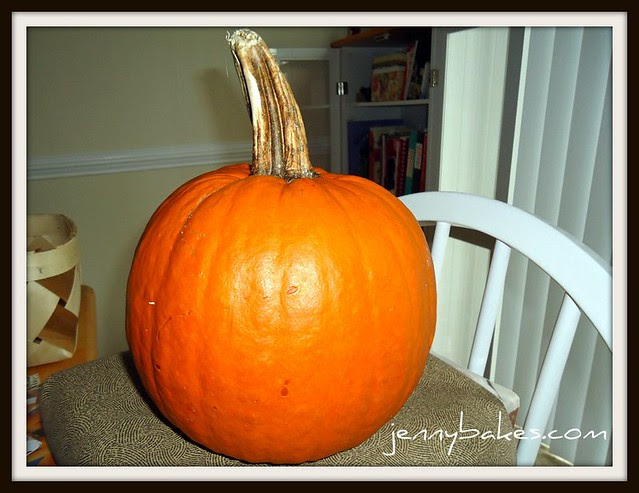 I've always wanted to try baking my own pumpkin, and finally got around to it this year.  There are plenty of sugar pumpkins for sale, so I just bought a cute one and brought it home.  I found recipes online where people suggested a baking/roasting temperature of anywhere from 300-450.  The part that made me skeptical is that all of them including roughly the same amount of baking time.  They can't all be right!  I picked somewhere in the middle and split the pumpkin in half (not easy using my dull knives; really need to get them sharpened), and put it cut side down on the cookie sheet. 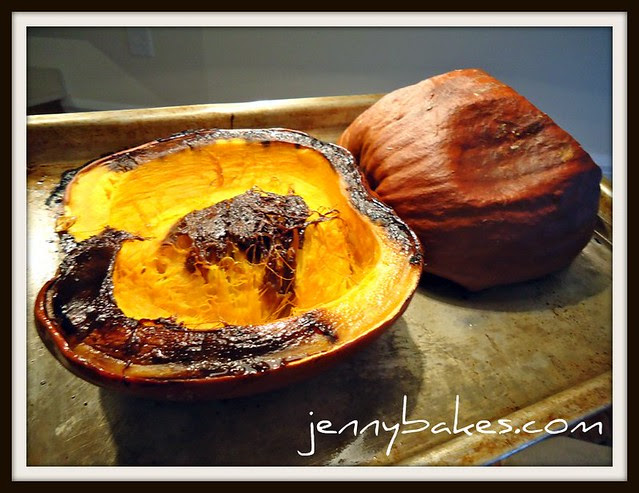 As you can see, I probably let it go too long. The shells were completely hard and sunken in, and there was some sugar-char on the edges. Still, I scooped it out and stuck it in the fridge, forgetting the very important step of pureeing it before adding it to recipes. That just made it more difficult to incorporate into my recipes. Next time I'll know better. The color was definitely less intense than the canned pumpkin I can find in the stores, and that makes sense, considering that many of the canned "pumpkin" you find is actually squash of a different variety (usually hubbard, I think). Here's to actual pumpkin in pumpkin dishes! Stay tuned for how I used it. I still have half the pumpkin left after using it in two recipes!
at 2:11 PM No comments: 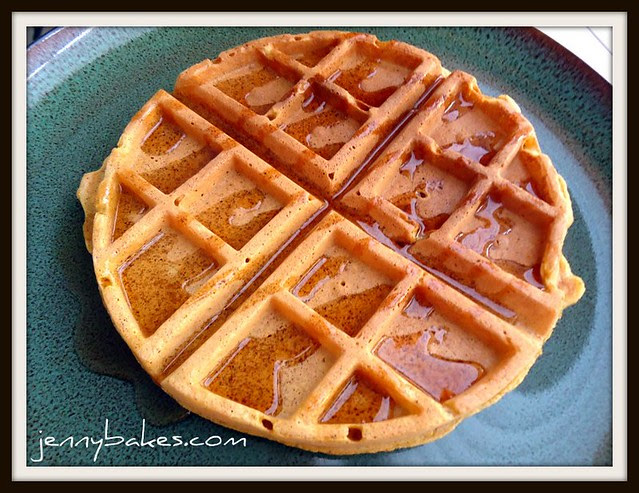 I woke up this morning with pumpkin waffles in my head, although I'd never made any before.  The version in my head was quite decadent with candied nuts and whipped cream, but I did not have those things (veiled reference to So I Married an Axe Murderer, you have to see that movie if you haven't!).

Like any other day with a good idea, the internet is my friend.  It is rare to find something that nobody else had thought of.  This is why I have not yet posted the red velvet pancakes in my head - they've been in other people's heads too!  In my searching, I came across an entire blog devoted to pumpkin waffles.  This blogger was not joking in her quest to develop a pumpkin waffle recipe!  I knew this was the one I had to try.

You can find this recipe on the Pumpkin Waffles Blog, pumpkinwaffles.wordpress.com.  But since U.S. Copyright Law says that recipes can't be protected, I'm going to go ahead and copy and paste it here.  The original blog has great photographs of the steps.  If you make it, please head over to his/her blog and let him/her know how much you liked it.  That's what I plan to do!  This recipe isn't too sweet, the spices are nicely balanced, and you can actually taste the pumpkin.

Directions:
1. Lightly oil the waffle iron with vegetable oil, and set it to the desired temperature.
2. Combine brown sugar and cornstarch in a large bowl. Whisk together to break apart the cornstarch. Add the remaining dry ingredients, and whisk to blend.
3. Separate eggs: yolks go in a medium sized bowl and whites get set aside in a smaller bowl.
4. Add pumpkin and milk to the egg yolks. Whisk to blend and set aside.
5. Whip egg whites with a hand mixer on high until stiff peaks form - about 1 1/2 – 2 minutes. Set aside.
6. Pour melted butter into the yolk/milk/pumpkin mixture. As you pour, whisk to combine.
7. Add the pumpkin mixture to the dry ingredients, and mix them together until just combined. A little lumpiness is fine. That will smooth out when the egg whites are added.
8. Slide the whipped egg whites out of the bowl and onto the mixture you just prepared. Gently fold them in until no white bits are obvious.
9. Once the waffle iron is heated, you’re ready to pour the batter!