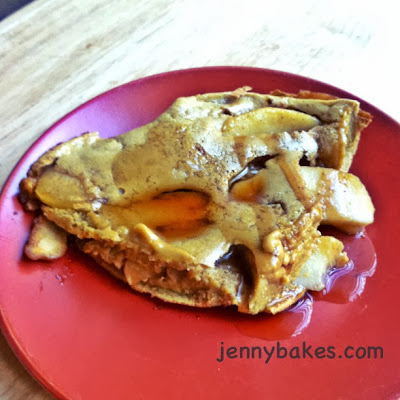 The picture isn't beautiful, but I decided to blog it anyway.  I miss oven pancakes! So I decided to just wing an oven pancake using our standard pancake/crepe made from peanut butter and eggs. I sauted two sliced apples (Pink Lady!) in butter, brown sugar Splenda, and cinnamon, then poured the batter over.  I slipped the pan into the preheated 400 F oven for about 10 minutes and let the batter set.  It wasn't quite the same as white flour, but it satisfied our oven pancake cravings!! Perfect for fall. 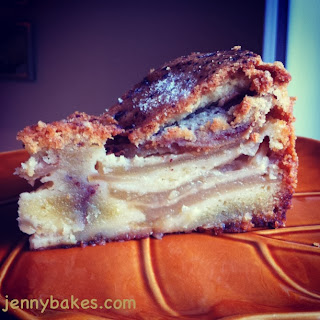 I came across this Cinnamon-Apple Pie Cake recipe via Pinterest, and was intrigued.  I made it for my in-laws when they visited.  It's pretty tasty, and simply, just pile up apple slices in a pan and pour batter over it.  The batter takes on a custardy texture, so I think I would rename it as Apple Custard Cake.  The only pie-like thing is that apples are stacked on top of each other, but the batter is soft and lovely like a custard.

The recipe called for 6-8 apples but I had just gotten local apples that are huge so I used 2 Mutsu and 1 Shizuka, and that filled the springform pan to 2/3 full as directed. Definitely chill it before slicing, but I'd serve it heated back up with ice cream.  I'd also add a pinch of salt to the batter, and maybe some more cinnamon.

1. Preheat the oven to 350 degrees F. Spray a 9 1/2 to 10-inch springform pan with nonstick spray. Line the bottom with a round of parchment paper and then spray again.
2. Layer the apple slices in the pan until they come about 2/3 of the way up the side. (I went a little higher than that and it worked out fine). Sprinkle the cinnamon-sugar over the apples.
3. Prepare the batter by beating the eggs and sugar until light and fluffy. Add the oil and the vanilla and beat well, then stir in the flour. Pour the batter on top of the apples, and sprinkle with additional cinnamon-sugar. Tap the pan on the counter a few times to allow the batter to sink down and around the apples.
4. Bake for 1 hour and 20 minutes, or until a skewer inserted into the center of the cake comes out clean. Cool *completely* in the pan. If you try to remove the cake from the pan while it is still warm, it will tend to break apart. I refrigerated my cake before slicing, and that worked out well. Serve slices with ice cream (warm individual slices in the microwave, if desired).