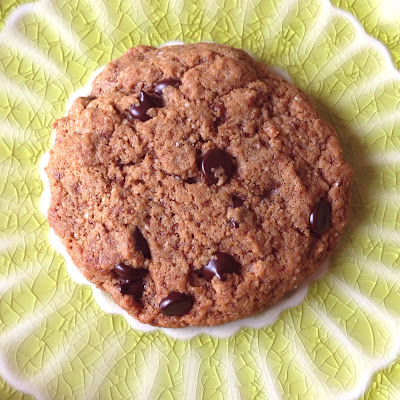 I found this recipe on Ambitious Kitchen, where she makes a paleo version with almond butter. I'm probably never really going to eat paleo entirely or spend money on almond butter, so I made the recipe with peanut butter. Otherwise it's the same. This is a great treat for those of us eating grain-free and lower-carb because the cookie actually feels and tastes like a cookie. Her original post has more ideas on substitutions, so check it out. 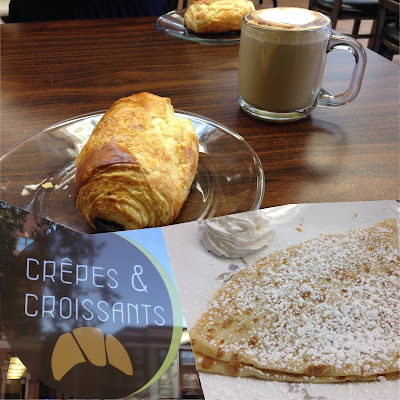 While I do not necessarily think of Columbia, SC as a culinary destination, a growing number of restaurants have been impressing me on visits there for conferences, board meetings, and book festivals. One such place is Crêpes & Croissants, on Sumter Street, right around the corner from the Columbia Marriott and the Sheraton. I always end up at conferences at the Marriott and this is SO much better than pricey hotel breakfast. This would work for lunch too, as they are open until 2 most days.

I went with a librarian friend and we both had interesting coffee drinks, a crepe, and a pastry. I had a sweet lemon crepe (lemon curd and whipped cream), a chocolate croissant, and a cafe miel. Next time I'll try something more savory - their omelets and quiche sounded great too. This place is a bit hidden between chain restaurants but worth seeking out!
at 12:00 AM No comments: 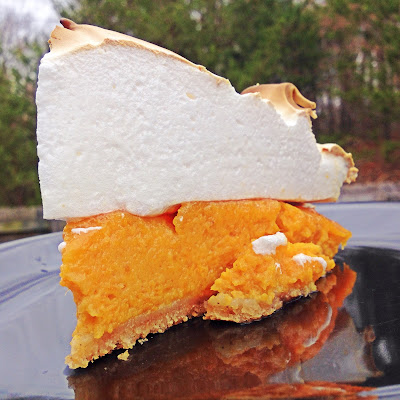 This pie feels completely out of season, and it is, but it was an idea I couldn't get out of my head for Pi Day 2016. This would be the PERFECT pie for Thanksgiving, and I suppose for spring I should have been thinking lemon meringue or something with cream cheese.

It starts with Dominique Ansel's gingerbread crust, which I did not end up caring for much. It's rather more like a soft ginger cookie than a pie crust, making it increasingly difficult to work with, but it did have good flavor. I've had it on my mind ever since I first came across it. Overall it is more subtle than I expected, which makes it more versatile (but I still probably won't make it again, maybe just add ginger to a more tried and tested pie dough recipe.)

The pie itself is a version of a popular pie idea - taking what is normally a Thanksgiving side dish in the United States (sweet potatoes or yams with marshmallows on top) and making a pie version. I used the recipe from a cookbook I have at home, The Southern Pie Book, but it is basically the Southern Living recipe which I will post below. I had to bake the pie 15 minutes longer to get it to set in the middle. I thought it was okay but overall very sweet. And as Mr. JennyBakes pointed out, if you have this as a pie then you won't have it as a side dish, and having sweet potato casserole as a side dish is like a way to sneak dessert into dinner.

Dominique Ansel's Gingerbread Pie Crust
(as seen on Eater, where the pictured pie crust is quite darker than the one I made)

1. Whisk together egg yolk and cream; brush bottom and sides of crust with yolk mixture. Bake 6 to 8 more minutes or until crust is golden. Transfer to a wire rack, and cool. Reduce oven temperature to 350° F.
2. Prepare filling: Stir together melted butter, 1 cup sugar, and next 2 ingredients in a large bowl until mixture is well blended. Add sweet potatoes and next 4 ingredients; stir until mixture is well blended. Pour sweet potato mixture into prepared piecrust. (Pie will be very full.)
3. Bake at 350° for 50 to 55 minutes or until a knife inserted in center comes out clean, shielding with aluminum foil to prevent excessive browning. Preheat oven to 400° F.
4. Prepare meringue: Beat egg whites and next 2 ingredients at high speed with a heavy-duty electric stand mixer until foamy. Gradually add sugar, 1 Tbsp. at a time, beating until stiff peaks form.
5. Beat one-fourth of marshmallow crème into egg white mixture; repeat 3 times with remaining marshmallow crème, beating until smooth (about 1 minute). Spread over pie.
6. Bake at 400° for 6 to 7 minutes or until meringue is lightly browned. 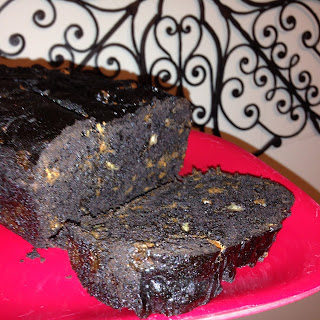 Somehow we are always faced with 3-4 overripe bananas at the end of the week. We always buy more than we can chew, I guess. Often these go into paleo muffins or 1-ingredient ice cream but this time I was craving something chocolatey. I also had some cinnamon chips in the cupboard which demanded inclusion. This was delicious!

Butter a 9×5-inch loaf pan, or spray it with a nonstick baking spray.

Mash bananas in the bottom of a large bowl. Whisk in melted butter, then brown sugar, egg, and vanilla. Place baking soda, salt, cinnamon, flour and cocoa powder in a sifter or fine-mesh strainer and sift over wet ingredients. Stir dry and wet ingredients with a spoon until just combined. Stir in cinnamon chips.

Pour into prepared pan and bake 55 to 65 minutes, until a tester or toothpick inserted into the center of the cake comes out batter-free. Cool in pan for 10 to 15 minutes, then run a knife around the edge and invert it out onto a cooling rack. Serve warm or at room temperature.

*One egg doesn't sound like enough but bananas do a lot of the work alongside the butter to bind this all together.