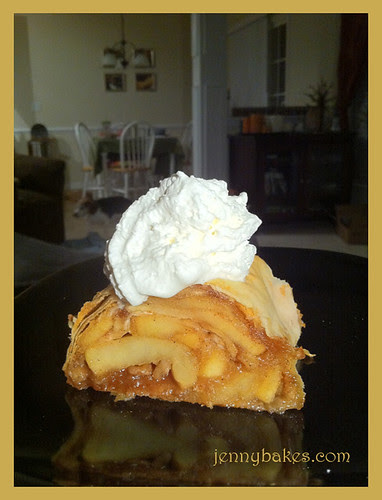 I still exist!  I realize I have not blogged since July, but the start of the academic year was the craziest it has ever been.  Then when I got apples at the SC Apple Festival, I made my Grandma's apple cake, which I had already blogged.  My mutsu apples were getting old, so I knew I needed to bake something this weekend.  Today is the first day of fall, so what better day to smell the house up with apples and cinnamon?

I have made strudel before; I have even made the dough from scratch.  In a pinch, phyllo/filo makes a nice substitute (not quite as tender, but much quicker), and is mercifully low in carbs and calories compared to most pastries.  I decided to play with a phyllo apple strudel recipe that I found on Epicurious.com and make it friendlier for the way we're eating these days in my household.  I have to say that despite its lower sugar and carb content, this is quite delicious, and a great way to celebrate the first day of fall!

Preheat oven to 350 F.  Line a baking sheet with parchment paper. Prepare apples and toss with lemon juice.  Cook over medium heat with cinnamon and brown sugar Splenda, about 10 minutes or until softened.  Remove from heat and let cool while you prepare pastry.

Take two sheets Phyllo.  Coat with cooking spray and sprinkle with graham cracker crumbs (less than 1 tbsp).  Repeat two times.  Cover with half the apple mixture.  Repeat with remaining 6 sheets of dough (work quickly as the dough dries out!).  If using, sprinkle with walnuts.  Roll from short end, and brush with melted butter if you choose to use it; if not, coat well with cooking spray.

Place both strudels on baking sheet.  Slicing before baking is recommended since phyllo bakes pretty crisply, but keep in log shape after slicing.  Bake 25 minutes or until golden brown.

*One half of a phyllo package will have twice as many sheets, roughly.  You might want to double the recipe or add more sheets so as not to waste anything.
at 9:18 PM 2 comments: