This post is really long, but it's all in service to this recipe, and isn't just a random story about what I watched on tv or anything like that.

Caramel has long been a problem in the JennyBakes kitchen, from failed cakes to frustrating tarts. But caramel is a key element in a tarte tatin, and I couldn't read Ducks, Newburyport, whose narrator thinks frequently about tartes tatin, without making the attempt. Not to mention that she specifically uses Pink Lady apples and the Instacart person picking my apples for me had ended up bringing me a 3-lb bag of the same kind of apple! 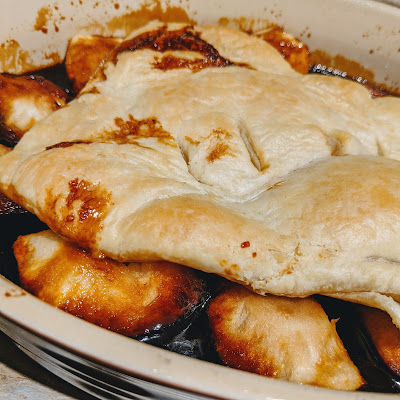 The other appeal to the recipe I decided to use as my basis was that it made use of a "rough puff" for the puff pastry. Anyone who has sat through a season of the Great British Bakeoff (aka Great British Baking Show in the states) knows about a rough puff. But yet I had never had the opportunity to make one. I'll be honest that I was most excited about that! 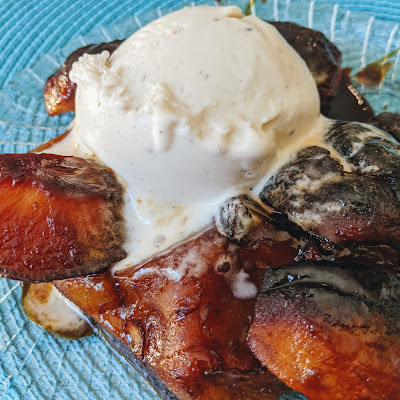 I will share what I am certain is a lovely recipe outside of user error, and then discuss my thoughts on the recipe.

Reader, there are so many places I made mistakes.

First, I decided to make a half recipe. I would be the only person in my house eating it and I figured I could just cut everything in half and use a smaller skillet.

The rough puff was going fine, and fit the skillet I had chosen, but...

The caramel followed the steps described in step 5, but by the time the mixture started to bubble and spit after separating, it was already a pretty dark reddish brown which quickly turned to BLACK BLACK BLACK hahahaha. I definitely over cooked it but to be fair, that was prior to even 10 minutes. Perhaps the lower amounts, perhaps using a nonstick pan, perhaps my infernal electric flattop stove.

So I pressed on. I did not cook the apples long, just arranged them and tried covering them with caramel at least partially (it had the texture of pulled sugar and I definitely knew it was already over but for SOME REASON I decided not to start over.

I had it all arranged in the 6-inch skillet and on a cookie sheet but I kept having this niggling thought in my head... nonstick skillet...plastic handle... IF I PUT THIS IN THE OVEN IT WILL MELT.

So I quickly and sloppily transferred the concoction to a lovely but oval-shaped ceramic baking pan. There were no longer exactly the right number of apples, and the puff pastry was no longer the right shape and covering everything. Yet I pressed on.

There was just no coming back for the caramel. And the lack of heat in the apples I didn't cook plus the late-in-the-game relocation of the puff pastry didn't do it in any favors and I didn't see the layering like I thought I should (in a few select pieces it was perfect and lovely but most of the time it was a lump of unscorched delight in a pool of burned and blackened apple-shaped corpses.

Will I try this recipe again? Oh probably not. I'm not sure it's worth the end result. I'd much rather have an apple pie or apple crisp, one of which is easier to make than a tarte tatin. I take some consolation in remembering Julia Child's episode of the French Chef where she turned her tarte tatin over and it fell apart and loosely spread beyond her serving platter. And she just tucked it all back in and declared it good enough. I suspect she had the opposite problem of me - not enough carmelization! Plus her apple choices seemed a bit willy-nilly and it's clear from the narrator in Ducks, Newburyport, who bakes for a living, that the apple matters. I enjoyed the Pink Lady apples in their slightly baked manner, once the charred caramel was cut off.

I might make the rough puff again, but of course anyone who bakes probably knows that once you see how much butter puff pastry has in it, you don't particularly want to eat it.
at 12:00 AM No comments:

I have been hosting a readalong of Ducks, Newburyport by Lucy Ellmann. It is a stream of consciousness type book of over 1000 pages with very little sentence breaks. The narrator is a mother and bakes pies and cakes for a living. She kept going on about lemon drizzle cakes so I had to do some research.

The entire first page of results for a recipe were all UK websites, which means recipes with grams and self-rising flour. I took the one that looked the best to me and decided to adapt it which resulted in a few problems. I was double checking substitutions on a webpage, just picked one at random, and while it said you would use 1.5 tsp baking powder and .5 tsp salt for every cup of regular flour, when it listed cake flour it said baking soda... and even though I know better, I hesitated and instead of using my brain took this random website as somehow knowing more than me (where are my librarian skills!?) and so of course the first lemon drizzle cake really was a lemon drizzle cake disaster. The soda instead of powder meant the cake sank instead of rising, and all together it had a bit of a savory character to it.  I'm sure cake flour wasn't the right choice either but I had some and have been trying to use little of the all purpose flour in case I can't get any more! 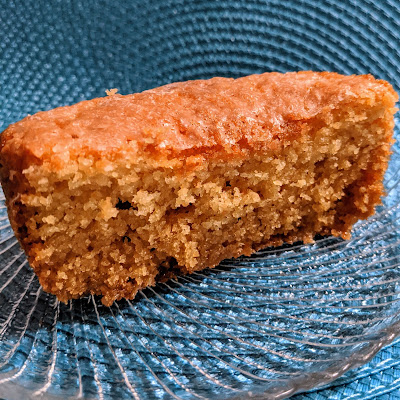 Well I will not be defeated by a simple loaf cake. So I bought more lemons and tried again. This is when I noticed that the recipe is equal weight eggs, flour, sugar, and butter - which means this is a pound cake recipe - which means I probably won't like it made correctly. To me pound cakes are just too dry. But I made the thing, I used baking powder with the flour, I followed the recipe... I didn't think it was great. Like the narrator in Ducks, Newburyport, I was agonizing over a cake recipe that wasn't even one I particularly cared for to start with. 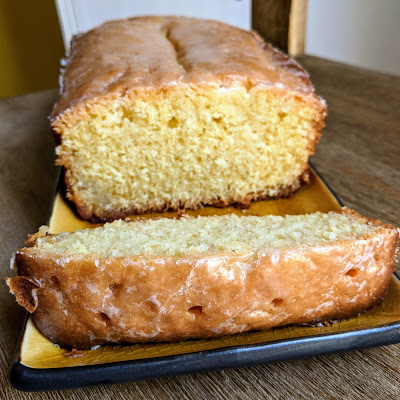 But I do think my attempts at finding cup equivalencies is about right. You can refer back to the original recipe if you prefer to weigh your ingredients. I'm a bad baker; I just can't be talked into finding the scale for a stir and bake recipe.

Lemon Drizzle Cake
(recipe from The Londoner, adapted by me)

Line a 9x4 cake pan with parchment paper and preheat your oven to 350F.

Cream together your cake ingredients until you’re left with a nice smooth cake batter. Pour into your pan and bake for about 30-35 minutes.* While you’re waiting, mix together the powdered sugar and lemon juice until totally smooth. After 30 minutes, check the cake by inserting a skewer into the middle, if it comes out clean, it’s done. If not, give it a few minutes more. As soon as it's removed from the oven, use a skewer to poke holes all over the cake, all the way down to the bottom. Pour over the lemon glaze and leave to cool.

*I found I had to bake at least 40 to get the middle baked but then it felt overbaked. This is an ongoing issue with loaf cakes. Maybe it's my oven?
at 9:01 AM No comments:

When it comes to trending recipes, I'm a sheeple, I'm a lemming. If 99 bakers jumped off a bridge, I would too. So it should come as a shock to nobody that I also made these DoubleTree cookies! I have stayed at many Hampton and Hilton hotels, but I don't think I've stayed at a DoubleTree, so I don't have the memory of these cookies to compare anything to. The recipe looked like the standard Toll House recipe with a little lemon juice, cinnamon, and oats added, and yet I had to make it! You also bake them at a lower temperature than most cookies, and for longer - I think if I made these again I'd just do the normal 350 for 10-12 minutes, as I didn't see any advantage to lower and longer. 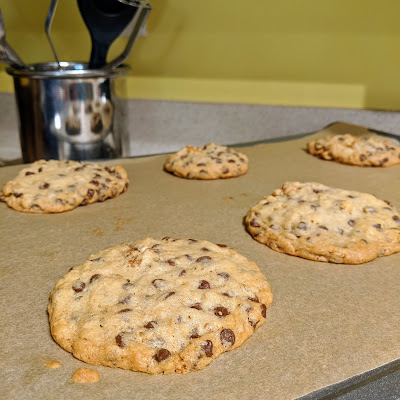 I tried to use the original recipe as published by Hilton because I've also encountered many "takes" on the recipe, so it gets confusing. One person blitzed the oats, rendering them more like a flour (this is the territory of a previous internet cookie legend, the Neiman Marcus cookie. So I followed this recipe to a T except where I didn't... I didn't chop the walnut halves (making them super obvious in the cookie, and I only had mini chips, so used the same amount of minis, which was a LOT.) 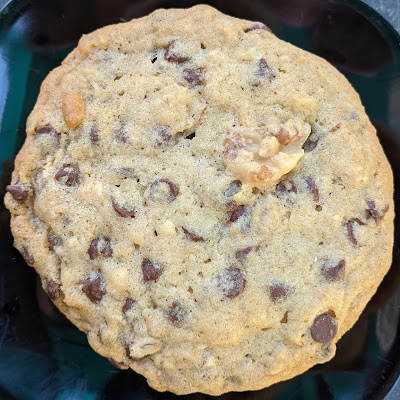 Cream butter, sugar and brown sugar in the bowl of a stand mixer on medium speed for about 2 minutes.

Add eggs, vanilla and lemon juice, blending with mixer on low speed for 30 seconds, then medium speed for about 2 minutes, or until light and fluffy, scraping down bowl.

Remove bowl from mixer and stir in chocolate chips and walnuts.

Portion dough with a scoop (about 3 tablespoons) onto a baking sheet lined with parchment paper about 2 inches apart.

Preheat oven to 300°F. Bake for 20 to 23 minutes, or until edges are golden brown and center is still soft.

Remove from oven and cool on baking sheet for about 1 hour.

Cook’s note: You can freeze the unbaked cookies, and there’s no need to thaw. Preheat oven to 300°F and place frozen cookies on parchment paper-lined baking sheet about 2 inches apart. Bake until edges are golden brown and center is still soft.
at 12:00 AM No comments:

I've discovered another great source for recipes that bakes similarly to how I bake for us at home - grain free, lower-sugar options, etc. It's Gather and Feast out of Melbourne, Australia. I came across one of their recipes from another blog and down the rabbit hole I went. I came out with these veggie-packed brownies, which they originally made with zucchini, sweet potato, and beet. Since quarantine baking is the name of the game these days, I didn't have a beet so I substituted a carrot. And I would do it again, these are super chocolatey and moist. 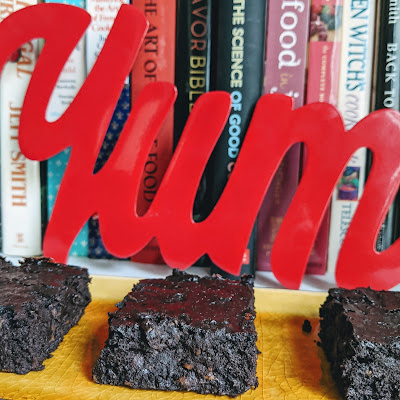 (recipe from Gather and Feast)