I needed a cake for a party and hit the internet for inspiration.  I kept seeing accolades for the Double Chocolate Layer Cake from Gourmet Magazine, March 1999, thankfully preserved on the Epicurious recipe website.  This recipe makes a TON.  It calls for two 10x2 round pans, which I do not have in my collection.  The batter filled three 9" round pans plus two 1 cup ramekins.  SO MUCH CAKE. 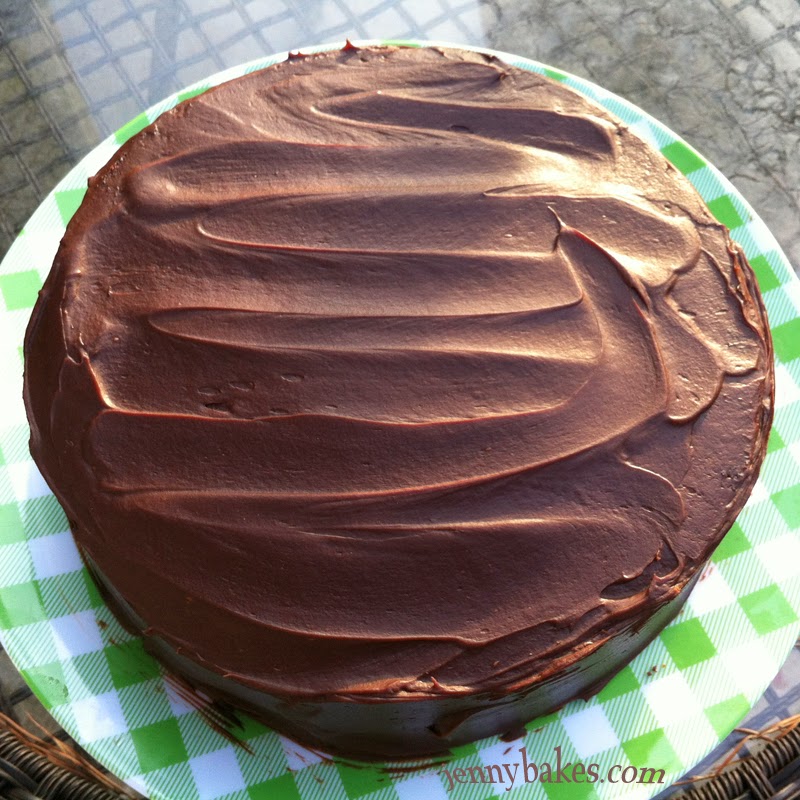 Since I was bringing a cake to a gathering with only four people, I used exactly half the cake layers in my first rendition of the cake - one whole round split in two horizontally, and half of another.  I wrapped the remaining layer and a half in plastic for later.  I put ganache between the layers and on the outside as directed, but I also layered raspberry jam (slightly heated and stirred) directly onto the cake first.  I chilled the cake overnight, but chilling it changes things.  I think if you can avoid it at all, don't let it anywhere cold, just allow longer for the ganache to set. 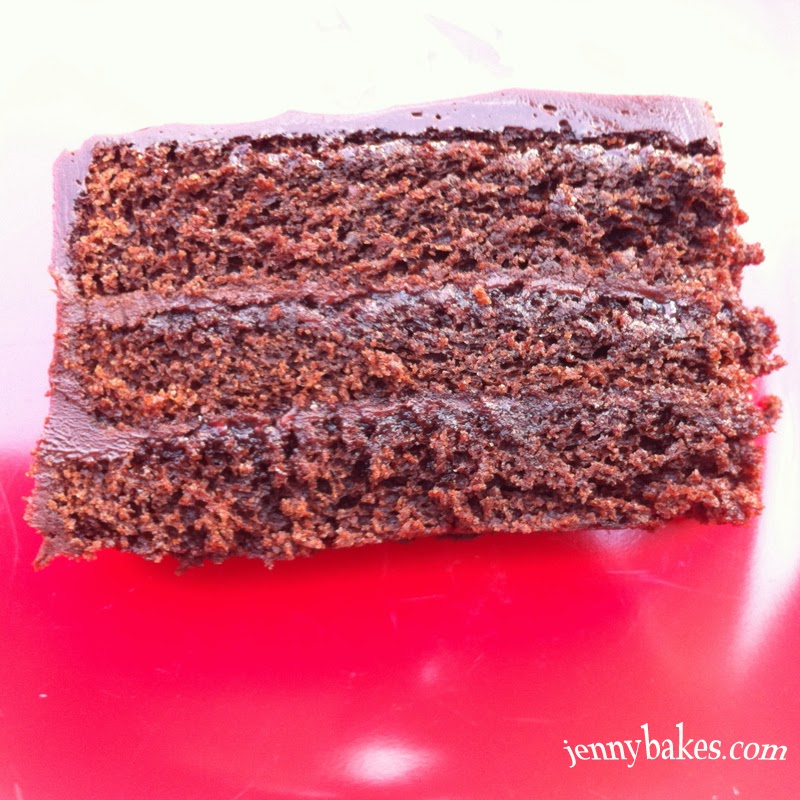 Meanwhile, in another arena of my life, stressful events were occurring.  I recreated the cake, heavier on the jam the second time, and cut it into wedges.  I wrote little notes with each wedge, deeming it Stress Cake.  Does chocolate solve anything?  No, but it can definitely make life a bit easier to handle.

Make cake layers:
Preheat oven to 300°F. and grease pans. Line bottoms with rounds of wax paper and grease paper.
Finely chop chocolate and in a bowl combine with hot coffee. Let mixture stand, stirring occasionally, until chocolate is melted and mixture is smooth.
Into a large bowl sift together sugar, flour, cocoa powder, baking soda, baking powder, and salt. In another large bowl with an electric mixer beat eggs until thickened slightly and lemon colored (about 3 minutes with a standing mixer or 5 minutes with a hand-held mixer). Slowly add oil, buttermilk, vanilla, and melted chocolate mixture to eggs, beating until combined well. Add sugar mixture and beat on medium speed until just combined well. Divide batter between pans and bake in middle of oven until a tester inserted in center comes out clean, 1 hour to 1 hour and 10 minutes.
Cool layers completely in pans on racks. Run a thin knife around edges of pans and invert layers onto racks. Carefully remove wax paper and cool layers completely. Cake layers may be made 1 day ahead and kept, wrapped well in plastic wrap, at room temperature.

Make frosting:
Finely chop chocolate. In a 1 1/2- to 2-quart saucepan bring cream, sugar, and corn syrup to a boil over moderately low heat, whisking until sugar is dissolved. Remove pan from heat and add chocolate, whisking until chocolate is melted. Cut butter into pieces and add to frosting, whisking until smooth.
Transfer frosting to a bowl and cool, stirring occasionally, until spreadable (depending on chocolate used, it may be necessary to chill frosting to spreadable consistency).
Spread frosting between cake layers and over top and sides. Cake keeps, covered and chilled, 3 days. Bring cake to room temperature before serving.
at 4:00 AM No comments:

Somehow I am trapped in this cycle of making the same recipes and not having a lot of new things to post about.  When we were trapped at home (in South Carolina) with snow and ice, twice, I made paleo banana bread.  Snow always has meant sweet treats but sweet can be healthier too.

I used the same paleo banana bread recipe from before, once as bread, and once as muffins with various ingredients folded in.

I actually think the recipe shines best in loaf form, but I have always had to bake it considerably longer than the recipe states.  My bananas might be bigger than your bananas. 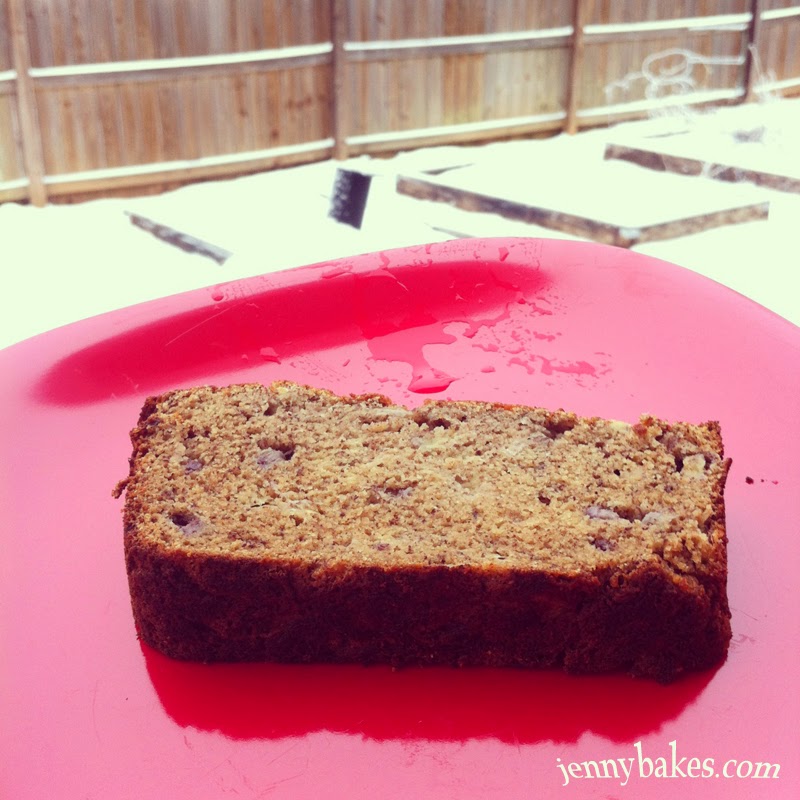 With the muffins, I made some with chocolate chips (definitely not paleo), some with blueberries (still paleo) and some with a cinnamon-splenda streusel mixture that I've been making cinnamon toast with a lot lately, like a crazy person, using sprouted grain bread.  Or should that be "bread" in quotation marks, I'm uncertain.  The biggest issue with these muffins is that in my rush to not add honey but to substitute it with splenda, I forgot to sweeten them at all.  Whoops! 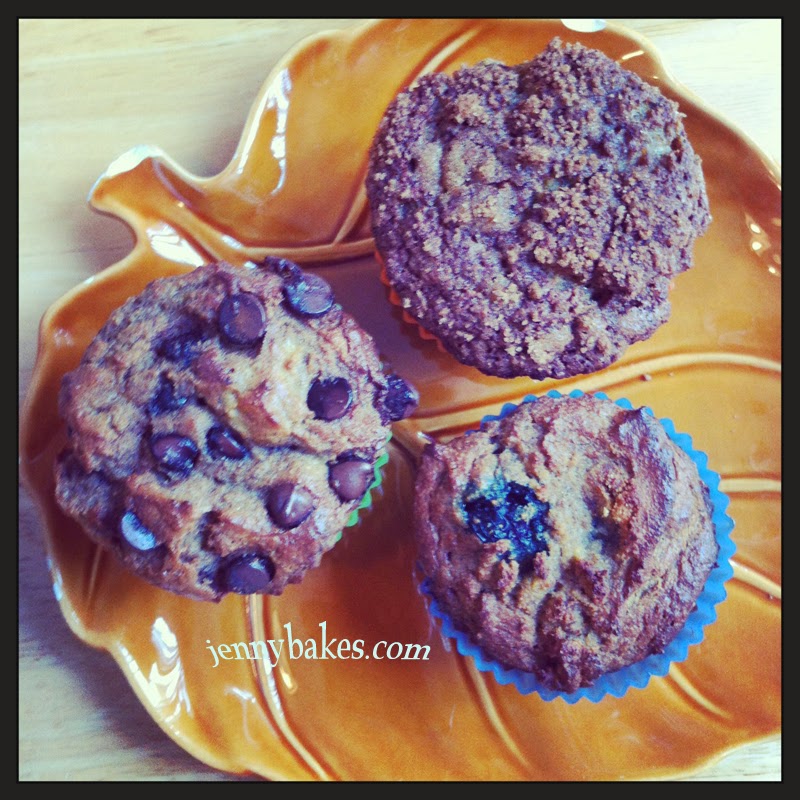 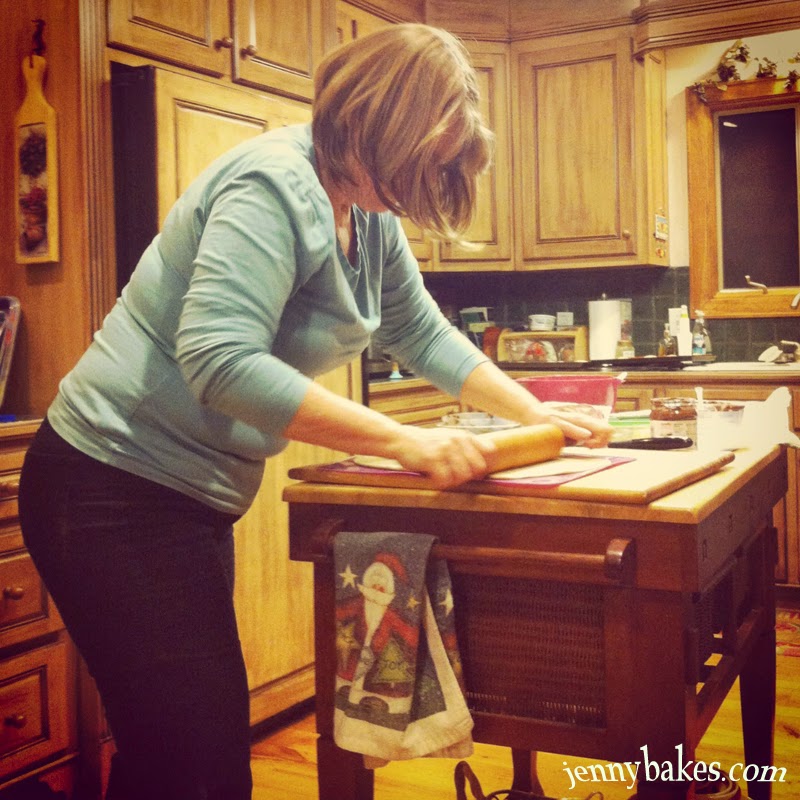 Earlier this year, a few co-workers planned a pop tart making party.  After work, we drove in a caravan over to B's home with pop tart fillings in tow.  Two people had made doughs to try, and we spent a few hours rolling out dough, filling it, baking the tarts, and tasting our concoctions. 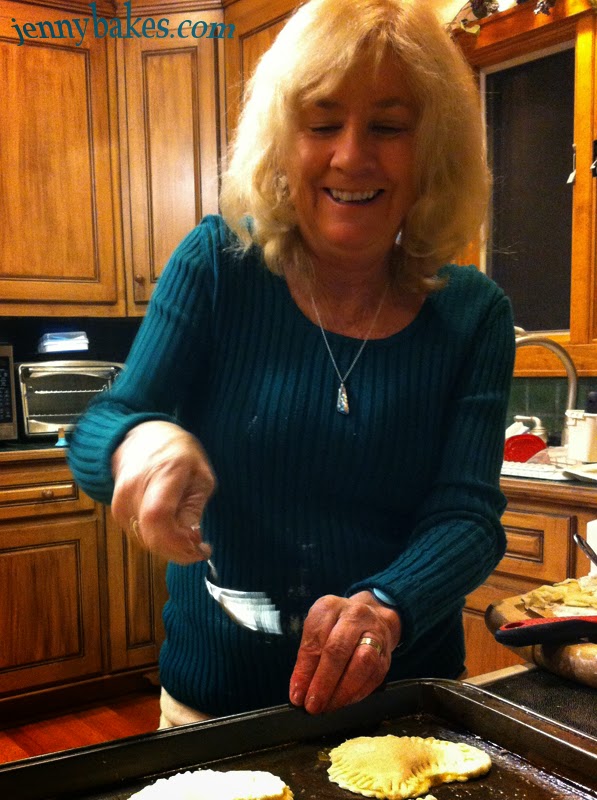 Some of the best fillings:
-Cinnamon sugar (recipe below)
-Prune (I based it on the apricot filling on this page but used prunes instead)
-Apricot jam
-Nutella

Some of the challenging fillings:
-Smores. Oh this sounds like SUCH a good idea right but the marshmallow burns out and leaves a gaping hole, or explodes through the dough (see below).
-Jam - in general unless it was a chunky jam (see above with apricot) more of it ended up on the cookie sheet than in the poptart.

You can find more ideas for fillings on this article about Bay Area Chefs. 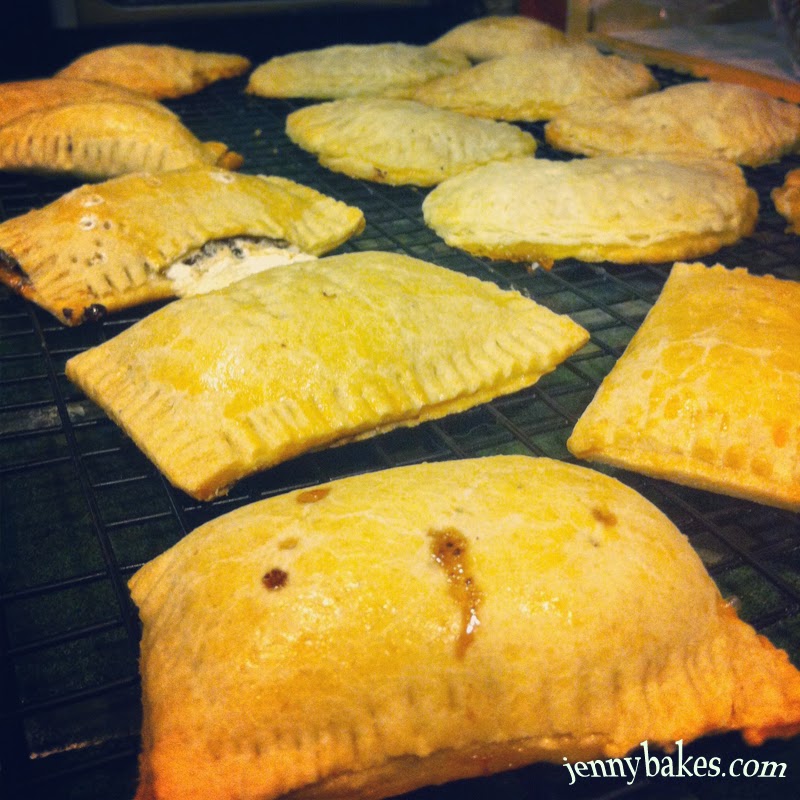 My favorite dough comes from King Arthur Flour, because it was so flaky (pictured above in the hearts in the upper right)!  We also had this filling on hand, and it was tasty although bakes pretty thin inside the dough.

Cinnamon Filling
1/2 cup (3 ¾ ounces) brown sugar
1 to 1 1/2 teaspoons ground cinnamon, to taste
4 teaspoons King Arthur Unbleached All-Purpose Flour
1 large egg, to brush on pastry before filling
Make the dough: Whisk together the flour, sugar, and salt. Work in the butter until the mixture holds together when you squeeze it, with pecan-sized lumps of butter still visible. Mix the egg and milk, and add it to the dough, mixing just until everything is cohesive.

Divide the dough in half; each half will weigh about 10 ounces (about 280g). Shape each half into a rough 3" x 5" rectangle, smoothing the edges. Roll out immediately; or wrap in plastic, and refrigerate for up to 2 days.

Make the filling: Whisk together the sugar, cinnamon, and flour.

Assemble the tarts: If the dough has been chilled, remove it from the refrigerator and allow it to soften and become workable, about 15 to 30 minutes. Place one piece on a lightly floured work surface, and roll it into a rectangle about 1/8" thick, large enough that you can trim it to an even 9" x 12". Laying a 9" x 13" pan atop the dough will give you an idea if you’ve rolled it large enough. Trim off the edges; place the scraps on a baking sheet, and set them aside, along with the 9" x 12" rectangle of dough.

Roll the second piece of dough just as you did the first. Press the edge of a ruler into the dough you’ve just rolled, to gently score it in thirds lengthwise and widthwise; you’ll see nine 3" x 4" rectangles.

Beat the egg, and brush it over the entire surface of the dough. Place a heaping tablespoon of filling into the center of each marked rectangle. Place the second sheet of dough atop the first, using your fingertips to press firmly around each pocket of jam, sealing the dough well on all sides. Press the tines of a fork all around the edge of the rectangle. Cut the dough evenly in between the filling mounds to make nine tarts. Press the cut edges with your fingers to seal, then press with a fork, to seal again.

Gently place the tarts on a lightly greased or parchment-lined baking sheet. Prick the top of each tart multiple times with a fork; you want to make sure steam can escape, or the tarts will become billowy pillows rather than flat toaster pastries. Refrigerate the tarts (they don’t need to be covered) for 30 minutes, while you preheat your oven to 350°F.

Sprinkle the dough trimmings with cinnamon-sugar; these have nothing to do with your toaster pastries, but it’s a shame to discard them, and they make a wonderful snack. While the tarts are chilling, bake these trimmings for 13 to 15 minutes, till they’re golden brown.

Remove the tarts form the fridge, and bake them for 25 to 35 minutes, until they’re a light golden brown. Remove them from the oven, and allow them to cool on the pan.
Yield: 9 tarts.
at 5:32 PM No comments: