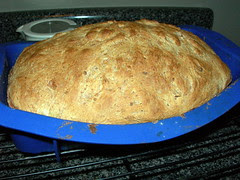 I should have quit while I was ahead. 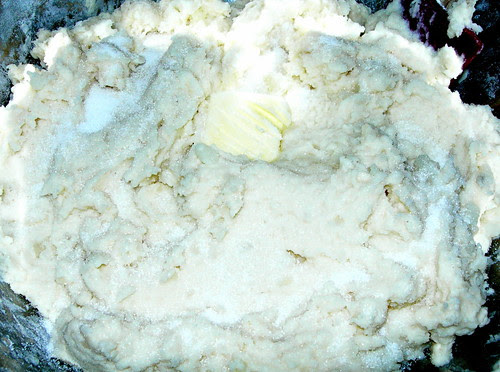 There were two puzzling parts to this recipe. The first involved potatoes. I guesstimated at ounces and ended up cooking three rather large russet potatoes. At this point in the recipe, where you add butter and salt, I was seriously considering just eating the mashed potatoes and calling it good. Perhaps I should have gone with that instinct. 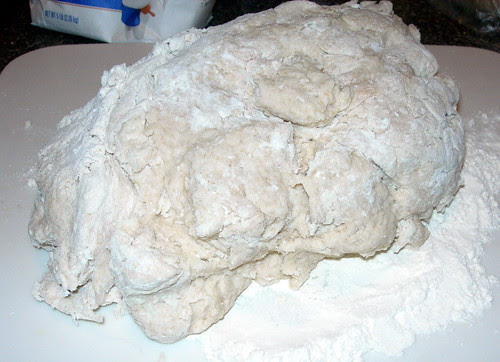 The instructions tell you to add 4 cups of white flour and 1 cup of whole wheat before putting on the board to knead. That is what the dough looked like at that point. It's supposed to suck up another 2 1/2 - 4 cups of flour through the kneading process, but the recipe also says the dough should be a "soft" dough. Not someone who bakes a lot of bread, I assumed soft really meant soft. I don't have a sense how much additional flour actually was added. 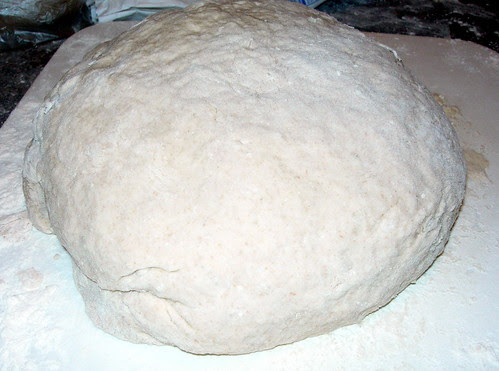 But here's the thing that stumps me - I have done enough baking to know what well kneaded dough is supposed to look like - a little puckery, holds an indent, and this is what that was! This is dough post-kneading but pre-rising. Yes, it was a little soft, but seemed a good texture. I put it aside to rise. 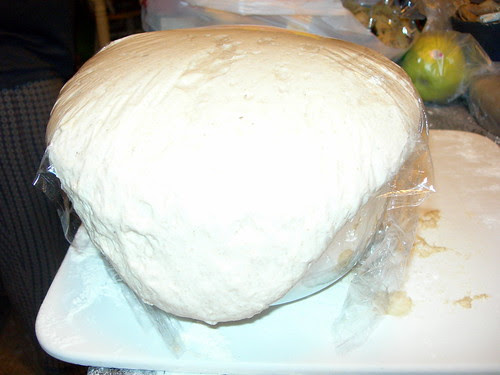 This picture is a reflection of how long I waited to do this challenge. I like to take pictures in daylight so I don't get these bright reflections, but by the time the dough had risen, the daylight was gone. Should have started sooner. But what is this beast rising out of the bowl? 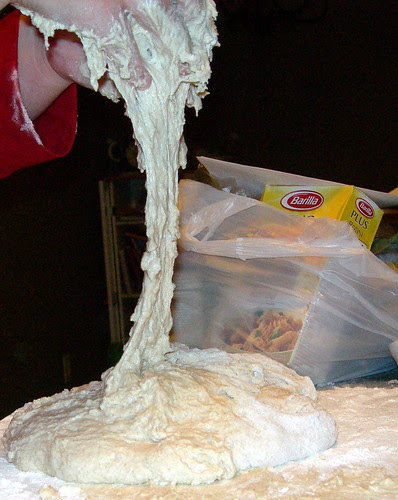 Here is where I began to suspect that this recipe might not be turning out the way I'd hoped. The dough that was formerly firm and tender became soupy and unmanageable. I didn't know what to do. So I bravely pushed on, forcing it across a cookie sheet for foccacia and into a bread pan for bread. 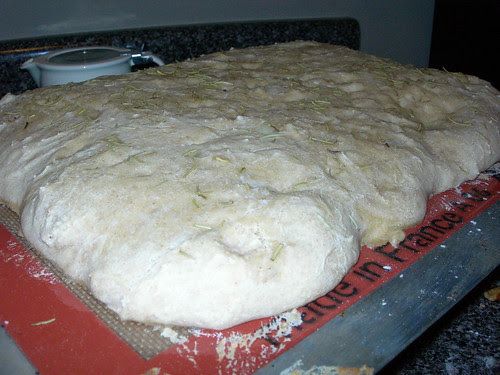 The bread (picture at top) held its shape better, but still had too much moisture to comfortably be called bread.

In the past, I have worked at a Daring Baker Challenge until I perfected it. This time, I'm just happy to be back baking at all, to be honest. I'm not sure this recipe is one I can feel confident in attempting again. To me, the unknowns (how much potato EXACTLY and what exactly is a "soft" dough) are too great to feel very confident. Next month I will start earlier so I can try the recipe more than once. Can't wait! 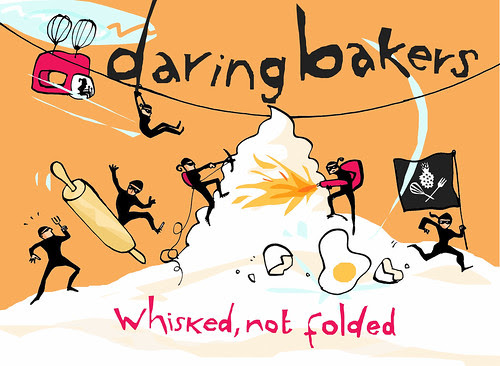 This recipe has been brought to you by the Daring Bakers, a group of now over 100 bakers across the world who attempt the same recipe in secret every month. To read other entries, please go to the Daring Bakers Blogroll. To see the original recipe, please visit this month's hostess's own blog, My Kitchen in Half Cups. Thanks for picking a savory recipe, Tanna. I hope to do future challenges more justice!

Glad you're feeling better! I've missed reading all about your kitchen endeavors! I hope to be back in the kitchen more when my semester is over. :)

What a great attempt after surgery and a busy holiday weekend. I am sure you must have been tired. I used a scale to weigh the mashed potatoes because I didn't want the advanced breadbaker's 16 ounces. I love the picture of your hand and the risen dough. That says it all. I hope you try it again. Wendy

Oh Jenny...I'm glad you are back in the kitchen and feeling better. Sorry you were ehrm....visited by the "blob". OH Well, that is what Daring Bakers is all about, trying something and then if it doesn't work out, know you can come back later and try it again!

Oh you should try it again. You just used WAY too much potato.
Glad to hear that you are back up and running(or baking I should say).

Glad you went ahead with the challenge despite the difficulties in handling the dough. I for one felt that this months challenge was the most difficult I've done so far :)

Great job on completing it! Hope you are feeling better.

Sorry the recipe didnt work out for you! It did look very promising at first! On the bright side, at least it didn't use loads of really, really expensive ingredients (if that's any consolation to you!).
Next time you'll do great!

Yeah, that approximation of 4 potatoes didn't cut it - unless they were *really really* small potatoes. My two russets totaled just under a pound. Definitely give it another try when you're up for it - it's worth the results.

-jen at use real butter

Oh, my!! I'm sorry it didn't work out for you! I'm glad you are feeling well, though.

That's what happened to me the first time, except my dough was never firm to begin with and I let it rise twice so I didn't have to deal with it. Once I baked it, it never baked really! But the second time was gold, so I say that, when you get the chance, you should definitely try it again.

Great job nonetheless, and I'm glad to hear the recovery from your surgery has gone well!

Christina ~ She Runs, She Eats

Glad to hear you are better! Sorry the bread was not up to your expectations. Hopefully you will have a better time next month!

Kudos to you for getting back into the kitchen and feeling better! Even though the recipe didn't work out exactly for you, I still think the bread looks good!

Well I am glad you are better after your surgery. I had the same surgery in 2001.

Yeah, just too much potato. But you did such a great job at taming that beast.

That is rather baffling, but it doesn't look bad! It looks like you have a lot of potato. Try it again! =) I bet you'll rock it the next time around!

You did a wonderful job on your bread and I'm glad you were able to get back to baking.

Jenny- glad you are feeling better and back in the kitchen!
Your Focaccia looks good!
I too experienced a sticky blob.
I'll try it again with the stand mixer-one of these days.
xoxo
Gabi

Glad to hear you were back in baking form! Your blob looks ready to go visit the blogging world. hehe

haha you make me laugh Jenny!

I'm glad you are back in the kitchen... and that you didn't succumb to the urge to consume the mashed potatoes. Though I suspect Peabody's right... you COULD have eaten some of them and still come out with a successful loaf. And I love your positive attitude... what matters is that your back to baking!