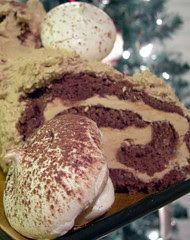 Yule Log 2007
Originally uploaded by watchjennybake.
I have wanted to make a Buche de Noel, or yule log cake, for several years now but never got around to it. When it came out as the Daring Bakers Challenge for December, I was excited, to say the least. I knew I had a tree trimming party to go to and planned to make it for that day. The day of the party, it was pouring down rain, the kind of day that makes you want to lock the door, make a pot of tea, and watch movies or read books all day long.

I was actually worried it was going to be "one of those days" when I went to the post office to send holiday gifts (the day after the deadline, of course), and then to the grocery store. The only thing I needed was parchment paper, and guess what I forgot? Which meant I was going BACK out in the rain to hunt down parchment paper - which by the way, in my town, neither Walgreens nor CVS deemed important enough to carry - so I didn't get started until around 1 pm. I don't mind having a disastrous baking day (see last month's Daring Bakers Challenge) but was desperate not to have this day be one of them. 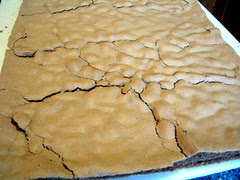 The first step is baking the genoise layer. I decided to do a chocolate version, and altered the recipe based on Nick Malgieri's suggestions on the old episode of Sara's Secrets (where he bakes this cake!). I watched that episode twice before I delved into this project. 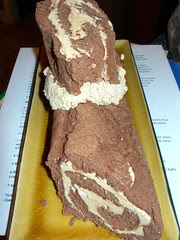 I slightly overbaked the cake, knowingly, because it told me to start on the buttercream once the cake was in the oven, but then I had egg whites whisking on the stove when the cake was over and I freaked out a little. So later on, the cake cracked when it rolled up, but it was still all good. 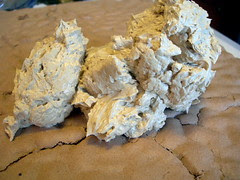 I was worried that my buttercream would break after reading some stories of the other Daring Bakers, but I had my fears put to rest by Nick Malgieri, who said once the mixture had cooled completely down in the mixer, you could just throw the softened butter in one stick at a time and beat it until it came together - so I did, and it was wonderfully creamy and SO delicious. This is not the buttercream you make by mixing powdered sugar and butter. I didn't have rum or brandy, so I used Kahlua, which really amped the coffee flavor in this. 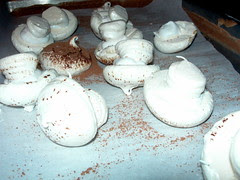 The mushrooms added the most mystery to the cake - a lot of people at the party thought they were "actual" mushrooms and I had to prove they weren't by cutting them apart. The cocoa powder applied before baking really added a touch of realism.

I didn't do much to decorate the cake other than add fork marks (after the pictures were taken, ha!). I was late to the party, it was pouring down rain, and I realized too late that I had no covered dish large enough to transport the cake. So I used the umbrella on the cake and ended up at the front door looking like a drowned rat, but the cake was dry! 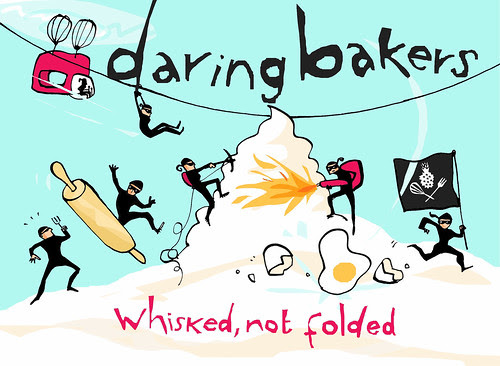 The recipe can be found on either blog of this month's challenge hosts - Ivonne and Lisa. All the Daring Bakers (I believe we're over 300 strong now) can be seen in the list here.

The fact that people at the party thought those were real mushrooms just attests to the great job you did on the meringues! Let's hope they didn't think the yule log was a real wooden log ;)

Oh no, I can just picture you trying to carry it with an umbrella in the other hand! Great job on your log.

Jenny, your cake looks amazing. My buttercream was more like butter slosh. very runny but I see I have something to strive for. Your looks so good!!! You have yourself a very merry little Christmas!!

A lot of people ,especially here in the US,dont care for genoise because its so dry.And its a **** to make IMO.All the buttercream and filling helps. Your log looks great.Happy Holidays.

Now that's putting your priorities in place - protect that cake and just get wet! I love it!
Nice work!

I guess that's why you are called daring bakers.

If you want a laugh, pop over to my blog to see the graham cracker houses.

The extents we Dbs will go to for a challenge even getting ourselves wet in a downpour but assuring the cake stays dry. Great one!!

Beautiful job! I'm glad you finally got to make the Yule Log. All the best to you in the year to come!

Your bûche de Noël looks wonderful. I'm impressed at your dedication and sacrifice that you rather be wet than the cake. :)

Have a great Christmas!

Now those are some realistic looking mushrooms! I thought I hated buttercream but this version is so smooth and silky, not buttery at all, far better than the powdered sugar, cream cheese, butter thing! Great job Jenny!

Kahlua in the icing sounds so yummy! I can completely imagine the timer for the cake going off while whipping egg whites over a hot water bath. I definitely would've freaked out too. I finished the cake before even starting on the buttercream though so thankfully didn't encounter that problem. I'm happy to see it all turned out well for you though. Looks great!

The log looks great and you saced it form the rain! Yippee!
Hope everybody liked it and that you had a great holiday!

Another baking Jen here! Great job on your yule log! :)

Oh, you're so lucky that you actually got to see Nick make it! Your mushrooms are so plump and cute and I think the log turned out great! Happy Holidays!

Wonderful tale and wonderful cake! I love the sound of the Kahlua! Yum!

What a *wonderful* way to spend a rainy day. (except the schlepping out for parchment part. And the drowning while you kept the cake dry part.) Great job! Hope your holiday season's delivered some joy and peace in addition to the rain, and that the new year brings health and happiness, laughter and love.

I wish I would have seen that episode, but by the time I found out about it, it had already aired. Oh well!! You did a wonderful job!!

Your cake looks great. What a compliment to have your mushrooms thought of as real! You braved the rain and made a great cake. Wendy

Awesome! Great job on your challenge and I applaud your resourcefulness with the ziploc - works great in a pinch :) I think you can count this as a success!! Happy new year :)


jen at use real butter

You're clearly a Baker At Heart when you choose to save the cake over yourself. Ah, what we sacrifice for our art! Congratulations on your Buche -- it looks luscious -- and especially on your trompe de l'oeil mushrooms.