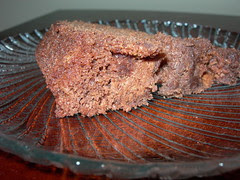 Chocolate Cinnamon Bread
Originally uploaded by watchjennybake.
You know it has been a completely crazy week when it is Friday before I realize I never posted in what is supposed to be a weekly Monday blog! Winter Term at the university where I work is the craziest time, and the music library has been hopping.

Since I waited, I'm posting about something I made later in the week. I had a new co-worker start this week, and where I work, we have "Welcome Breaks" where people bring food, hooray. I actually made this recipe Christmas Eve (AKA Hubby's birthday) morning, but didn't photograph it then, so I repeated it for this celebration.

The recipe is Chocolate Cinnamon Bread, and I know it has been making the rounds on the baking blogs. I first read about it on Taste and Tell, another one of the Daring Bakers blogs. I will let you go to her post for the recipe, and to see a picture of how it should look if you follow the recipe exactly.

The first time I made it I did the spice mixture and sprinkled the bottom of the pans I used with it, but I used these silicone flower mini cake pans and everything stuck despite using non-stick spray. (This is why there is no photo from Christmas Eve!). I also had been out of cinnamon that day, so it was more of a chocolate spice (cardamom, ginger, and clove) bread.

This time around I actually didn't have enough cocoa powder, so used only 3/4 cup and added an additional 1/3 cup flour. I also used a bundt pan instead of two loaf pans because I wanted it to serve more people. I took it out of the oven when the top was brown, even though I wasn't convinced it was completely cooked, but the texture seemed okay when it was cut into the next morning.

That's why the picture isn't great - I cut a quick slice and snapped a photo on the entertainment center before jumping in the car to go to work! Crazy week, simple recipe, delicious fun!

Now I'm craving a slice of this bread again!!

Interesting combination. I wonder how it taste like :) ... simply delicious without a doubt.