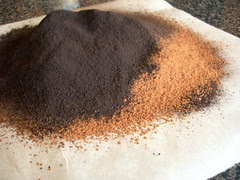 Cocoa powders
Originally uploaded by watchjennybake.
It started around Christmas time, when a friend sent me a gift card for King Arthur Flour, and told me I absolutely had to try the black cocoa. I had never heard of it, so I bought a pound to play around with. Since then I've heard this is what makes Oreos so black, but don't quote me on that one.

I actually used it a couple of weeks ago in my Hi Hat Cupcakes because I was out of regular cocoa powder, but it wasn't as intentional as I wanted to be.

I wanted to make at least one recipe that I had made before with regular cocoa powder, so I could compare them. Enter Alton Brown's Cocoa Brownie Recipe, one I find myself making more than any other brownie recipe, I think because it only calls for cocoa powder and not baking chocolate, which I can't seem to keep around the house. But with 1 1/4 cups cocoa powder, surely using black cocoa would make a significant difference!

I followed Alton's recipe, merely substituting black cocoa for half the cocoa powder when it was sifted. Alton Brown's cocoa brownie recipe has been blogged multiple times, so please check the results at the Food Blog Search if you want to see the original. 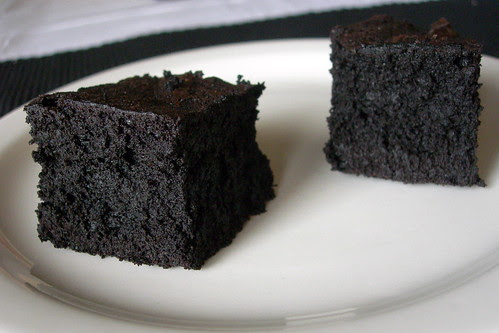 Preheat the oven to 300º. Butter and flour an 8-inch square pan. In a mixer fitted with a whisk attachment, beat the eggs at medium speed until fluffy and light yellow. Add both sugars. Add remaining ingredients, and mix to combine. Pour the batter into a greased and floured 8-inch square pan and bake for 45 minutes. Check for doneness with the tried-and-true toothpick method: a toothpick inserted into the center of the pan should come out clean. When it's done, remove to a rack to cool. Resist the temptation to cut into it until it's mostly cool.

The result are dark chocolate brownies that are tender, chewy, and reminiscent of Oreo cookies. My students devoured them this afternoon.

A pound of cocoa is quite a bit, so I still had a bunch to try. I remembered Gale Gand making a cake with Wayne Harley Brachman back when she had a show on the Food Network, and knew the Brooklyn Blackout Cake was a prime candidate for trying out more black cocoa. 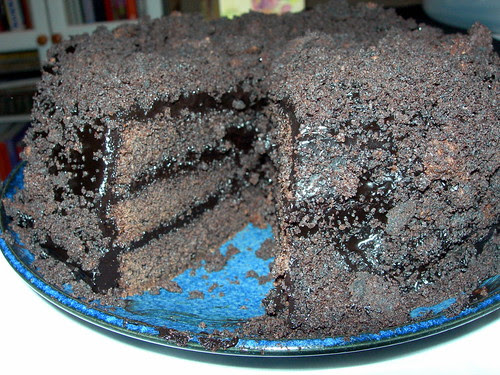 Throughout the recipe, any time cocoa was called for, I merely substituted half black cocoa for regular. This recipe is usually called a blackout cake because you turn 1/4 of the baked cake layers into crumbs, and they go on the custard that is spread on the outside. It was almost unnecessary to do this with the blackness of both the cake and custard, but I still did it for the effect. 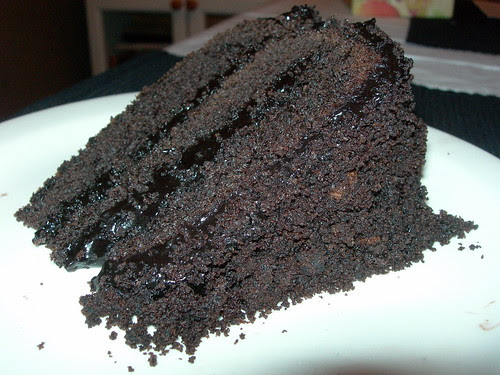 I'm not sure this recipe was as successful as the brownies in taste and texture. To me, the extra crumbs on the outside give it the mouthfeel of being dry when it actually isn't. You haven't really lived, however, until you have stirred a bubbling pot of black chocolate custard on the stove - it just makes the entire baking experience surreal to make black colored things.

The last thing I am dying to do is to make a dark hot chocolate. I'll keep you posted!

My wife and I made black brownies tonight, too, right before you posted this. Delicious! Our recipe is similar to Alton Brown's.

That is some seriously dark chocolate! Looks so cool.

Oh lord, I need to go find some chocolate STAT. I agree with Courtney that the cake looks surreal!

Wow...I've never seen brownies or a dark chocolate cake THAT dark and chocolatey. Love it!

Black cocoa is pretty cool. I'd never heard of it before. I love the color! And I'd love one of those brownies!

I can't believe how black it really is! What a fun ingredient to play with!

I love the look of the black custard frosting. I just think how cool it would look on a white or yellow cake! Did you think the black cocoa tasted different or just looked different?

Oh wow...I've never heard of that cocoa before. Sure looks yummy!!!!

How To Eat A Cupcake said...

How fascinating. I've never heard of black cocoa before. Those brownies look like seriously dark, like lumps of coal. I'm sure they tasted fabulous though. Is there any difference in flavour compared to normal cocoa powder?