The Curse of the Pumpkin Cheesecake 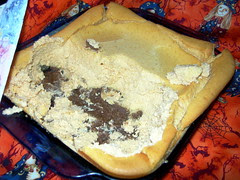 The Curse of the Pumpkin Cheesecake
Originally uploaded by watchjennybake.
I have had some days where baking just does not go well. (See potato bread day for a clear example!). The subject of this blog, however, is a recipe that appears to be cursed.

Back when I worked at the Almost Home Tearoom making desserts, this pumpkin cheesecake was a seasonal favorite. I loved it for its lightness and interesting flavor combination - most pumpkin cheesecakes tend to be heavy and pretty solidly pumpkin in flavor.

It is still those things, but something happens in its production each time I make it outside of the restaurant. The first time, as soon as it cooled i managed to get half of it to fall off the springform pan bottom onto the floor - that was a Thanksgiving where I was eating with friends, so I shrugged and brought the safe half with me.

This year we were having a Halloween party at work, and I decided to bring the pumpkin cheesecake. I had everything mixed up when I realized I had no idea where my springform pan went. I don't think I've seen it since moving, but it was too late to want to go to the store. I decided to cook the cheesecake in a few ramekins and a 9" square pan, but that meant it didn't cook as evenly (you should have seen the cracks in the finished version) and the lovely maple sour cream layer never got added. 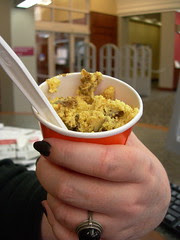 The funny thing about this cheesecake, it doesn't matter how bad it looks, people seem to like it anyway. One co-worker was working at the reference desk, and rather than attempting to bring her a slice of cheesecake, she got a cup-o-cheesecake. This is a closeup of it, held by witchy hands (Halloween everyone), so you can see how very light in color it is. The crust is a delicious gingersnap concoction that goes very well with the pumpkin.

I'm curious to know if it is just me who has this curse with this recipe, or if the recipe itself is cursed. If you try it, let me know what you find out!

Bake at 425 degrees for 10 minutes, and then remove from the oven.

Pour into crust. Bake at 325 for 45 minutes. Turn off oven but do not open door for one hour.

Spread over cheesecake. Bake at 425 degrees for 10 minutes. Cool one hour.

Chill 3 hours and remove from pan.

*We always used all gingersnaps, but at least half.
**I have substituted pecans before for this, but almond is good.
***Don't leave this out - it really adds a very interesting flavor depth to this recipe.
at 10:45 PM

Sounds like a delicious recipe! Hopefully next times the charm!

It looks good if you ask me. Maybe you can just leave it like how it comes out and let that be an inventive recipe. Let it be intended to look like that. Hey as long as it tastes good.

By the way I have a special award for you at my blog, come and check it out.

mmm, i think you made this when i came to visit for thanksgiving. and you were mad it cracked, but it was tasty! :)

I can tell that the cheesecake actually looks really fluffy. I'll have to try this.

I was just over on the SBS forums and saw some posts you made. Thought I would come by and say HI! Long time no "talk".

This recipe looks really good. We have been eating a really yummy crustless low carb cheesecake this fall. (and no, I didn't cook it, some things never change lol)

Anyways, I hope to re-connect with you at some point. Lots of things have changed since I sold the tea biz! he he you won't believe how much closer I live to you now. :)

Write me when / if you have the chance!
racoo. smith at gmail.com