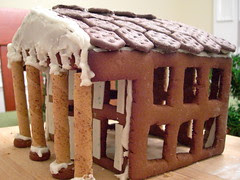 Side view
Originally uploaded by watchjennybake.
The December 2009 Daring Bakers’ challenge was brought to you by Anna of Very Small Anna and Y of Lemonpi. They chose to challenge Daring Bakers’ everywhere to bake and assemble a gingerbread house from scratch. They chose recipes from Good Housekeeping and from The Great Scandinavian Baking Book as the challenge recipes.

I was excited to see this challenge, because I have never made a gingerbread house. I live less than an hour from Asheville, North Carolina, and often go up to see the winners of the National Gingerbread House Competition at the Grove Park Inn. I knew nothing I could do in my first attempt would even come close to what I see there, so I decided as long as I completed the challenge and learned something, that would be enough this time around. 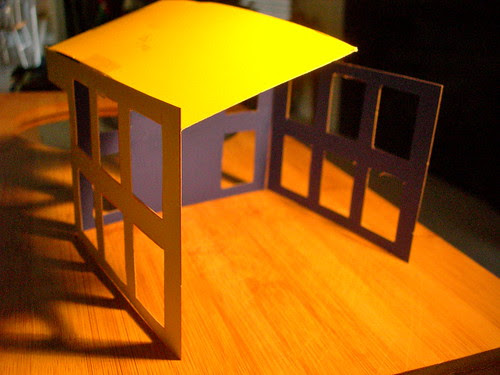 The hardest thing to figure out was what kind of gingerbread house I wanted to make! I sketched several ideas - a lighthouse, a birdhouse, a dog house, but wasn't crazy about any of them. For a while I thought I'd make the basic shape and call it good but that made me feel boring.

I turned to The Gingerbread Architect by Susan Matheson for help. It is a great how-to book with templates and suggestions for decorations. I took the Greek revival antebellum plantation home idea and made it at half the scale. This meant finding different solutions for the columns, since the peppermint candy towers would have been huge. 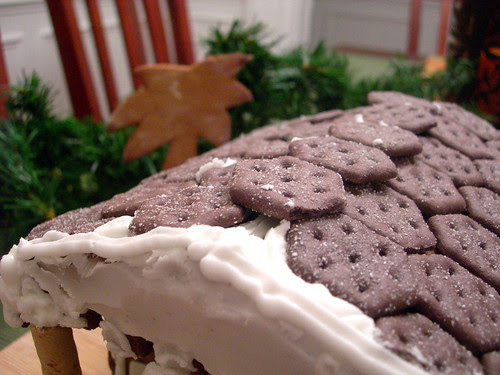 I still went with her suggestions for the shutters (gum, although I accidentally picked a gum that only had green specks, not solid green color) and the roof (Oreo crisps), but went with chocolate hazelnut pirouette cookies for the columns, which sat on top of little rounds I cut out. I didn't make the gum porch, ice the entire sides, or make gum windows as suggested. Partly because I was running short on time, and partly because my reduction in scale made elaborate work more difficult. 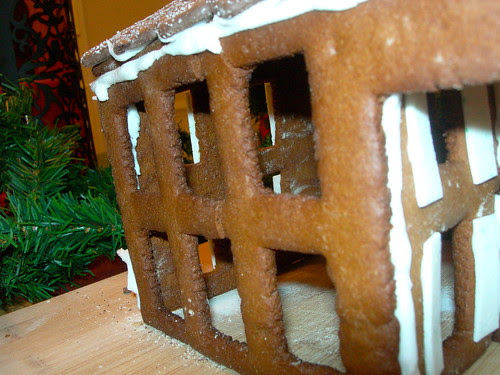 I struggled with the recipes given to us for the challenge - the first gingerbread recipe I made came from the hosts but was infinitely dry even after chilling 2 days. I made some test pieces with it but they cracked, so my second recipe came from the book that I used the template from. The royal icing was equally overdry and I had to start over. Even with 1/2 cup less sugar, it was difficult to work with. Most of what I learned had to do with consistency, and I would have loved a thinner icing to do more elaborate design work on the sides with. I also rolled the first quarter of the dough out to thin. I remade one of the sides but the one I left as is broke in three places as I assembled the house. That was just another instance of when I should have followed my instincts instead of rushing through because I'd procrastinated again! 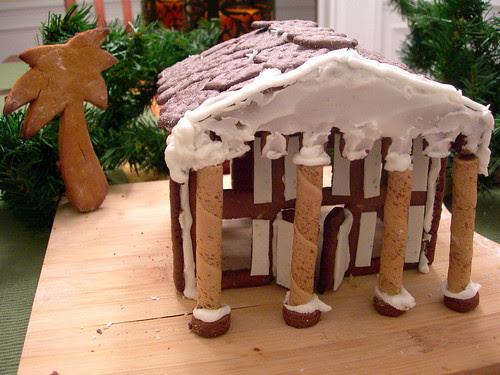 I hope everyone has a marvelous new year! Happy holidays from JennyBakes.

Wow, that is some serious architecture and you did a great job on it! :)

I love your fine art.you did a awesome job..

very open design. i'm impressed you got it together without anything breaking with so many and such big windows.

Just look at that. You then must be the Goddess of Ginger bread houses! Gotta love those pilars!! GREAT.

Happy Holidays to you! I love how you tried to do something different with your house. I don't think I would've had the confidence to attempt anything other than basic 4 walls, let alone columns!

wow! i am impressed this is a masterpiece! lovely!

Angela @ A Spoonful of Sugar said...

This is amazing, Jenny! I love the Grecian columns and how palatial the whole house looks. Great job!!!

That is quite the gingerbread house! Congrats to you for the success of your complicated design ; )

Your house is awesome! I really admire you for doing a design with so much negative space - I'm always afraid to have so many little holes and thin supports! Eep!

What an undertaking, but you did it! Kudos to you for meeting a great challenge! happy New Year!

Your Gingerbread House is one of most unique architectural designs I've seen. Very creative! If you don't mind I'd love to link our Foodista readers to your post. Just add your choice of widget to this post and you're all set!

Very nice! How fun that you go to Asheville regularly - I just watched a show about it on Food Network the other day.

I love the pillars. Great work! Have a fantastic New Year!

What an ambitious project for a first gingerbread house. I love the columns!

Jenny, your creation is beautiful! For future reference, the royal icing can always be thinned with few drops or water or lemon juice. I think that the dough had too much flour that's why it came out too dry.

Oh Jenny, you really turned out a beautiful gingerbread house, and such a creative one at that with the greek plantation home! Love that you used your new gingerbread book for inspriration, tips and templates, as it definitely paid off. Have a wonderful New Year, chicky!

What a terrific house - I love the columns and the detail work. So timely - the book on architecture!

Wow, I can't believe I missed your gingerbread house, it's amazing! Well done