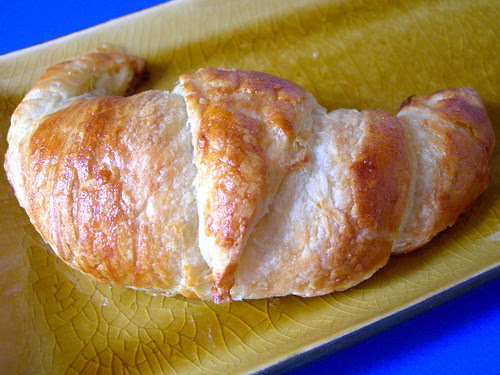 In January, I made some culinary resolutions for 2010, and I haven't done much with them. I decided this was the weekend I'd make my third laminate dough - croissants! It is a 2-3 day process, so I started Friday night and finished today at noonish. I used the recipe from Baking with Julia, because that has been my primary resource for my other pastry endeavors, including puff pastry and danish pastries. It made sense to go ahead and make the triumvirate! 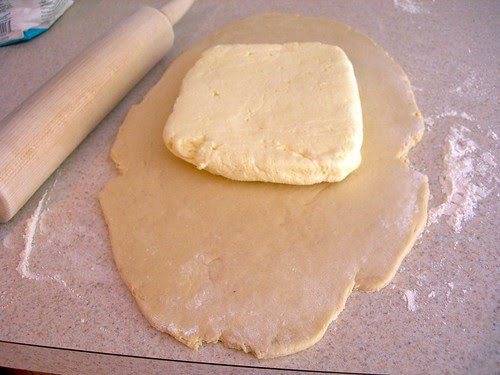 If you follow me in Twitter, you have read about my journey. Rather than post a photo of it, I'll link to each step. There are many. First I made a yeasted dough and prepared a butter layer (over a pound), and chilled them separately overnight. The incorporation of the dough and butter are what make croissants a laminate dough, since the process creates the many layers that we look for when we bite into a flaky croissant. At first, you literally fold the dough around the butter and roll it out. Between each roll and fold (or, a "turn,") the dough has to be chilled for two hours or so, because it needs to stay cold. Otherwise it could get greasy and unpleasant. I did all the turning and rolling out on the second day.

After all the turns, the dough gets a final double fold, sometimes known as a wallet fold, before its last rest. At this point I wrapped it up and put it in the fridge overnight. Croissants, at least this recipe, are a bit troublesome if you are trying to make them fresh for breakfast, because the completed pastries have to sit for four hours at room temperature before baking. Rather than get up super early on a lazy weekend, we decided that croissants would be just as good at lunch. I do wonder if I could have made the croissants and then put them in the fridge overnight.

The third day, the dough was sufficiently chilled and was ready to be rolled out. I cut it in half like the recipe recommended, and rolled it out to 24x14 (ish). Making croissants would be a great arm workout, actually, if you didn't eat the final product. I had decided that half the dough would be made into standard croissants, and the other half would become pain au chocolat. The first half was rolled out thin, folded in half, and cut into triangles. The scraps get incorporated into the croissants too, so nothing is wasted. The dough is then unfolded and the triangles and diamonds are cut in half, so the half batch of dough yields about 12-14 croissants.

The most difficult stretch was stretching the dough. The recipe said to be firm and really grasp it, but when I did I tore through. I used more of a pizza dough technique where I pulled gently and used my knuckles to slowly stretch the dough. The goal was to stretch it to twice its length, which I tried to do but didn't always manage. Then a bit of the scrap dough gets added before rolling the croissant, to add some plumpness to it when it bakes and give it that croissant shape. The croissants are left to rest uncovered, after being washed with an egg wash, for about 4 hours. 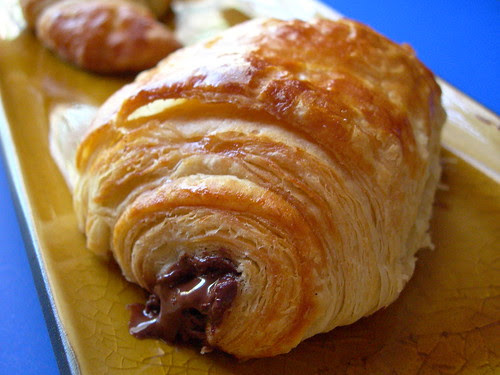 The other half of the dough was formed into pain au chocolat, which is a little easier than croissants, because you don't have to do any dough stretching. You simply roll out the dough to the same thinness, cut it into strips, and wrap each one around a piece of chocolate the same width of the dough. I used Maya Gold chocolate from Green & Black's because it is organic and I thought the citrus and spices would be a little surprise from the typical chocolate croissant. Plus, all G&B chocolate has a pattern of thin strips, making it easy to break into the perfect size for pain au chocolat. I used bittersweet for half of them, which I think is a little too dark for this pastry, even though I read it was the classic chocolate to use.

The verdict? Amazing. The recipe was perfect, the croissants had that crunch that is so often missing from commercial products (because they are not using butter!), and it was worth all the effort. We had a few with brie for lunch today, and look forward to munching on and sharing the rest.

That's the recipe my mom and I use! We've found that it's a great recipe, though the dough can be finicky depending on temperature. We usually make a double batch every year for Easter brunch. They start off well enough, but if the house cools down too much at night, we've had issues with the dough rising (we won't discuss the year my mom wasn't thinking and tried to let them rise in the garage...big mistake!). We've also had issues with the final step--usually we have the oven going with other things by that time, so if the kitchen gets too hot, we have issues with stretching the dough. Never tried making filled ones, they look heavenly!

Oh also, while I agree that no commercial product can match homemade, the Williams Sonoma ones come closest. They're not bad and they freeze well.

Wow, that pastry looks amazing, those delicate layers, so fat and crispy... I'm drolling all over my keyboard! This is a must try for me! Thanks for the recipe! Do I need to reserve an afternoon for this or are they a quicker recipe?

@Lynnie - You might be able to do it all in one very long day, but with all the required chill and proof times, you need at least 14 hours.

These look so delicious. You are incredibly talented.

Jenny this really do look amazing! I'll take one of the chocolate ones please!