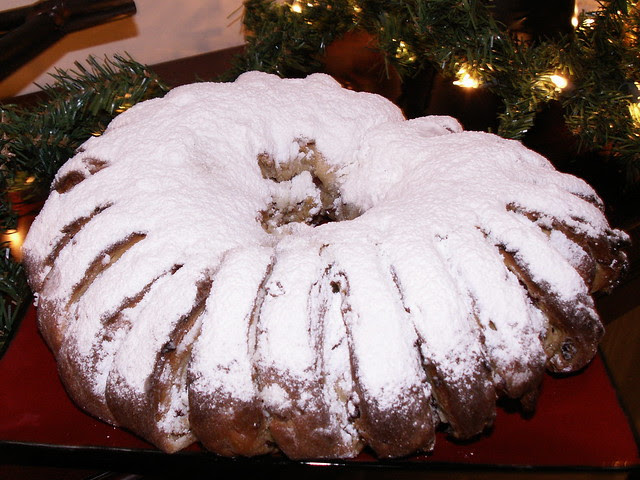 The 2010 December Daring Bakers’ challenge was hosted by Penny of Sweet Sadie’s Baking. She chose to challenge Daring Bakers’ to make Stollen. She adapted a friend’s family recipe and combined it with information from friends, techniques from Peter Reinhart’s book.........and Martha Stewart’s demonstration.

I enjoyed this challenge! I knew I would need to bake this for people other than the man I married, who refuses to eat fruit in bread. Haha! Luckily my work holiday party was last Friday, so I planned to bring a stollen wreath as my contribution (we do potlucks or pitch-ins now, which works great because we have a lot of great cooks in the library!). 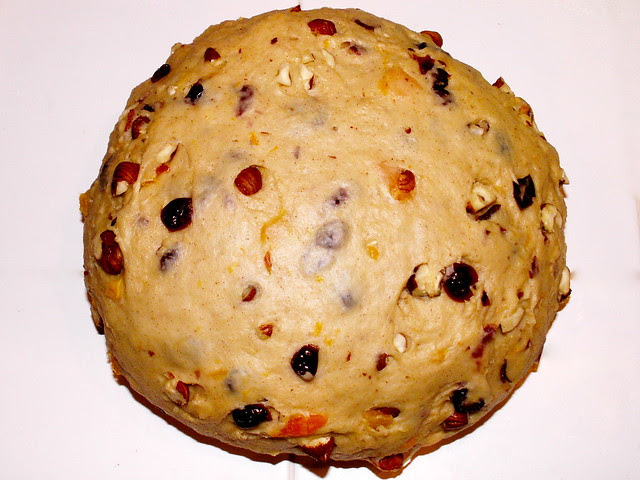 I'm still not a master of yeast breads, but I really enjoyed working with this dough. It had a great feel to it, and I kneaded it by hand. I recently spent $150 getting my KitchenAid repaired and I'm too nervous to have it do any heavy labor. That's okay, because I actually enjoy kneading the dough, and I think I get a better sense of when it is ready when I'm touching it.

The major change I made with the recipe was simply in what fruits I used. I substituted dried cranberries for the raisins, and used dried apricots rather than citrus, although I kept the orange zest in the recipe. I also didn't have rum, so I soaked the fruit in a mixture of Grand Marnier, orange juice, vanilla extract, and almond extract. I also used Oregon hazelnuts, roughly chopped, because I have a bunch to use and I love their flavor! 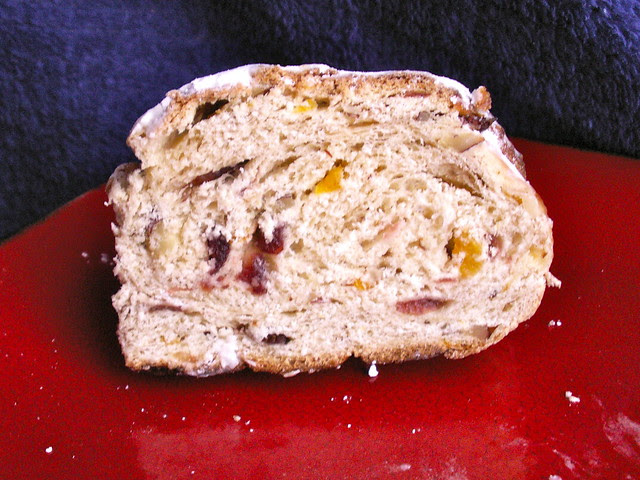 The picture of the slice is a bit blurry, because I'm still getting used to a new camera. I loved the tenderness of the stollen, and how it could have so much flavor while still being dense and rich. I snagged a bit of the leftover to take home to play with, and it was great toasted! 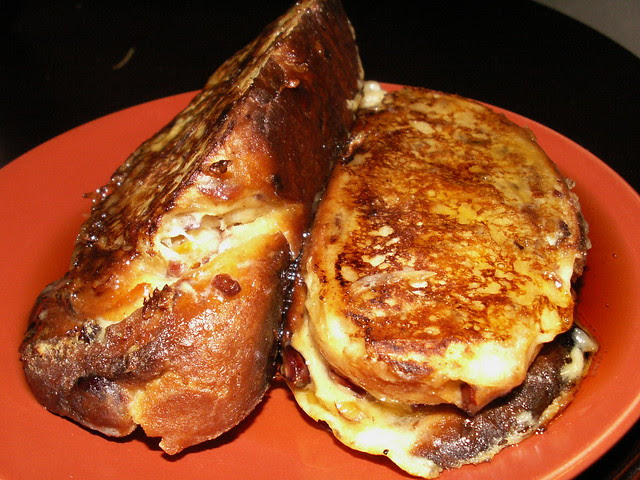 Then someone in the Daring Kitchen forums mentioned that they were going to make french toast, and I thought that was a great idea! I'm a fan of using what I have on hand, so my custard was made from eggs and Silk nog that I needed to use up, and it made my fruity stollen into amazing french toast!

I talked Nathaniel into trying a bite. I thought it was so delicious, not dried out like some store-bought stollen I've tried, that surely the fruit would be secondary to the sheer beauty of the stollen I had made. Hahaha. He looked like he wanted to scrape his tongue off.

I wanted him to have a good experience with it, and had an idea about infusing extra flavor into the dough during the milk scalding stage, so I pledged to make a version without any fruit or nuts. I also read a bit more in The Bread Baker's Apprentice, and Peter Reinhart pointed out that the formula for stollen dough is almost identical to that of panettone, meaning you should be able to use the doughs interchangeably in the various shape options. This sparked another idea, of making little individual panettone with my new dough. 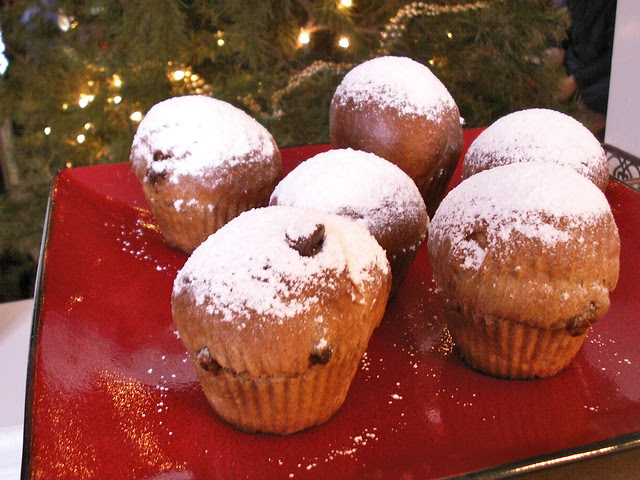 While the milk heated, I added a cinnamon stick, and also added some instant coffee to it before it cooled down. I added about 1/3 cup of chocolate chips and cinnamon chips to the dough while I kneaded it, and these all melted and made ribbons of darkness in the dough. I added an additional 1/3 cup of the chips to the various portions of dough before forming it. I made half into mini-panettone (using Reinhart's idea of just putting them in a muffin tin), and the other half into one typical stollen loaf.

Oh how I wish it had turned out! The coffee and cinnamon were pretty much in the background, and except for in the bites containing chocolate, the dough lacked the richness and moistness of my first stollen. I should have found a way to compensate for the alcohol-soaked fruit. I could tell the dough was too dry, but in my head this translated to it not needing to bake as long. Bummer.

Well done with the challenge Jenny, and I am thrilled to see your stollen looks as large as mine...LOL! Glad you have someplace to take it. I do love the idea of the pannetone ...wish I'd thought of that! Mmmm

Awesome stollen! We'd thought to make some, but ran out of time. Perhaps for the new year....

Beautiful! I've got some leftovers slated for french toast... after seeing that photo, I can't wait! :)

Your Stollen looks yummy and what a great idea to make the french toast!

Beautiful stollen! It sounds and looks delicious (the texture is perfect) and the photo of your french toast made my eyes pop out. Yum! Hungry now...

I'm with your tongue-scraping husband on this one. Stollen is fruitcake by any other name, and is the scourge of the earth.
That said, my husband wants me to do this challenge again for Christmas next year.
I. Think. Not.
:~)

Lovely stollen! I just saw pannetone french toast on another blog and was thinking how good it would be with stollen. Glad to know it works well! Also, those mini ones are so cute!! Too bad they didn't taste as good, but I'm sure they were still yummy.

I love your stollen!!!
Mostly the mini ones!
Great idea to make a stollen french toast!

That is certainly a huge stollen! I kneaded mine by hand too, very good for getting rid of pent up aggression :) Pity the coffee/choc one didn't taste as planned, they look so cute as muffins.

Your stollen looks great! I used my kitchen aid to knead the dough, but after reading about your expensive repair bill I will think twice. I love my kitchen aid almost as much as a small child :-) I have 3 slices still left... French toast for New Year's Eve breakfast? Great job on the challenge!