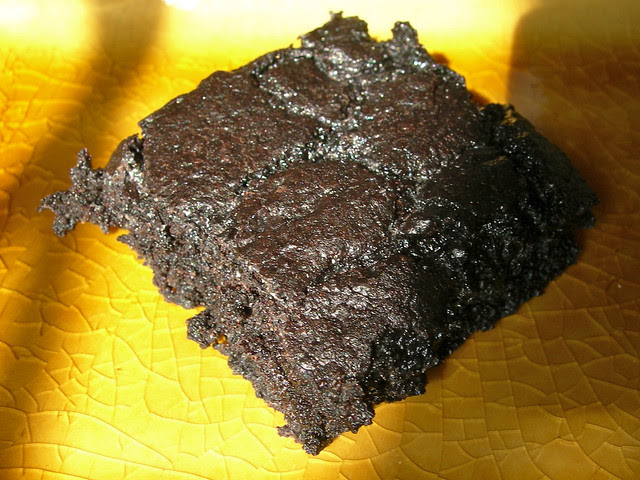 I was pretty sure I had already blogged these Cocoa Brownies from Smitten Kitchen, but apparently not. I don't know, maybe I was thinking I am always posting about my experiments with her recipes and felt silly doing another one. I'm not sure! Then I went on vacation, blah blah blah.

Seriously, everyone knows that I'm a huge Dorie Greenspan fan (made her blueberry crumb cake again this weekend, so delicious), but I seriously think Deb from Smitten Kitchen could easily influence all of us as much. Her blog just makes you want to cook and bake and eat!

My local grocery store, which I prefer first because it is closest to my home but second because everyone who works there is friendly and efficient, seems to only be stocking Special Dark cocoa powder these days. I really must speak to them about this, because while it would be nice as an option, it is not "normal" cocoa powder! I had a little deja vu while making this recipe, since the last time I made a cocoa brownie recipe was when I was experimenting with black cocoa powder. That time, I was using Alton Brown's cocoa brownie recipe. Both are great, but they are really different. Alton's is cakey, and depends on a long beating of eggs at the beginning of the recipe. Deb's only uses two eggs, and very little flour, and I'm not sure they even fully set up until I'd put them in the fridge for a few hours. We just kept them there, because they were so delicious cold, besides being fudgy chewy deliciousness.

Stay tuned for more posts - I'm trying out some recipes from some new cookbooks in the next few days, and have pâte brisée chilling in the fridge....
at 10:30 AM

Yep - Smitten Kitchen is awesome! And, no, dutch process cocoa is certainly different than "natural" cocoa powder. I've never seen "black" cocoa powder, though. Hmm. Will have to look into it.

I got mine from King Arthur Flour, but I don't know what kind of options you have in the UK. Let me know if you want to do some kind of rare ingredient swap. :)