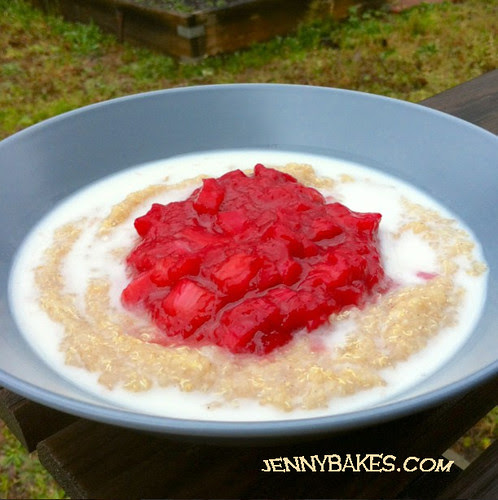 You can buy quinoa flakes at most higher end grocery stores.  They are a great, higher-protein substitute for breakfast cereals such as Cream of Wheat or oatmeal.  It is tasty with additions such as cinnamon, something sweet, milk, and nuts.  To really dress it up, try making rabarbaragrautur (an Icelandic word), or as we say in English - stewed rhubarb.

Rhubarb is not something I grew up eating, but truly love it.  It came as early as usual in the south this year, but since everything else started so late, I never got anything with a strawberry-rhubarb combination.  I thought some of the rest of you in more temperate states might just be seeing rhubarb in the markets.

I don't really have a recipe for you as much as an idea.  Cook the quinoa as directed on the package.  Slice the rhubarb after cleaning, and cook with sugar or sweetener and some water until soft and slightly syrupy, like above.  Top the quinoa with the rhubarb and milk.  I could eat this every day and never get tired of it.