Last year I tried recipes from Oceania, and this year I'm going to be lingering in Africa. This coincides with my reading projects, since I'm trying to finish reading (at least) one book from every country in Africa in 2016. This month I have been in South Sudan and Uganda. Sudanese cuisine is interesting because it shifts when you move into South Sudan, from the Arabic influenced cuisine that is most similar to Egypt to more of an East African cuisine like in Ethiopia and other neighbors. Kisra seems to be most like injera (from Ethiopia) and can simultaneously be a utensil and a bread.  It is not as pliable as injera, although I was not cooking it as thin or wide as is typically found in Sudan. You can read more about how it is traditionally prepared several places on the internet; I could only do what I could in my kitchen.

Luckily I had sorghum flour on hand from one of the gluten-free recipes I make frequently - pumpkin chocolate chip bread, which has a combination of three flours. These crepes (at least in the recipe I used) are not gluten-free, as the recipe maker thought using some all purpose flour helped them stick together better. Traditionally I believe they are made entirely of sorghum flour, but even with this adaptation, I had a hard time not having the crepes come out of the pan in pieces. 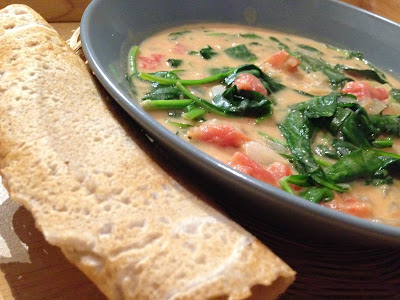 Plan ahead for this one - the batter must sit at room temperature at least 12 hours! I used the recipe from Global Table Adventure, and also made the stew she recommended alongside it, without the beef. I wish I had put another type of protein, maybe beans, because it was much thinner without the meat, and could only be eaten with a spoon.

Makes at least 8 (depending how big you make them).

Ingredients:
2 cups sorghum flour
1 1/2 cups water, plus 1 cup, or as needed
1 cup all purpose flour
unroasted sesame see oil (I used vegetable because I could only find toasted sesame)

I am gluten free. What flour can I substitute for the white flour?

Elaine, you may try making them with all sorghum flour but it will be harder to cook it, as the gluten binds together. Sometimes tapioca flour can help this issue, but it isn't a 1-1 replacement. I would use all sorghum flour plus maybe 1/2 cup tapioca?