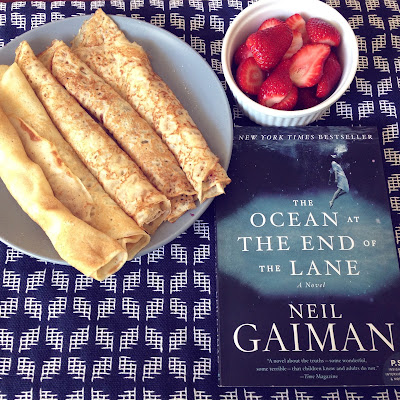 This is very similar to the "recipe" my dad uses when he makes crepes for us:
2-3 eggs
1 c milk
1 c flour
1 tsp salt
butter for frying

When it comes to actually making them, it really comes down to getting the thickness right, which the description in the book is similar to what we look for. Not only were these breakfasts at least 1 weekend a month as a kid, they were quite often also brinner (breakfast for dinner, especially on Fridays during Lent) and also form the centerpiece for our Christmas Eve blintzes.

I'm not sure why the recipe calls for leaving it overnight, there's no leavening in it that needs to work its magic (unlike my favorite-ever oatmeal buttermilk pancake recipe http://www.epicurious.com/recipes/food/views/oatmeal-buttermilk-pancakes-101971).

I grew up eating what we called English pancakes (which, I've been told, are called Swedish pancakes in England) - 2 eggs, 2 cups of flour, 2 cups milk. Top with butter, sugar, and lemon juice. Roll up to eat. I love seeing all the variations.