We always do a Halloween lunch party at work, and I feel this (nonexistent) pressure to bring something new every day. I've already done pumpkin cheesecake, candy corn cookies, pumpkin praline cake, apple cake, etc., etc. I found this recipe from the blog formerly known as "Culinary Concoctions by Peabody" and is now known as Sweet Recipeas. She pumpkinized and otherwise modified a recipe she got from Bakergirl, called Gingerdoodles or Snickersnaps. 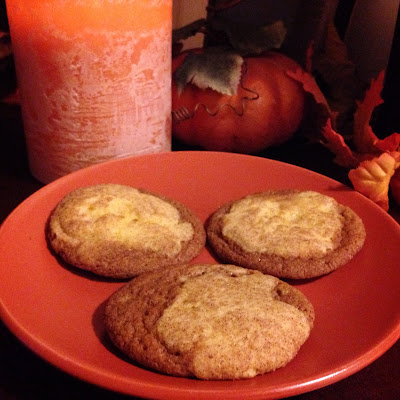 I'm still reeling from realizing I had to make two different doughs, but whatever, I had let two sticks of butter come to room temperature and just made half batches of each dough. This was only a test anyway. And after my fingers were covered in soft sticky dough after the first tray (and after I dropped the back three into the bottom of the oven on their way into it, prompting a smoky oven fire, a new use of grill tongs, and managing a german shepherd mix who is terrified of kitchen fans), I decided that although neither recipe instructs you to, I would chill both doughs a few hours. It made a world of difference. I wouldn't attempt this recipe again without some chill time.

I'm not tasting much in the pumpkin cookies. Perhaps they need more spices. I would bake the gingersnap dough on its own and be perfectly content. They are perfect. The pumpkin snickerdoodle needs work, perhaps it could be slightly less cakey and slightly more flavorful. Maybe some vanilla extract even. But this is a good start.

Mix 1 1/2 cups sugar, the butter, pumpkin, and eggs in a stand mixer with paddle attachment.
Add in flour, cream of tartar, baking soda and salt and mix on low until fully combined. Set aside.*

Cream together butter and sugar. Add molasses and egg and continue beating. Add flour, baking soda, salt, cinnamon, cloves, and ginger and mix until combined, scraping down the sides of the bowl as needed.*

Combine cinnamon and sugar in a small bowl and set aside for rolling dough in.

*JennyBakes says - make it easier on yourself and chill the mixed doughs for a few hours before trying to mash them together and bake them.