When I was trying to decide what to make for my workplace's annual holiday luncheon, I had a hard time. I feel pressure to make a fantastic dessert and not to repeat myself, but I had already made Buche de Noel, stollen, gingerbread, Lemon Gingerbread Wonderland Cake, Cocoa Pomegranate Pavlova, and a striking Wintermint Cake.

I had pears in my head and that's the direction I pursued. I couldn't make a pear tart because my tart pan is missing its bottom, so I went looking for pear cakes. One recipe had a maple frosting; that sounded good. Another had a whipped brown sugar buttercream. I used that recipe but ran out of brown sugar before I got to the icing, and ended up making a cooked flour icing. I'm not sure what I think of that one so I'll just link to it (I've tasted good cooked flour icings so I'm guessing baker error!). If you want the brown sugar buttercream, please follow the link to the original pear cake recipe. 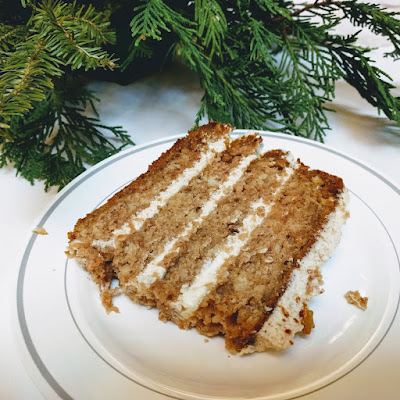 My co-workers seemed to enjoy this cake. I was worried it was too moist, because after making the pear puree I just dumped it all in rather than measuring. But the technique used with the pears makes the freshest pear flavor in the cake! I think I might like this better with a cream cheese icing, or that original maple idea, but the cake itself is worth trying for sure.

Jenny's notes:
I used an immersion blender for the pear-sugar mixture.
I used 9-inch cake pans.
I wonder if pear nectar would have been a decent substitute for all the pear hassle, but can't recommend it yet!