I have been watching the new episode of Martha Bakes (not a paid advertisement) and this season she is focused on what she calls healthy baking and is really more about alternative flours. (I clarify this because just using an alternative flour does not necessarily cut down on carbs, but can, so your mileage will vary as to if the alternatives are healthier.) Many of the recipes seem to come from a newer cookbook by Martha, A New Way to Bake.

The pumpkin spelt scones she made looked good and I had not yet tried spelt in baking, which is not low-carb but is supposed to be easier to digest than all-purpose flour. One of the blogs I use frequently, Chocolate Covered Katie, seems to use spelt flour most often! Most places that discuss spelt recommend using only half spelt in a recipe because using all spelt flour can cause structural problems. Martha referred to this as creating a "tender" texture, and I decided to go with it for the first time. Next time I'd mix spelt with other flours, because the others were right! But these were still tasty. I did use coconut sugar instead of real, to try to cut back some on the carbs. 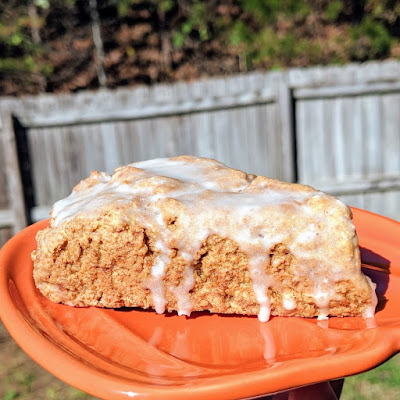