Enchiladas and Beans from The Austin Cookbook by Paula Forbes

One of the cookbooks I was sent in February from the ABRAMS Dinner Party is The Austin Cookbook by Paula Forbes. I wasn't as intrigued with the baked goods as with some of the savories, so I decided to try a few dishes. I mean, this is JennyBakes, and I definitely baked these enchiladas.

I made a huge pot of vegan lentil chili that was too spicy for us to eat, but I still have a sneaking suspicion that I grabbed the cayenne when I was supposed to use paprika, and you can only imagine the difference in heat that would create. Luckily my co-worker, consumer of all things spicy, took it off my hands.

I also made the pimento cheese because I wanted to see how Texan pimento cheese differed from South Carolina pimento cheese, which I have been consuming ever since moving here. It was a bit spicier, not as creamy, and the green onions were a tasty addition that would be good in any pimento cheese! 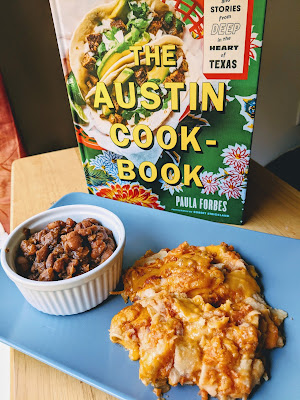 I challenged myself to make a vegetarian meal from this very meat-heavy cuisine and cookbook, so I made the ranchero sauce from the last chapter, full of pantry recipes. I replaced the chili con carne in the "chili con carne" enchiladas with ranchero sauce (the insides were always only cheese.) I made "Traditional Pinto Beans" on the stove, which take about 3-4 hours total but were super tasty, the true hero of all my experiments, and winner for recipe I'll most likely make again soon. Instead of turning them into refried beans, which was my original plan, we just ate them as is. Without the optional edition of pork, of course.

Two days later, I used leftover ranchero sauce and leftover pinto beans to whip up huevos rancheros for a light supper. The recipes keep on giving!


This post is sponsored by ABRAMS Books, as part of the ABRAMS Dinner Party. All experiences and opinions are my own!
at 12:00 AM