I read a lot of fiction, as most of you know. Recently I read Our Homesick Songs by Emma Hooper, about a dying fishing village in Newfoundland and the people who live there. Most of the residents are moving away for work. In one scene, the Mom from the central family sends her children, Cora and Jack, to buy something from the bakery to celebrate their last day as a family before the parents start trading off traveling "up north" for work.


"They got the only pie, dark berries and dark molasses crust, and continued on home..."

Their mother Martha approves of their selection.

So this of course set me off on an internet research rabbit hole. There aren't many places online to find the recipe for a lassie tart, although if you just look for Newfoundland tart or Newfoundland molasses tart, a few more come up. They all agree the traditional berry (which is made into a jam before filling the tart) is the Partridge Berry, but that was not a berry I could get my hands on, not in frozen form or in jam. Several bakers who had made the tart used lingonberries, so I did that as well. 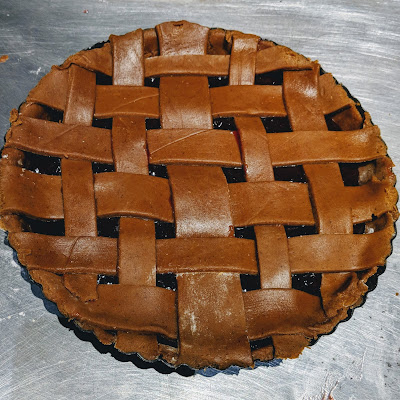 The tart has a lattice top so I was refreshing my skills by looking at tutorials for them, and encountered a "plaid" pattern with varying widths of lattice that I really liked. Unfortunately I didn't really pull it off; my tart just looks like I didn't cut my lattice evenly, not like I did so intentionally. This molasses dough is pretty soft and not as easy to work with as typical pie dough.

Ultimately I made the recipe from the Globe and Mail, and will include it in its entirety below, but should say that I used a 12 oz jar of lingonberry jam instead of making any (and that was just about right for one 8-inch tart. I can't see this recipe making enough pastry for 2 complete tarts as it says it will. In the end this is a fairly simple recipe, perfect for a place with a lot of molasses and jam on hand like Newfoundland. I wonder if this could be adapted slightly for Thanksgiving - I wouldn't use all cranberries, I don't think, but maybe half (or, you know, cranberry sauce) and maybe add some orange zest to bring out the orange pekoe tea in the crust. It's a keeper. 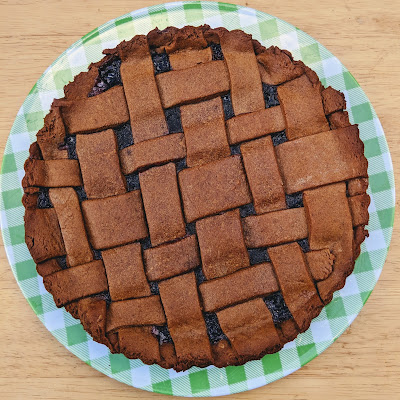 Murray McDonald's Lassie Tart
(from The Globe and Mail)

To make the pastry dough, cream the butter and molasses. In a separate bowl, sift together the flour, cinnamon, cloves, ginger and salt. In a small bowl or cup, stir the baking soda into the hot brewed tea, then add immediately to the butter-and-molasses mixture and stir well. Add dry ingredients to the same bowl and mix until just combined. Pat the dough into a ball and flatten, wrap in plastic wrap and chill it in the fridge overnight or for at least 2 hours.

To make the partridgeberry jam, place the berries, lemon juice, lemon zest and sugar in a heavy-bottomed pot and simmer over medium-low heat for 1 hour. Set aside and let cool.
To assemble the tarts, roll out the dough to 1/8 inch thick and 10 inches round. Transfer to an 8-inch tart pan and trim the overhanging edges. Form a ball with the scraps, roll out the dough and cut out strips for the lattice top.

Fill tart with 1/2 inch of partridgeberry jam. Place the lattice overtop and use a fork to crimp the edges of the pastry.