Peter Sherman is the founder of BarBacon in NYC, a restaurant centered around bacon. His new cookbook, The Bacon Bible (by Peter Sherman with Stephanie Banyas,) came out April 23rd. It has a lot of what you might expect but also some surprises. I'm relatively new to eating meat again but of course one of the great pleasures of a meat eating life is bacon. BLTs! Cobb salad!  I wanted this bacon to be special so I bought local, from the Swamp Rabbit Butchery.

I found I had marked a bunch but I kept coming back to this sweet and savory brunch recipe and decided to give it a try. Since not everyone in my household eats bacon, I made a half recipe by cutting everything in half and just using 4 eggs, and cutting back on cooking times a bit (20-25 minutes with the foil, 15 without) and it worked perfectly. The bacon is present but not overpowering, and overall the dish is not too sweet and has a lot of balance (don't skip the orange rosemary syrup which helps with this.) 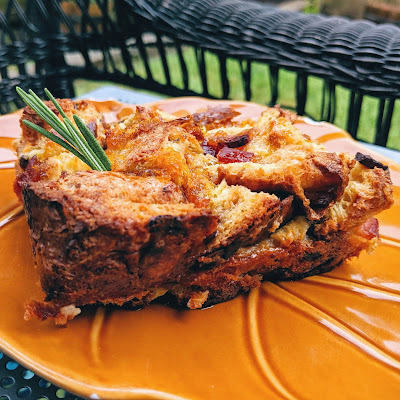 Preheat the oven to 300 degrees F. Spread the bread in a single layer on a baking sheet and toast in the oven until a pale golden blond color, turning once, about 12 minutes. Remove from the oven and let cool slightly. Increase the oven temperature to 350 F.

Grease a 9x13-inch baking dish with butter and nonstick spray. In a large bowl, whisk together the eggs and sugar. Add the milk, cream, orange zest, and vanilla, and whisk until smooth. Stir in the bacon. Add the bread to the custard mixture and stir well to combine. Let the mixture sit, stirring a few more times, for 20 minutes, or until the bread has absorbed all the liquid.

Transfer the bread mixture to the prepared pan, cover with aluminum foil, and bake for 45 minutes. Remove the foil and continue baking until puffed and the top is golden brown, about 30 minutes longer.  Cut into squares and serve with the Rosemary-Orange Maple Syrup and a sprinkle of confectioner's sugar.

In a small saucepan, combine the syrup, zest, and rosemary, and bring to a simmer over low heat. Cover, remove from the heat, and let steep for thirty minutes. Remove the zest and rosemary and reheat before serving, if needed. Makes 1 cup.

*If you prefer your french toast made with brioche or challah, feel free to use either, just add 1/3 cup golden raisins and 1/4 tsp fennel seeds to the egg mixture. (Or if you're like me, just wing it... I found a challah with regular raisins and called it close enough.)

I had a few pieces of bacon leftover so I made chocolate covered bacon from the candy section of the cookbook. 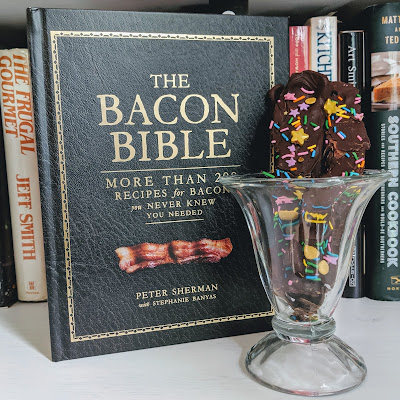 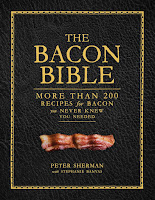 Other recipes I've marked to try include:

This post is sponsored by ABRAMS Books, as part of the ABRAMS Dinner Party.
at 12:00 AM