I've started experimenting with potential birthday cake recipes since next month is my birthday month. I even keep a group in Pinterest marked "Birthday Cake" for potentials as I encounter them, then of course I have shelves of cookbooks that also hold potential. Hopefully I'll try a mix. First up is a recipe from the internet - Chocolate Sheet Cake with Whipped Salted Caramel Ganache Frosting. 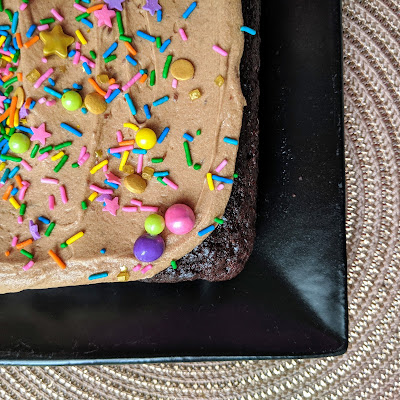 This recipe comes from Edd Kimber, aka The Boy who Bakes. I guess he won the first season of The Great British Bake Off but we didn't start watching until Season 2, so I first encountered him in one of the many baking Instagram accounts I follow (@theboywhobakes.) He also posted a video about making this cake that shows how quick and straight-forward of a recipe it is. The flavor mirrors the infamous Martha Stewart salted caramel chocolate layer cake that everyone made a few years back, that was messy and divine. I would say this recipe is similar in flavor but much simpler to assemble, so that's a win/win. See more notes from my attempt after the recipe! 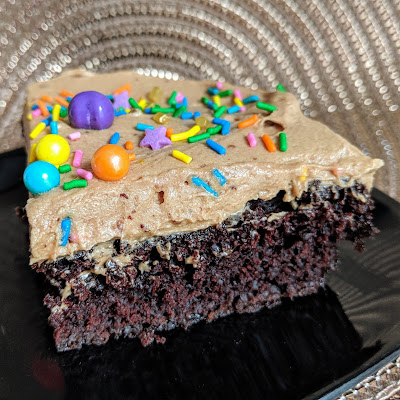 Chocolate Sheet Cake with Whipped Salted Caramel Ganache Frosting
(recipe from Edd Kimber, not sure if recipe copyrights are different in UK, trying to give all credit where credit is due since it's available online!)

Preheat the oven to 350F/180C/160C fan and lightly grease a 9x13 inch brownie pan, lining with a strip of parchment paper. The excess parchment should hang over the sides of the pan which will make removing the cake a lot easier later.

Make the ganache first as it needs a couple hours to chill before whipping. Place the chocolate into a medium bowl and set near the stove. Place the cream into a small saucepan and bring to a simmer. Place the sugar into medium sized saucepan and place over medium heat and cook until melted and caramelised to the colour of a rusty penny. Once caramelised add the butter and salt and stir to combine. Add the cream in two additions, being careful as it will bubble up viciously. Once the bubbling has subsided you should have a smooth caramel, if the cream wasn’t hot enough you may have a couple lumps which will melt if you just pop it back over low heat and stir for a couple minutes. Stir in the vanilla and then pour the hot caramel over the chocolate, set aside for a couple minutes before stirring together to form a smooth ganache. Pop the bowl in the fridge for a couple hours or until thickened. Make sure you don’t leave the ganache in the fridge for too long as it will become too firm to whip, it still needs to be spreadable.

For the cake sieve the flour, cocoa, baking powder, baking soda, salt and brown sugar into a large bowl and use a whisk to combine so everything is evenly combined. Make a well in the middle of the bowl and pour in the remaining ingredients and whisk together until a smooth cake batter is formed. Pour the batter into the prepared pan and bake in the oven for about 25-30 minutes or until the cake springs back to a light touch and it is slightly pulling away from the sides of the pan.

What I love about this recipe is that it is pretty forgiving. I was too lazy to use my scale so I searched online for ounce/cup equivalencies for the ingredients and may not have gotten them exact. The cake still worked. All of my 9x13 pans were occupied so I divided it into 2 9" square pans. The cake still worked. I had a few clumps in the caramel that refused to melt back in despite his reassurances, and then the milk chocolate didn't melt as smoothly as I would have liked (it was harder to find milk chocolate bars for baking as I usually use dark, so I bought Cadbury dairy milk bars and they are probably more intended for eating) so you can seem chocolate and/or caramel bits in the frosting but the cake still worked. I didn't use his recommended cake toppings since I was birthdayfying it and also am trying to get rid of these sprinkles that I keep using on everything, and the cake still worked. It is probably more sophisticated with the cocoa nibs and nuts, so I'd still recommend doing that.

Also I don't have a way to transport a 9x13 cake outside of its original pan so part of my cake division strategy was purely so I could take half to work!
at 12:00 AM