I think anyone who bakes has Tartine on their radar, one of the bakeries that brought artisan baking to the forefront in the United States. Their cookbook of the same name was originally published in 2006, and a revised edition with 68 new recipes came out October 1, 2019. I had a copy to play with from the publisher through NetGalley. I'll put a list of the recipes I want to try at the end of this post, but my husband always tries brownies at a new bakery as a "test" so I decided to go with something simple. 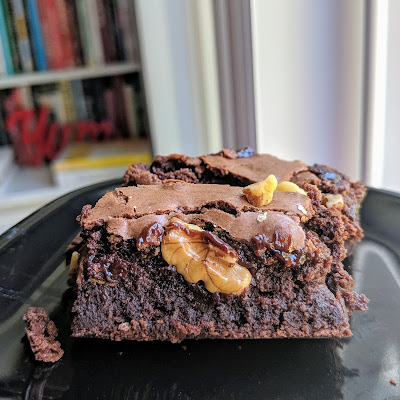 I was surprised to find a different technique than I'd ever used for brownies, and I've made a lot of brownies. This is clearly a recipe they have perfected over time, and a note in the recipe says this reflects their preference for "fudgy" brownies. They also have a recipe for making this same recipe slightly differently for ice-cream sandwiches, and a version that is for rocky road brownies. I went rogue and made a halfish recipe because I had misremembered how much chocolate I needed to buy.

Sift the flour into a small mixing bowl. Set aside. In a medium mixing bowl, combine the eggs, sugar, vanilla, and salt. Using a stand mixer fitted with the whisk attachment, beat on high speed until the mixture thickens and becomes pale in color and falls from the beater in a wide ribbon that folds back on itself and slowly dissolves on the surface, 4-5 minutes. Alternately, use a mixing bowl and a whisk to beat the ingredients until the mixture falls from the whisk in a wide ribbon. Using a rubber spatula, fold the cooled chocolate into the egg mixture. Add the flour and fold it in quickly but gently with the rubber spatula so that you don't deflate the air that's been incorporated into the eggs.

Pour the batter into the prepared dish and smooth the top with the spatula. If you are using nuts, evenly distribute them across the batter. Bake until the top looks slightly cracked and feels soft to the touch, about 25 minutes. Let cool completely on a wire rack.

Using a sharp knife, cut into twelve squares, or whatever size you desire. The brownies will keep in an airtight container in a cool place for up to 1 week.

Notes from JennyBakes: Okay so this is my bad but I did a half recipe in a 9" square pan but used 3 eggs. I tried baking for 20 minutes but went to the full 25, was worried about overbaking and ended up underbaking, I think. A bit gooey in the middle but I stuck them in the fridge and they'll be fine. I also forgot to put the walnuts on until they'd baked 5 minutes. I loved the technique of beating the eggs and brown sugar - I've done that with white sugar before (see Alton Brown's cocoa brownies) but I've never used brown sugar in brownies. The texture before adding the chocolate and flour was very viscous and the batter was like chocolate marshmallows.

Tartine (Revised edition) came out October 1, 2019, and like I already stated, I had a review copy.

Other recipes I've marked to try: