I continue my experiments from The Nordic Baking Book, but don't want to post all recipes just in respect to others actually buying the book. Instead I thought I'd reflect on my experience to see if I could do better next time. 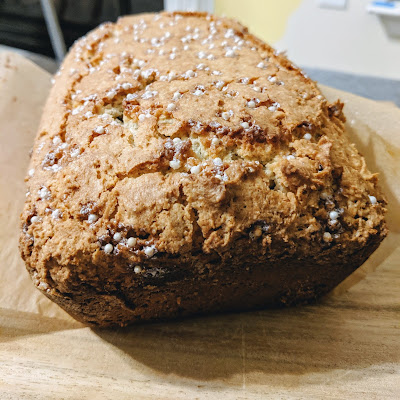 I love cardamom, and love that the Swedish love cardamom, so when I saw a recipe for cardamom cake I knew I'd end up trying it. The recipe is fairly simple but I should have known when I saw it was a butter cake that I would struggle.

Why does the world want to make butter cakes when they are always dry? Or what is it that I do wrong that everyone else does right? The recipe says the batter will be quite thick, and it was. But it also took at least 20 minutes longer than specified for the toothpicks to come out mostly clean, and I still had a stripe of somewhat less baked cake in the rise of the upper half.

In the one picture of this cake in the giant cookbook, it's in a smaller bundt type shape, and it makes me wonder if it doesn't bake more evenly in that kind of shape. But the recipe calls for a loaf pan.

I liked the idea in the beginning of the recipe of adding the generous amount of spice during the butter and sugar creaming process. I would like to try that for more recipes (the only other time I have done this is when rubbing citrus zest into sugar before creaming, always with positive returns.)

This recipe also calls for 3/4 cup sour cream. I had some leftover ricotta in the fridge and almost just tried half and half on a whim, but thought I should make it as stated first. The batter was a rather unappealing gray after adding the sour cream (to the cardamom infused butter and sugar which was already a strange color.)

I'm going to try some of the "cake moistening" tips I found on the internet when I eat this for breakfast, but I'm also wondering if the conversion might be at fault, either in temperature or measurements. I was reading the section about yeast, because I want to make buns, which seem very important in nordic nations, but wow who would have expected yeast to vary so substantially in different countries? But it does. Fresh yeast is preferred and simply what is used in Scandinavia. It would be hard for me to find in South Carolina, and even if I did, it would not necessarily be the same amount by weight. And I will need to convert it to dry yeast. But - should I convert it against Scandinavian equivalents or American? Argh. It is currently clear as mud but I suppose all I can do is try one way and then evaluate.

Can I make french toast out of a cake like this? Maybe that would be a better use of it.... I can at least toast it. It's pretty dang dense.
at 12:00 AM