One of my goals for this year is to get better about weekday dinners, and to learn more recipes that might be palatable for younger eaters. I was poking around the internet and found a recommendation for Every Day is Saturday: Recipes + Strategies for Easy Cooking, Every Day of the Week by Sarah Copeland. This recipe is in the "Projects" section because it's just as easy to make two at once, and then you will have made an extra! I like the unusual sections in this cookbook because it's based on type of meal or rather need like quick dinners, last minute friends, etc.

I made a few mistakes with this recipe but I don't think they mattered to the final taste, but it's definitely not as pretty as the one in the cookbook! I'll add some notes at the end to talk about what I could have done better. 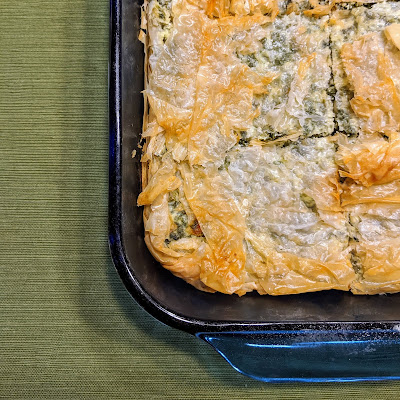 Set the spinach in a colander to drain while you prepare the remaining ingredients, then place it in the center of a large, sturdy dish towel. Squeeze out as much moisture as you can. (If you wash the towel shortly after, the color won’t stain.)

Heat a large pan over medium heat. Melt the butter, and pour off and reserve about 5 tbsp.* Add the onion to the skillet and cook until soft but not brown, about 5 minutes. Transfer to a bowl with the squeezed spinach, and add the ricotta, eggs, feta, dill (If using), lemon juice, salt, and pepper.

Bake until the phyllo is cooked through, shiny, and golden brown, 40 to 45 minutes. Remove and let cool until just warm to the touch before cutting. Cut into 9 or 12 pieces and serve warm or at room temperature. Refrigerate any leftovers in an airtight container for up to 3 days.

DOUBLE UP
One pan is a great start, but two pans of spinach pie will have you set for one hot meal, plus packable lunches and late-day snacks. Cool one pan completely and freeze, well wrapped (in plastic wrap and foil, right in the pan), for up to 2 weeks. To eat, bring to room temperature first, then warm in a hot oven for 5 minutes.

Notes from JennyBakes: Thawing the spinach and phyllo requires some thinking ahead and this makes this recipe more challenging (I know I need to do better at planning!) Making a double batch makes sense, maybe one in a disposable pan, because otherwise you just throw phyllo away.

Phyllo is tricky; you need to keep a damp towel on top of it every second you aren’t working with it directly. It’s ridiculous to melt all the butter in the pan only to pour and measure it out. I melted 3 tbsp in the pan (and that’s probably too much for one small onion!) and 5 tbsp in a ramekin for the assembly.

I might use nonstick spray for everything except the top next time, since the filling has so much fat already and it would assemble more quickly.